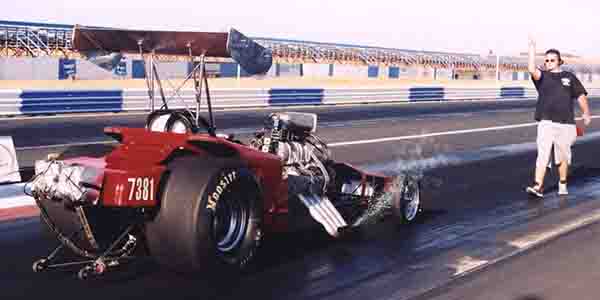 In racing, maintaining the right fuel mixture for the setup can mean the difference between powerful, reliable engine performance and broken parts.

Fuel mixture variations are often the reason one engine build wins in racing and another blows up.  Fuel mixtures can be measured using air-to-fuel ratio or AFR. AFR is the parameter used in electronic fuel injection, and it is the best tuning tool for racing mechanical fuel injection as well. 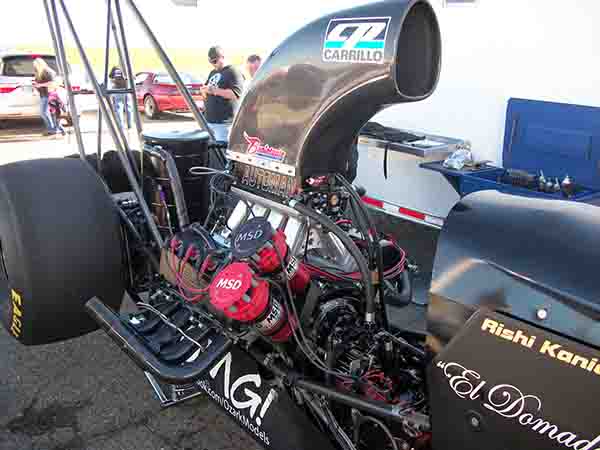 NHRA A-Fuel Dragster engine runs a high percentage of nitro at 90% that provides about 75% of the burn power from monopropellant combustion. AFR is extremely fat at about 0.35 to 1 in this oxygen-rich mixture of mostly nitro.

In racing mechanical fuel injection, the fuel pump and jetting determine how much fuel weight goes into the engine. The fuel can be measured in gallons per minute (GPM), cubic centimeters per second (cc’s per sec.) or other units of measure. These can be converted to pounds of fuel.

An easy way for computing air-to-fuel ratio for tuning is to determine the air weight and fuel weight per revolution. This is the approach that we use throughout our technical manuals and our fuel injection jetting calculator. It is simple since it is independent of engine speed. More engine speed makes more pounds of air and more pounds of fuel, but the ratio is not changed by the engine speed.

The table below shows recommended values for mechanical fuel injection common in racing.

Typical AFR values for normally aspirated and blown engines are shown in the table.  The smaller the number on the left of the ratio, the richer the ratio. The stoichiometric value is the ratio where all of the fuel burns with all of the oxygen from the air. For gasoline or alcohol fuels, that value represents only the amount of air and fuel that burns. Fuel mixtures for drag racing and most other forms of racing are run a lot richer, especially with mechanical fuel injection.

When paired with higher compression and/or higher boost, more enrichment of alcohol fuels can retard detonation or overheating. This can result in more power. However, the extra fuel from a rich mixture of methanol, ethanol, or gasoline does not directly contribute to power. Extra fuel from enrichment does not burn. Instead, it goes out the exhaust as wasted fuel. Increased enrichment of methanol or ethanol fuels dramatically reduces combustion chamber temperatures. Gasoline is run a bit rich as well for off idle throttle response. However, gasoline is limited in the amount of enrichment since extra fuel will fowl out the spark plugs.

Extra fuel in rich mixtures form droplets.  Part of the ignition energy is consumed in vaporizing the droplets. This reduces the ignition strength that ignites the mixture.

Excess enrichment can severely handicap power in the second and most important vapor-to-combustion phase. 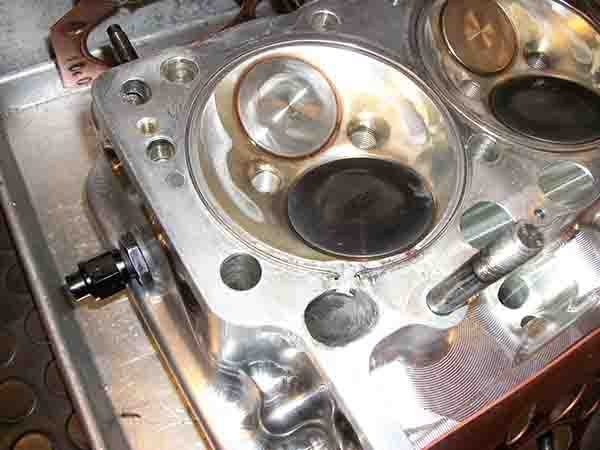 This is a blown cylinder head O-ring due to excess heat from an AFR that was not rich enough.

Example: In a dramatic methanol fuel mixture test, a 2,000 hp blown alcohol engine combination was altered to test excessive enrichment. This was done to try to get extra power from the oxygen in methanol fuel. The mechanical fuel injection was jetted to deliver over twice the amount of methanol to the engine than conventional amounts. This excess amount of fuel instead handicapped combustion from excess “ignition vaporization.” It was so excessive that power was reduced to 550 hp at full throttle, full boost and full RPM. That is a loss of over 70 percent of the power from excess enrichment. In a subsequent test of a similar engine with greatly reduced methanol enrichment, power was restored.

Sprint cars (circle racing) typically run normally aspirated engines on methanol. Rich AFR values are common, ranging from a low of 3.5 to 1 to a high of 4.8 to 1.  Because sprint cars run lightweight cooling systems, they are purposely run that rich for cooling. However, sprint and circle racing cars with better cooling systems do not need as much extra fuel for cooling. As a result, they can make more power with less extra fuel weight needed for cooling.

In a normally aspirated drag racing engine with 5 to 1 AFR, over 20 percent extra fuel is supplied for cooling. In contrast, during our drag racing days we ran an AFR of 3.4 to 1 in our high compression, blown methanol Hemi engine. 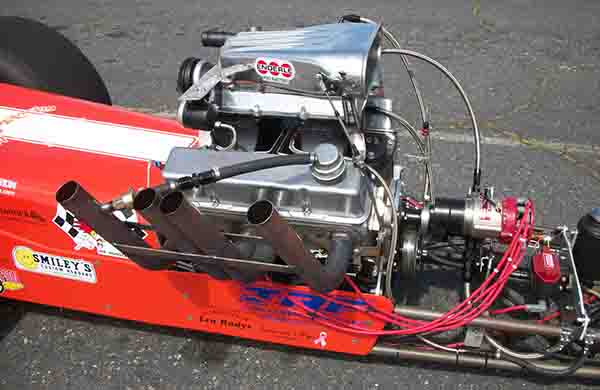 Fuel mixtures for drag racing run a lot richer. This one runs an AFR at nearly 5 to 1.

In our high compression, blown methanol Hemi, we tested different AFR’s ranging from 3.1 to 1 up to 3.7 to 1:

AFR of 3.1 to 1 had misfired cylinders from excess cooling

AFR in the middle at 3.4 to 1 provided best performance

AFR of 3.7 to 1 melted engine parts from excess heating. 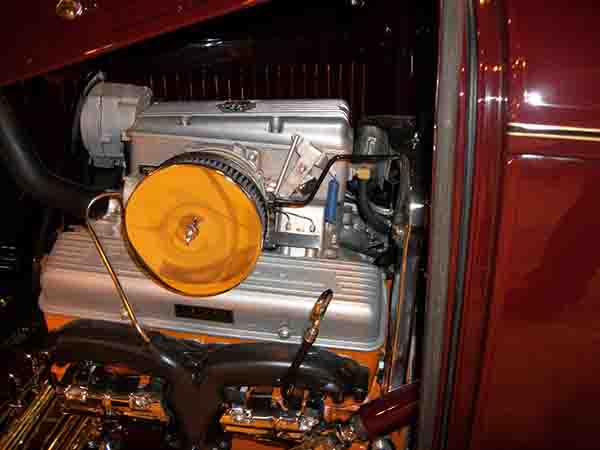 Nitro fuel mixtures are run a lot richer than other common fuels used in drag racing. Nitromethane has oxygen in the fuel that contributes to combustion with enough oxygen to support combustion as a monopropellant. The AFR for different nitro mixtures varies according to the mixture ratio.

A few years ago, we did an extensive nitro test program in our blown drag race altered racecar. We started with a very low nitro weight of 6 percent with 94 percent methanol. We increased the volume of nitro to 9 percent for that mixture weight with fuel injection jetting adjustments for the proper AFR. The dragster went 8 mph faster and 0.2 seconds quicker ET than the methanol setup with all else remaining the same. Both speed and ET changes were significant and indicated a power increase close to 10 percent for 9 percent volume increase at 6 percent mixture weight. 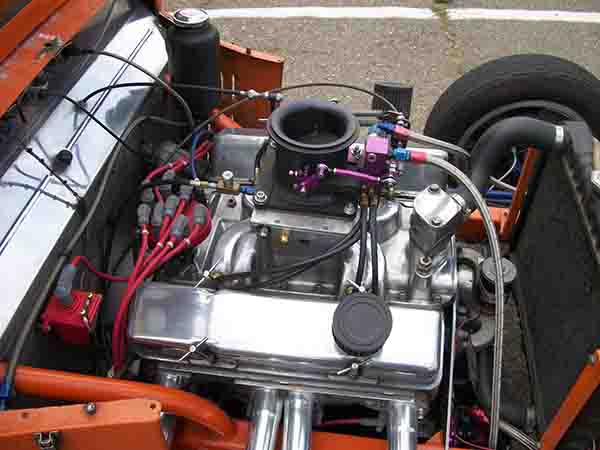 A simple Ron’s mechanical fuel injection with correct fuel pump size and jetting runs well with methanol AFR of around 5 to 1.

(1) Nitro weighs more than methanol, so more fuel is needed.

(2) Nitro has more oxygen for hotter combustion, so more fuel is needed.

(3) Nitro has less fuel in its fluid because more oxygen is in its fluid, so more fuel is needed.

All three of these factors create the need for further enrichment when nitro is added.

However, for low percentages of nitro, too much extra fuel under power cools combustion and makes ignition difficult just as it does with alcohol fuel. It creates a reduction in flame speed and creates incomplete combustion. Through the years, many racers who added low percentages of nitro went slower. Some even damaged their engines. Not controlling fuel mixtures appropriate to the amount of nitro was the reason.

In racing, maintaining the right fuel mixture for the setup can mean the difference between powerful, reliable engine performance and broken parts.