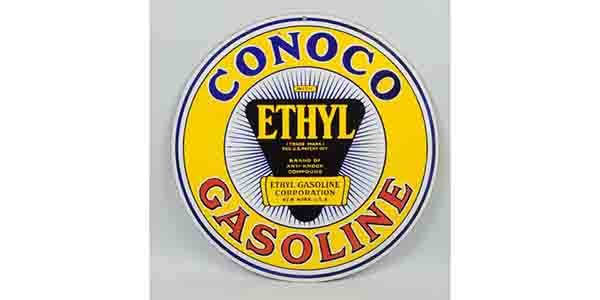 The more efficient, high-compression engines were necessary not only to make cars run faster, but because the “experts” had determined that the world’s oil supply would be depleted by the spring of 1940.

As a result of their research, the first ethyl “premium” gasoline went on sale in Dayton, OH in the spring of 1923.

General Motors then formed the General Motors Chemical Co., with Kettering serving as chairman and Midgley as president. GM then approached Standard Oil of New Jersey and the two companies formed the Ethyl Gasoline Corp.

Since DuPont was a one-third owner of GM at the time, the three major corporations all had a hand in the development and marketing of the new leaded gasoline. All was good for a while.

Then an explosion in Standard’s Oil Research Laboratory in October 1924 left 35 men seriously ill from breathing tetraethyl lead fumes. Eight men went to the hospital where five of the men died; one more ended up in a straight jacket. He had gone madly insane.

To make matters worse, rumors began to circulate about motorists who had literally gone insane while driving.

GM and Standard hesitated, hoping to ride out the storm of controversy. Meanwhile six more men died from injuries related to the explosion. GM quickly ordered production stopped and all sales of the product halted immediately.

Scientists at the DuPont Company were well aware of the danger in manufacturing the new ethyl gasoline, but also had determined it was safe for the customer in its diluted form as used in gasoline (which was 1/10th of one percent by volume).

A federal committee was appointed to investigate and came to the same conclusion. The ethyl gasoline was safe for the consumer. The DuPont Company was willing to accept the risks of manufacturing and there was no danger to the general public.

By the mid-1930s, the alliance between General Motors, DuPont Corp. and Standard Oil to produce ethyl leaded gasoline succeeded beyond all expectations: 90 percent of all gasoline sold in the United States contained lead.

Public health crusaders who found this troubling still spoke out in political forums, but competitors were not allowed to criticize leaded gasoline in the commercial marketplace.

In a restraining order forbidding such criticism, the Federal Trade Commission said ethyl gasoline “is entirely safe to the health of [motorists] and to the public in general when used as a motor fuel, and is not a narcotic in its effect, a poisonous dope, or dangerous to the life or health of a customer, purchaser, user or the general public.”

The Albemarle Paper Manufacturing Company had a very aggressive board of directors in 1961-1962 who wanted the company to diversify and increase profits. They picked the Ethyl Corporation even though they had no experience in manufacturing chemical products other than the manufacturing of paper.

In 1972, the Environmental Protection Agency began a regulatory process that phased out the use of leaded gasoline. The decision was primarily based on the need for catalytic converters to reduce other pollutants such as carbon monoxide and nitrogen oxides. Leaded gasoline had to be phased out because of its effect on catalytic converters. The lead in the gasoline contaminated the inside of the converters reducing their effectiveness.

Now you know the story behind ethyl gasoline. It hardly seems possible today that once we could roll up to the gas pump and buy ethyl 105 octane for 55 cents a gallon and never give it a second thought.

Advertisement
In this article:Memory Lane