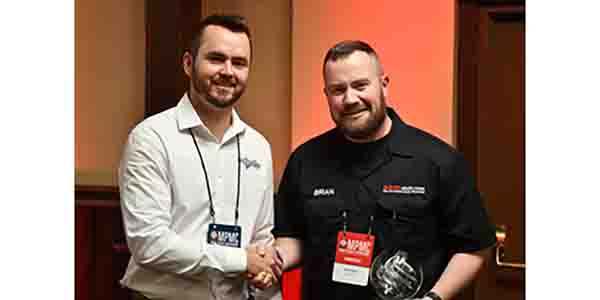 The Robert E. Petersen award is named in honor of the man to whom the motorsports industry owes so much, and is presented to an individual from the media who has made a positive impact on the industry and MPMC during the previous calendar year.

Lohnes’ career began 18 years ago when he was a tech inspector at New England Dragway in Epping, New Hampshire. Having grown up in a car-loving household with a father who was passionate about drag racing and restoring cars, Lohnes knew he wanted to go into automotive journalism/broadcasting at a young age.

“There was nothing better than watching the NHRA races on Sundays as a kid. It’s still kind of unreal to me that I can support my family by doing something that I love so much. I’m fortunate,” said Lohnes.

Currently, he serves as editor-in-chief for BangShift.com, an online automotive news publication. Besides lending his announcing voice to NHRA and several other racing organizations and events, he also hosts “Motorhead Garage” on the Velocity Channel, along with several other television shows. If that weren’t enough to keep him busy, Lohnes also contributes to Diesel Power magazine, National Dragster magazine and other notable automotive publications.

“It is surreal to be recognized by the industry and my peers in this way” Lohnes said. “I work hard to do the best job that I can, and like everyone else, I do not do it for accolades. I do it because I love what I do. This recognition is unspeakably cool and humbling. I looked around the room when I received the award. So many people who I respect and look up to were there. It was pretty overwhelming. I truly and honestly love this industry, and to have the industry recognize me for my work is just unbelievable in the best way.”