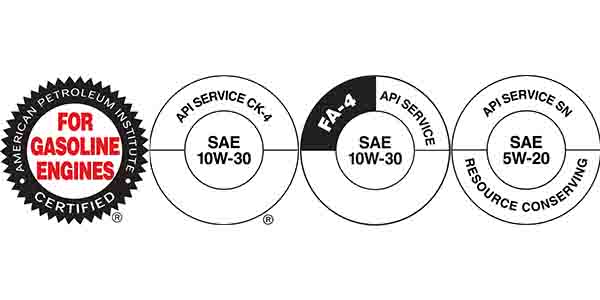 It’s always helpful at the end of each year to reflect on what’s been accomplished and where we think our industry is headed. I think we should do this for the three types of oils you Engine Builder readers typically encounter.

It’s always helpful at the end of each year to reflect on what’s been accomplished and where we think our industry is headed. I think we should do this for the three types of oils you Engine Builder readers typically encounter:

The API cautions you regarding oil marketers saying their oil “provides or meets API performance.” Look for the API “starburst” or “donut” label on the container proving they actually tested and licensed the product they’re selling. If they don’t have either or both symbols, they probably don’t have the license.

We have a full year under our belts with the new API CK-4 and FA-4 performance categories. Since CK-4 is a performance upgrade from CJ-4 with better oxidative stability, better viscosity control (shear stability), less air entrainment (aeration), and improved particulate filter/catalyst durability; and is completely backward compatible; its acceptance in the marketplace has been relatively straight forward.

As of press time, API has licensed 623 separate products, which satisfy the CK-4 performance requirements according to Kevin Ferrick, senior manager of API’s Engine Oil Licensing and Certification System. So, all is good, until the next DEO performance upgrade occurs. CK-4 oils can be both SAE 15W-40 and 10W-30 grades.

API FA-4 has been more slowly accepted since its use is recommended only for engines which were originally designed to utilize lower viscosity oils (SAE 5W-30 and 10W-30 grades). To date, Ferrick states that 80 separate products have been licensed by the API for this smaller market. This performance category, which was designed to provide optimum DEO fuel economy (FE) improvement, will undoubtedly grow more rapidly as fleet operators and end users get more comfortable with lower viscosity DEOs and more new engines hit the streets. Beware of anyone recommending a wholesale switch to FA-4 oils. Only the OEMs know the lube oil appetites of their current and past engine designs. Check with your engine builder first.

There is at least one group out there recommending everyone switch immediately to FA-4 oils for their diesel engines. These people are only concerned with carbon emissions reductions. They couldn’t care less about your engine’s durability. In fact, they would prefer your engine’s immediate failure so it could be replaced with a 2017 engine design. Then they could brag about how much fuel they’re saving our country. They have no skin in your game. Don’t risk a $10,000 rebuild for a potential 1% FE improvement. An SAE FA-4 10W-30 oil is not necessarily the same as a CK-4 10W-30 oil.

Kevin also cautioned about oil marketers saying their oil “provides or meets API performance.” It’s actually quite simple. Look for the API “starburst” or “donut” label on the container proving they actually tested and licensed the product they’re trying to sell you. If they don’t have either or both symbols, they probably don’t have the license.

So, what’s next for DEO performance? Environmental activists will continue to push for reduced GHG emissions, which dovetails with fleet operators’ desires for improved FE performance. These will be the main drivers of further DEO development in the near future, although some work remains to be done on biodiesel fuel compatibility and oils for use with gaseous fuels. Diesel engines will also tend to decrease in displacement but with increased power density.

The original letter written by diesel engine builders to the oil industry over a decade ago requested testing to prove that the new DEOs were compatible with biodiesel fuels. The new CK-4/FA-4 performance oils have improved oxidative stability over CI-4/CI-4 Plus DEOs, and that will improve biodiesel compatibility somewhat, but if biodiesel fuel usage is to increase significantly, this issue will need revisiting. Most biodiesel fuels are less volatile than most ULSD fuels. This means biodiesel concentrations in the diesel’s oil sump can increase over time and operation. We need to determine whether or not this will adversely affect engine durability. Perhaps the next performance category will include additional testing to validate biodiesel fuel compatibility.

Since it took over a decade (about 12 years) to completely develop the new CK-4/FA-4 performance categories, I believe the oil industry should soon start developing the next set of performance specifications. Diesel engine design is rapidly changing, so the oil industry will have to march “double time” to keep up with new engine technology.

As CNG, LNG, and Propane have become more widely used in diesels, we should also start development of a gaseous fuels lube oil specification for use in transportation applications. Gaseous fuels burn much more cleanly and completely than diesel fuel, so lube oils for these engines could use significantly lower levels of dispersants and detergents. Higher combustion temperatures place increased stress on lube oil oxidation, so specifically designed GEOs (get it) for transportation applications are desirable. Ferrick says the API has this on their “wish list” of future oil specs.

I’m not as conversant with PCMOs as I am with DEOs, since I’m such a “diesel head.”  Fortunately, Ferrick offered to bring us up to speed on recent PCMO activity and specifications.

Current API SN and ILSAC GF-5 specifications were released in October 2010 for 2011 and older vehicles. Some oils meet both SN and GF-5. These carry the starburst and donut. The API “donut” can also be used for oils which are SN only. ILSAC GF-5 specifications are more stringent than API SN specs in the areas of fuel economy, emissions control system compatibility, and turbocharger protection. Both SN and GF-5 oils are acceptable for use with E85 fuels containing up to 85% ethanol (not methanol).  Don’t put methanol in these engines.

The API SP and ILSAC GF-6 specifications (designed to offer improved FE and engine durability) have been under development for some time now. Finalization of the new specs has been slowed due to delay in development of critical laboratory engine tests. Tests for cam chain wear and LSPI (low-speed pre-ignition) have now been finalized, and their results are out for approval by all the organizations involved.

Toyota has championed a new Sequence IVB valve train wear test, and this test is undergoing precision matrix testing to correlate all the test facilities around the world. This testing will likely complete in the first quarter of 2018.

If all this proceeds as planned, the new SP/ILSAC GF-6 spec will be issued after all approvals are received. But wait; then oil marketers will have a one-year period to develop their proprietary oil formulations and have them validated at independent test laboratories. Most industry experts, including Kevin, don’t expect this new specification to be licensable by API until late 2019 or sometime in 2020, if all goes well.

In the meantime, automobile manufacturers are under constant government and environmentalist pressure to reduce GHG (which means improved FE to us end users). One of the problems which has plagued turbocharged, gasoline direct injection (GDI) engines (of which there are many out there) is LSPI. LSPI is at best annoying, and at worst it can cause engine damage.

The delays in finalizing API SP/ILSAC GF-6 have resulted in manufacturers becoming increasingly concerned about the liabilities associated with LSPI. The LSPI test is now finalized, so Ferrick thinks the oil industry might develop an interim API SN PLUS specification (basically SN plus the LSPI test) in 2018 to address LSPI performance in GDI, turbocharged engines.  Auto manufacturers can then breathe a little easier while continuing to try to improve FE.

Japanese auto manufacturers have designed engines which can operate on lower viscosity engine oils. Since they are under constant pressure to improve FE, they have championed the inclusion of a 0W-16 GF-6 oil (about like NHRA Pro Stock oils) with even better FE. But American and European engine manufacturers aren’t comfortable with such thin oils yet.

Ferrick thinks the automotive and oil industries might treat the ILSC GF-6 specification similar to the latest API DEO specs. In other words, there might be a specification called GF-6A (and a corresponding Sequence VI FE test requirement) for most U.S.-based manufacturers. This would then be accompanied by a GF-6B specification (and a higher Sequence VI test requirement) for SAE 0W-16 and thinner oils preferred by the Japanese auto manufacturers. And this used to be a relatively simple industry.

As far as the future goes, look for ever-continuing pressure to reduce GHG emissions and improve FE. I think we will see universal acceptance of GDI and even more highly turbocharged engines. Since gasoline engines operate at higher oil temperatures than diesel engines (and higher temperatures means more oil oxidation) I think PCMOs will be formulated with even more highly refined (and synthetic) base stocks. So look for the cost of PCMOs to increase dramatically.

As I’ve stated previously, racing oils in the past were merely “arm-chair” formulations based off successful PCMOs. But all this started to change when Childress Racing and Joe Gibbs Racing asked Lubrizol to put some science behind racing oil development. This completely changed the way racing oils were formulated.

Today, savvy engine builders and racers have to decide which oil marketers to believe since there are no widely accepted racing oil specifications to test against. Don’t look for this to change in the future, because racing oils are such a small market, and as such, can’t support a myriad of lab tests needed to define a new performances category.

However, look for the racing oil (and hot rod oil) markets to grow significantly. I think that’s why there are so many new players in the marketplace. As DEOs and PCMOs go to lower and lower ZDDP levels due to phosphorus limitations designed to optimize catalytic converter and diesel particulate trap life, more end users will be forced to use racing oils or hot rod oils in their modified muscle cars and street machines.

The old STP was a great example. Trying to hold a screwdriver blade treated with STP has absolutely nothing to do with engine oil performance. All STP did was make the oil thicker; I know because Lubrizol formulated the product. I’ve spoken with many racing oil “chemists” who don’t know the first thing about organic chemistry or race engine oil appetites. Don’t obtain your hot rod or racing oil knowledge from them. Talk to organizations and marketers who have the resources to seek out the true knowledge and formulate successful products.

Future racing oil development will be more concerned with engine durability than increased horsepower in blower and turbocharged applications. Current engine configurations make more than enough horsepower, but engines are spun significantly higher, which increases friction and resultant piston scuffing. Piston speeds stress scuffing performance of the engines and oils significantly past what was traditionally thought possible. I look for the inclusion of some new chemistry to improve the scuffing performance of racing oils in high RPM situations.

I also look for an increased number of oil marketers providing “hot rod” or “muscle car” oils with increased zinc. As ZDDP levels diminish in DEOs (they’re already too low in PCMOs) more and more enthusiasts will purchase these products since bottled additives aren’t as safe as completely formulated oils.

Advertisement
In this article:API, Engine Oil