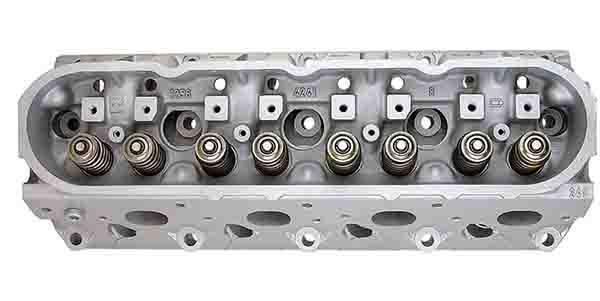 The combinations of pistons, gaskets, camshafts, lifters, cam bearings, head bolts, timing sets and oil pumps are endless. And though the options don’t seem quite as large, quoting a 6.0L GM without a year and VIN is just about as difficult.

If you’re a Customer Service Rep (CSR) for an engine parts supplier, you know the joke: It starts with a call and a request to quote an engine kit for a 5.3L GM. When asked, “What year and VIN number?” The response is all too often, “I don’t know, just pick something. I just need a quick quote.” Nothing will bring laughter any faster than this. At last count I found 33 engine kit listings at one kit warehouse, and a few more are in current development. The combinations of pistons, gaskets, camshafts, lifters, cam bearings, head bolts, timing sets and oil pumps are endless. And though the options don’t seem quite as large, quoting a 6.0L GM without a year and VIN is just about as difficult.

We’re going to approach this as if we already know what liter engine we’re working on. For more I.D. info on that, see our chart:

A reasonably accurate guess-timate might be made if the caller can answer one important question, “Does your 5.3L have Active Fuel Management?” If it has A.F.M., GM’s version of displacement on demand, then we know if has the more expensive deactivating lifters and camshaft. We know it is a Gen IV, has full floating pistons, the bigger, more expensive oil pump, late cam bearings and head bolts. A stab at a quote could be made based on these general facts, but I would not put it in writing.

Of course, if the answer was, “No”, we really don’t know much more than the fact that there are 16 similar roller lifters and a more reasonably priced camshaft. So a stab at a kit for a non-AFM application could be used in general terms, but again, I’m not putting it in writing. The biggest problem here seems to be an inability to understand that things have changed, and it is not just a good idea, but imperative that you ask the questions, if you want accurate quotes, and the right parts.

Times have changed, yes, and now we have a new problem: the used LS engine. Versions of the so called “LS” engines have been around since 1997 when the first 5.7L LS1 hit the market. That means there are thousands of these engines in the wrecking yards just waiting to be swapped into some muscle car or hot rod. But record keeping seems to be as big a problem as asking the right questions, because no one ever seems to know what they’ve got. So to help us all to learn what some of the differences are in a way that will help your CSR to get you the right parts, we’re going to explore the differences from a “Parts Book” perspective. 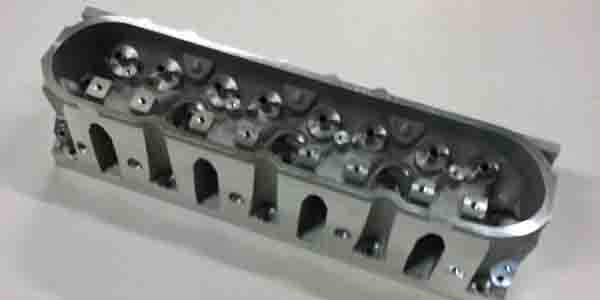 The inevitable question is, “How can I tell?” When you consider that a 4.8L is dimensionally the same as a 7.0L, the potential is there to think you have one engine, when you really have something else. If your engine is fully or mostly assembled, a few things are worth noting from the outside that can help identify which generation motor we’re working with, which means we’re getting closer to finding a year range. So let’s start by looking for sensors.

Being an electronically controlled engine means there are several sensors needed to tell the computer what it needs to know. What you need to know is where these are located. The Gen III small block, or first generation LS, has a cam sensor at the back of the motor and two knock sensors in the valley. Your Gen IV or second series LS has the knock sensors on the sides of the block and a cam sensor in the timing cover. Gen III is considered a 1997-2004, leaving 2005 thru 2014 as Gen IV. For the purposes of this article, we are going to skip any info on the 2015+, Gen V, LT engines.

For the shop, the first exposure to a potential LS job might be a bare block, crankshaft and rods. Look at the rods and see if they have pin bushings. If “yes,” they are from a Gen IV, 2005+ motor. Or, if the crank has a 58-tooth reluctor, again, Gen IV. There are exceptions, but a 24-tooth reluctor most likely means you have a Gen III, 2004 or older. Your exceptions being 6.0L LS2 engines from 2005 Corvettes, 2005-’06 GTOs and 2005-’06 Trailblazer SS. But their full floating rods will lead you back to Gen IV, and you would be correct. Other details will confirm this.

To direct this back to somethings that might affect the shop, or the ability to order parts, lets address two telltales that come up most often – cam bearings and head bolts. There are two cam bore combinations, represented by three cam bearing sets, two of which are interchangeable. Stick a mic or caliper inside the first or last cam bore. The sizes are only .020˝ different, so be accurate with your caliper. At 2.328˝ the Gen III only cam bearing was used from 1997 to early 2003. This can be good news, as there are far fewer combinations for a Gen III and ordering parts gets pretty easy from here.

If you measure the width of the cam bearing, you’ll find the difference. All Gen III and early Gen IV bearings measure .630˝ wide.  Late Gen IV cam bearings may measure .775˝ wide. These sets are usually found in applications with a Cam Phaser (VVT) on the front of the camshaft, and high performance applications. It looks like engineers decided to widen the bearing to carry the heavier load. If you have the wider bearings from the factory, this is a later, 2007-on Gen IV. Emphasis on factory. Installing the wider bearing for all 2.348˝ blocks is getting to be a common practice in the aftermarket becauses these engines are earning a reputation for spinning cam bearings. The wider bearing with more surface contact seems to be a fix for this, especially in an aluminum block.

If you had the narrower bearing, it’s time to drill down. Look at the sensor mounting locations, the connecting rods or the crank. Is this a Gen III with press fit rods? Maybe a 58-tooth reluctor crank Gen IV? 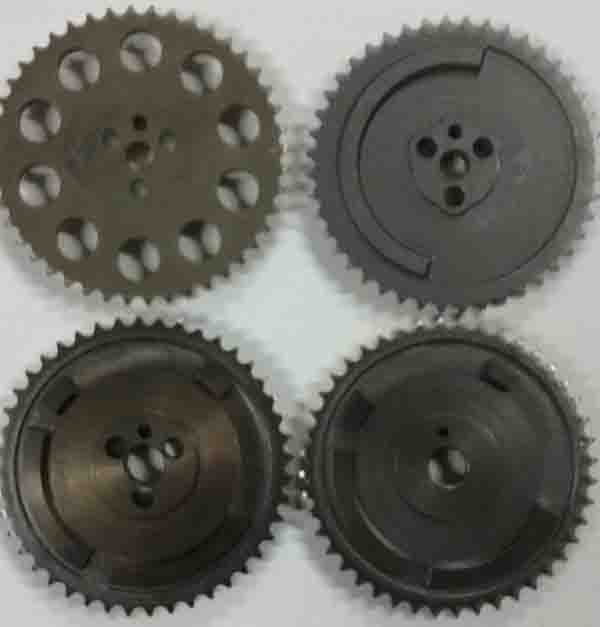 Cam Gears have changed over the years. All Gen III have no sensor lobe, 3-bolts, while Gen IV engines have both 1 and 3 bolt mountings, and 1 or 4 sensor lobes.

I mentioned head bolts – it would be a mistake to think that you can identify your head bolt needs by the cylinder head. The head thickness of all Gen III and Gen IV engines is the same. The changes were made to the cylinder blocks mid-2004. In my dealings with customers who don’t know what they have, I ask if the bolts in the block are all in the same plane, or are some outer bolt holes deeper in the block than the rest. These require three different bolts, (2) 11mm x 155mm, (8) 11mm x 100mm and (5) 8mm x 45mm. This would make this an early 2004 block or older. The other engines, late 2004 Gen III and all Gen IV blocks use just two different bolts to clamp the heads to the block, (10) 11mm x 100mm and (5) 8mm x 45mm per head.

There are a few other differences we still have not addressed, not the least of which is the cam gears. This can actually help you narrow down the the engine year and model, based on what the books say. There are just a few combinations of sensors and either one or three bolts holding the cam sprocket to the camshaft. They breakdown like this:

We started with sensors and have reached the timing gears that trigger some of them. We talked about the differences in cam bores, connecting rods and crank mounted reluctors. There are some differences in cylinder heads as well. The original 1997-’98 LS1 had a valve cover that was attached with perimeter bolts. From 1999 on, all Gen III and Gen IV engines have center bolt valve covers. These 1997-’98 heads have the infamous cathedral style intake ports, as do many of the heads through 2014. In 2005 (Gen IV), a new performance head was introduced. These have a rectangular-shaped intake port and are commonly called L92-style heads. 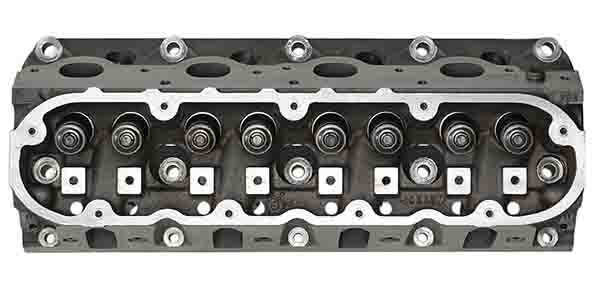 Also new for the Gen IV engines were systems like Active Fuel Management (AFM), and the previously mentioned Variable Valve Timing (VVT), with their Cam Phaser. Add this to a front cam sensor, 58-tooth reluctor, floating pins and a new style head and it can get pretty easy to identify a Gen IV. If you don’t see things like AFM or VVT, don’t assume Gen III, not all Gen IV engines have these systems, or L92 heads.

Another part that changed with the coming of Generation IV is the oil pump. All Gen III motors have your basic pump, but with addition of electric or hydraulic activated systems like AFM and VVT, General Motors engineers increased the volume and pressure of the oil pump, two times. The original pump had a .403˝ thick rotor, producing what would be a standard volume and a standard pressure. The next pump maintained the same pressure, but volumes increased 33% with a .507˝ thick rotor, and the third increased the pressure on this higher volume pump. These are generally used on engines with both AFM and VVT. 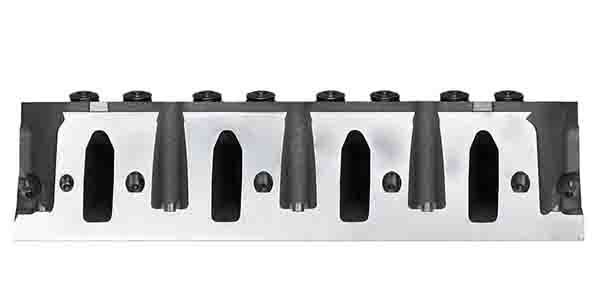 If you’re building a performance engine, or fitting the engine with a carburetor, picking gaskets is pretty easy. Head gasket bores vary, but many of your gaskets are universal. Problems arise when you need complete sets with all the right EGR, fuel injection and other system gaskets. This is where year, model and VIN number matter.

Camshafts could be a problem if you’re trying to build a stock engine. You’ll probably need the same info to I.D. your cam as well. Like a good detective, you could figure out a camshaft by knowing the systems, number of cam gear bolts, generation, type of lifters and some lift measurements taken from the cam lobes, but unless you’re Columbo, this could take some time.

There is more we could go into detail on, but these are the things most engine builders need to know when ordering parts for the popular GM LS-series engines. There will be some who disagree with some details here, but this is what you’ll find in the parts books. Because of the lack of info provided, and an attitude that they are all the same, they may have worked with false or partial info. What is important is that to correctly identify and order replacement parts for these engines takes info, a lot of info. The easiest way is to supply the now normal data – year, model and VIN. But like a good interrogator I can tell you, “We can do this the easy way, or we can do this the hard way.”

Why That 5.3L LS Can Be A Parts Nightmare