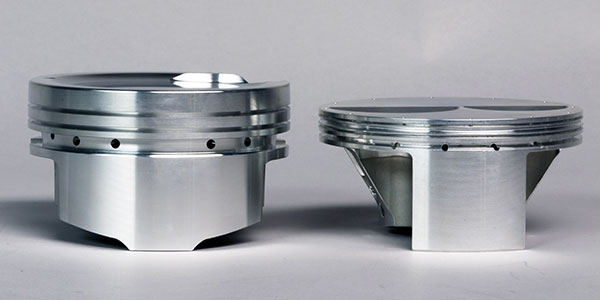 That clearly is an open-ended question because the answer will single out the uber-sophisticated pistons designed for Formula 1 and World Endurance Challenge (WEC), yet to be completely literal the response must acknowledge hand-modified cast factory pistons used in Hobby Stock racing at the local dirt track. 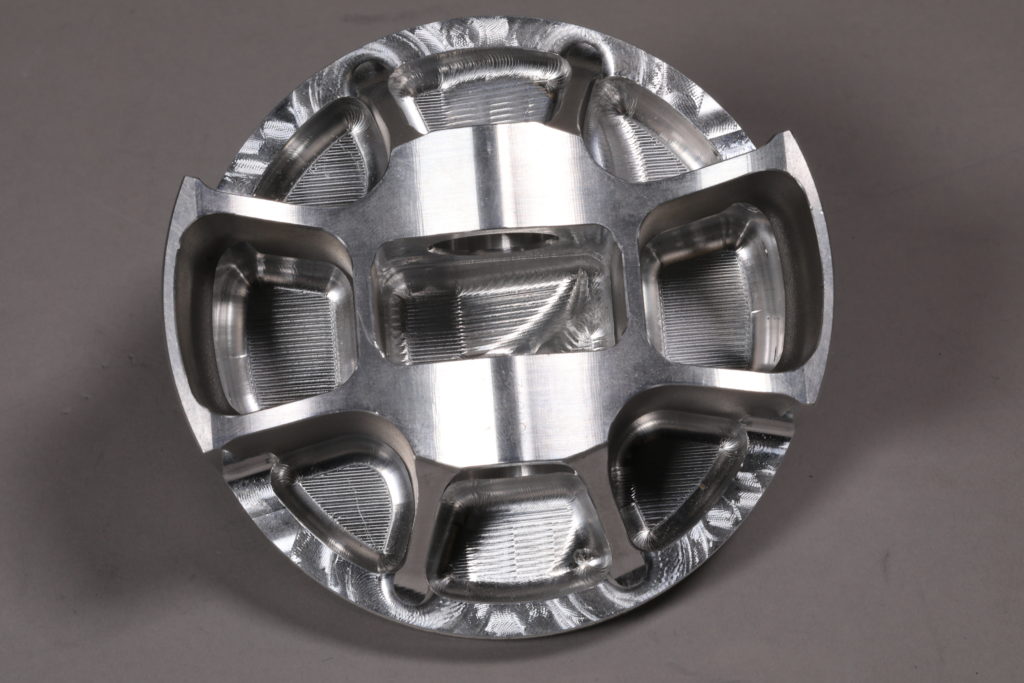 That clearly is an open-ended question because the answer will single out the uber-sophisticated pistons designed for Formula 1 and World Endurance Challenge (WEC), yet to be completely literal the response must acknowledge hand-modified cast factory pistons used in Hobby Stock racing at the local dirt track.

For the sake of argument, let’s define a racing piston as one that works best for any builder assembling an engine for motorsports competition. From there the discussion can move toward more specific talking points.

“Typically [a racing piston] is a highly developed design that has undergone many iterations to optimize its use under a very specific set of conditions,” said Alan Stevenson, senior technical account manager.

A simple comparison of pistons from the muscle car era of the ‘60s to today’s more advanced products will certainly validate that position. Manufacturers have improved materials and designs through advanced computer modeling to improve power and increase fuel efficiency.

To start this bench racing session, consider the basics of aluminum piston construction. Unless there’s a specific rules restriction, a forged piston will always be preferred in racing over a cast. “Forged is the standard, offering excellent design flexibility and the best cost-to-performance ratio,” said Stevenson. “Cast has no flexibility and can therefore not be developed or optimized. Cast pistons are also heavy and brittle, but they’re cheap to produce.” 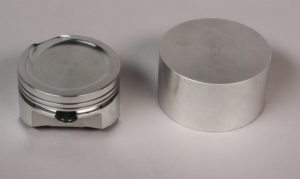 Forged pistons can be made of either a forged blank (right), where the entire shape of the piston is machined out of a billet aluminum cylinder, or created from a net forging that is squished closer to its final shape via a forging die (left).

Low-power engines can survive with cast pistons since they won’t see the abuse of blistering heat or high RPM. There’s not much you can do to improve performance with a cast piston, other than grind out a little metal in the crown to clear the valves if a more aggressive camshaft is installed.

In the ‘80s and ‘90s, hypereutectic became a big buzzword in the piston industry. A hypereutectic piston is one that has greater than 12.5 percent silicon in its metal composition, usually around 16 to 18 percent. A standard cast aluminum piston has around 8-to-10 percent silicone content, which improves the hardness and helps reduce wear around the ring grooves, skirt and pin boss. The hypereutectic piston is still manufactured through casting but the alloy is a little lighter, and due to the improved strength the casting can be machined a little thinner to cut down even more weight.

Still, a forged piston will be much stronger and that’s why it dominates the performance market. There are two aluminum alloys popular with forgings: SAE 4032 and SAE 2618. Here’s where another choice is made that often distinguishes, or at least makes a good argument, for a racing piston—although one alloy isn’t always “better” than the other.

“The term ‘better’ is tricky. If only one alloy were better at achieving every goal, there wouldn’t be multiple offerings,” explains Stevenson. “4032 expands less so it requires less cold clearance which tends to run quieter. This could be important for EFI engines with knock sensors. 4032 is less dense so a given design would be lighter than 2618, however 4032 doesn’t have the high-heat annealing resistance that 2618 does.”

Again, silicon content is the differentiating factor. A 4032 piston has about 11 to 13 percent silicon while 2618 has less than .25 percent. “2618 has higher ultimate strength, better annealing resistance at elevated temperatures and has better ductility. In a racing environment, the goal is often to minimize weight without sacrificing durability in high-heat environments. For these reasons 2618 often gets the nod,” continues Stevenson. 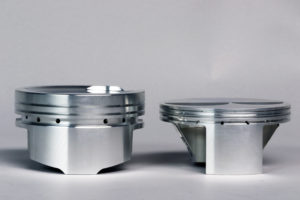 The piston on the right uses a 5/64in ring pack. This is a very common size used during the muscle car ere. The piston on the left uses a much thinner 1.00mm top ring. This reduces friction, freeing up horsepower and allowing the engine to rev quicker.

While a majority of racing pistons are made from 2618 aluminum, there are some exotic materials used in high-end racing—or at least they were tried before being banned. Aluminum beryllium alloy, which is exceptionally light and strong with superior thermal properties, was developed by Mercedes/Ilmor for the McLaren Formula 1 team in the late ‘90s. However, the alloy was quickly banned because beryllium dust is extremely hazardous, and in a fire the element will turn into beryllium oxide, which is extremely toxic.

The latest advanced alloy to draw banishment in motorsports is aluminum metal matrix composite, or MMC. Another very stiff, lightweight alloy, MMC is also banned by Formula 1 but continues to draw interest in other areas of motorsports where the rules are more open.

For many years, top engine builders have preferred billet pistons over forged versions—and probably not for the reason you might think. “Billet is not just a simple option to a forging,” said Stevenson. “Billets are approached as complete engineered solutions that are put through several architecture design iterations using FEA modeling to optimize design to a very specific set of environmental conditions. Most popular configurations are offered as a catalog item, but if a combination comes up that doesn’t match, that’s where a forged custom piston can be designed and manufactured at in just a couple of weeks. This is half our business.”

In other words, billet pistons are primarily used in tight-timeline development projects where critical changes can be made quickly without worrying that a proper forging isn’t available. The debate over billet vs. forged in terms of strength will have protractors and detractors on both sides, but generally speaking, a properly executed forging will have inherent strengths in grain structure that a billet piston will not. “Probably 98 percent of racing formulae have a forged option available in the aftermarket,” confirms Stevenson. 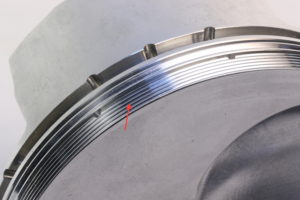 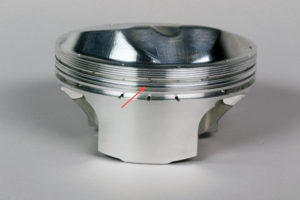 Anti-detonation grooves (arrow) are designed to help reduce pressure spikes while contact reduction grooves (just below the crown) reduce how much of the piston’s crown surface make contact with the cylinder wall.

In addition to improved materials and advanced construction methods, specific features have been developed to boost horsepower through either thermal dynamics, reduced weight or reduced friction. Following are some examples of design elements often unique to racing pistons:

Thinner ring packages
Although some exotic engines run 2-ring packages, the majority of racing applications stick with the tried-and-true 3-ring setups. What has changed dramatically is the thickness of those rings, especially in Pro Stock and other non-endurance engines. “You reduce friction and mass, freeing up power and allowing the engine to accelerate faster. The secret to power in any N/A engine is to use the thinnest rings possible, lapped flat and matched with a super-flat ring groove, and ensure minimal axial and radial clearance,” adds Stevenson.

“Accumulator grooves work on every piston, but work best on gas-ported pistons,” explains Stevenson. “They work according to Boyle’s law; pressure and volume are inversely proportional. Through normal secondary motion (piston rock), the top ring tends to become momentarily unsettled as it rapidly changes direction through TDC. As this occurs near peak firing, combustion pressure tends to make its way past the top ring until it re-settles. Combustion pressure also gets through at the end gap of the ring. Accumulator grooves nearly double the volume below the top ring, reducing pressure according to Boyle’s law and preventing the top ring from becoming pressurized from the underside, which promotes ring flutter.” 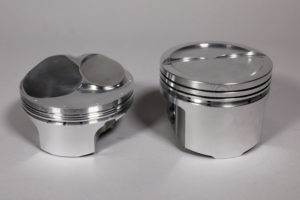 Shortening the piston skirt is a good place to remove mass, but also can be mandatory in stroker applications. Racing pistons can also have different skirt profiles to help them stay stable in the bore at high rpm.

Shorter Skirts
Again, more design changes to reduce weight and friction but these efforts are usually dictated and restricted by the engine architecture, such as length of the cylinder sleeves and the stroke. “The gauge point of the piston skirt must remain captured in the bore at BDC,” said Stevenson.

Thermal Coatings
Some engine builders want to reflect the heat away from the piston, preferring that the valves and cylinder head dissipate the heat to the coolant instead of the pistons and rings through the cylinder wall. Thermal coatings are designed to repel heat from the piston crown, and in some cases the combustion chamber as best as possible.

Skirt Coating
“By far the most friction in an engine is from the rings. A distant second are the bearings. Skirts have minimal friction since they ride on an oil film,” says Stevenson. On racing pistons, top teams use coatings as an insurance policy against overheating. In OEM and daily driver conditions, they are used to protect against dry starts and other situations where oil on the cylinder wall is limited. 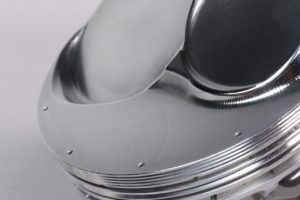 This piston features vertical gas porting which allows combustion pressure to get behind the piston ring, forcing it into the cylinder wall and increasing ring seal. It is most commonly used in drag racing applications.

Application Specific Modifications
“Some modifications are inappropriate for one type of racing while done routinely on pistons made for other types of racing,” cautions Stevenson. “Some examples are spinning the bosses, plunging the bosses, drilling holes in the skirts or struts, and 3D under-crown milling.”
3D profiling is a precise milling procedure where the piston crown maintains the same thickness regardless of the dome profile. This step ensures that the crown has the necessary strength and heat resistance for competition with the least amount of weight. “This is especially important when trying to maximize compression ratio, and it can also be used around valve reliefs to promote smoother flame travel,” adds Stevenson.

The actual crown design and valve relief dimensions will be dictated by the combustion chamber and valve geometry. Another racing piston cue is that the engine builder will send a mold of the combustion chamber to the piston manufacturer so that the dome design exactly follows the profile of the chamber.
Finally, some engine builders call for very slight adjustments in the overall piston shape and dimensions to suit their needs.

“Skirt cam/barrel shapes and ring-land diameters are part of the black art of optimizing a design during a development program,” says Stevenson.
As you can see, a racing piston may have one or many of the features and modifications mentioned. The key is designing a piston that meets the needs of the engine builder assembling an engine for a specific competition.

This article was sponsored by Wiseco.  For more information, please visit our website at wiseco.com

Sponsored Content: Installing Connecting Rod Fasteners—Tips And Tricks To Get It Right

What Makes a Racing Piston?