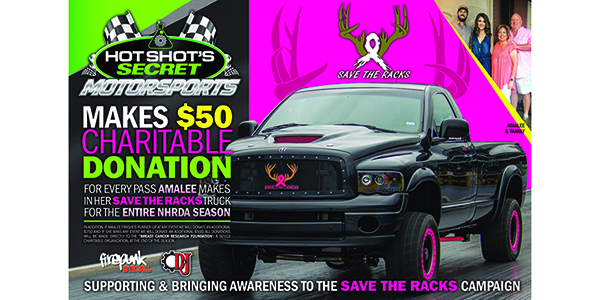 Beginning with the March 16th season opener of the NHRDA Hot Shot’s Secret Diesel Drag Racing Series in Chandler, AZ, Hot Shot’s Secret will support Save the Racks by donating $50 for every pass made during the drag racing series, and will provide a $250 bonus for a second place finish or a $500 bonus if Amalee Mueller wins the class.

Hot Shot’s Secret, a manufacturer of performance enhancing fuel and oil additives, has announced it will be partnering with NHRDA racer and pro puller, Amalee Mueller to “Save the Racks.” Mueller is the 2017 Pro Stock Champion in the NHRDA Sled Pulling Series. Her mother was diagnosed with breast cancer eight years ago. In response, Mueller branded her Dodge Cummins-powered pull and race trucks with Save the Racks to raise awareness and support her mother’s fight against breast cancer.

Beginning with the March 16th season opener of the NHRDA Hot Shot’s Secret Diesel Drag Racing Series in Chandler, AZ, Hot Shot’s Secret will support Save the Racks by donating $50 for every pass made during the drag racing series, and will provide a $250 bonus for a 2nd place finish or a $500 bonus if Amalee wins the class. Starting the season, Amalee won the 10.90 index class, racking up a donation total of $850 from Hot Shot’s Secret.

In addition, Hot Shot’s Secret will also make donations following the same schedule for all passes ran by Amalee’s father, Edgar Artecona, to support this worthy cause. All funds collected throughout the season will be donated to the Breast Cancer Research Foundation in October during the NHRDA World Finals, which coincides with Breast Cancer Awareness month. Save the Racks tee shirts will be sold at the races in the Hot Shot’s Secret booth with 50% of the purchase price to be added to the donation as well.

This year, Mueller is unveiling a new “Save the Racks” wrapped Pro Stock truck built by Lavon Miller and the Firepunk Diesel team, D&J Precision and fueled by Exergy Performance, that will be unveiled at the Oklahoma Diesel Nationals in Tulsa, OK on May 18 and 19.

Amalee Mueller says, “I’m very thankful that Hot Shot’s Secret captured my vision to bring awareness to breast cancer, and are supporting the cause by their generous donations. They dove into this wholeheartedly with me, and I am very excited for this upcoming season!”

Hot Shot’s Secret Director of Marketing, Kyle Fischer, says, “We have a great deal of respect for Amalee, her drive and dedication to excel in drag racing and sled pulling, and especially her efforts to support breast cancer awareness. Breast cancer affects many families and it is through efforts like Amalee’s that we will eventually be able to fund a cure. We encourage other companies that may want to get on board to support the cause by donating funds for each pass made by her and her Dad’s truck this year.”