Have you noticed your allergies are acting up? Are the birds chirping a bit louder? Is it getting warmer and greener? Good, it’s not just me. Spring has sprung in the Northern hemisphere and that means people are going to be getting out their lawn and landscape tools – lawn mowers, trimmers, chainsaws, leaf blowers, etc.

These devices run using engines that, despite what some people may believe, need regular maintenance just like an automotive engine does. Recently, we spoke with a couple of small engine repair shop owners about the lawn and landscape market, small engine maintenance and some common misconceptions about these engines’ needs. 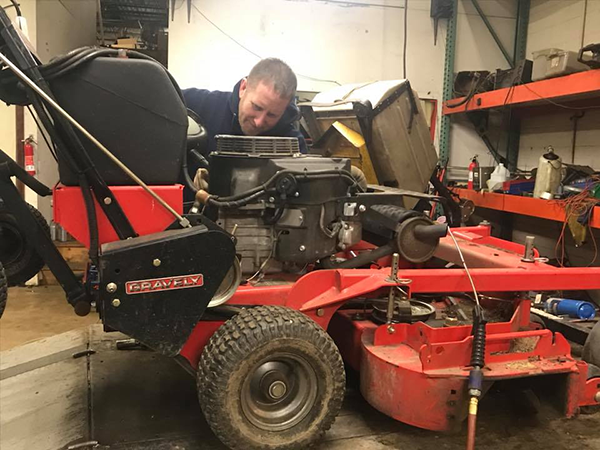 While it may have been beneficial to rebuild some of these engines a number of years ago, that simply isn’t the case these days. Outside of some routine maintenance work, if a customer’s small engine is in such disarray that it would require a rebuild, he or she might be better off buying a new engine or piece of equipment.

“The way this industry is now, to rebuild an engine is just not cost effective,” says Brian Clowser, owner of Prospect Small Engine LLC in Mount Airy, MD (www.prospectsmallenginellc.com). “The biggest problem I see is that a lawn mower isn’t worth as much as your car, so people don’t want to put as much money into their lawn mower as they do their car.”

Clowser says that he’ll see the rare short block rebuild or a ring job, but by the time you add labor and parts it’s more cost effective to sell a new engine. 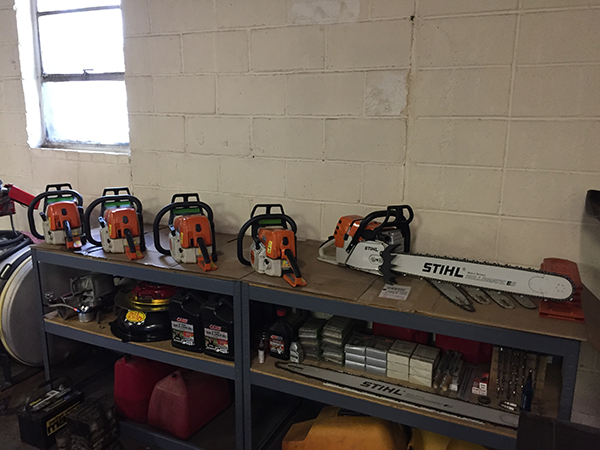 “We do very few rebuilds nowadays,” he says. “It doesn’t make sense to rebuild one, unless it’s a real oddball engine that’s no longer available. Then we’ll rebuild it. But very seldom do we do rebuilds – probably less than half a dozen a year at this point. Twenty years ago, we used to install short blocks on a weekly basis and that’s just gone. The short block prices have gone up so high that it’s not feasible anymore. Repair work is most of the stuff we are doing.”

“Probably 80 percent of our work now is carburetor-related due to the ethanol in the gasoline,” Norton says. “Ethanol in cars is not a huge, huge deal because they’re constantly moving and constantly going through the gas, where small engines you put them away for the season with gas in them and then you come back six months later and it doesn’t run.”

Another thing Norton says small engine shops don’t do anymore is rebuild carburetors. Today, most of the time carburetors are just replaced.

“Again, it’s the money factor – you can buy a carburetor for $50 or you can buy a kit for $30 and pay the labor to rebuild,” he says. “You’re better off just putting a new carburetor on it and being done with it.”

According to Clowser, 99.9 percent of the snow blowers that come into his shop are for carburetion repair due to ethanol. He also said that head gasket repair is a big item in his shop.

“With ethanol, everything runs so much hotter now with emissions and so you see a lot more head gasket jobs and stuff like that,” Clowser says. “Since they started putting everything through emissions, basically what most of these companies did is just leaned everything out. With an air-cooled engine, when you lean it out, you run it twice as hot. So now your oils and your oil change maintenance is getting a lot more important. You get an oil leak and then oil and dirt build up on the engine block and then it runs even hotter and then you blow head gaskets or stuff like that.”

The landscape industry, though very different from automotive, is still somewhat similar in terms of oils and emissions.

“That’s why a lot of manufacturers like Kohler and Kawasaki are coming out with their own oils because they took the zinc out of oil for emissions and zinc was one of the components that all these small engines count on for lubrication,” he says.

Outside of that type of work, both Norton and Clowser see a lot of regular maintenance work.

In the small engine market, there are definite busy and slow times of the year, and much of it depends on Mother Nature.

“Springtime is definitely our most active period,” Clowser says. “If we get snow, winter is very busy. As winter is coming to a close it’s our slowest time of year. We’ll pick up in March and get really busy. We’re kind of like farmers, because we count on rain and the weather. Weather affects our business big time. If people aren’t cutting grass or using these small machines, they’re not breaking stuff.”

Norton echoed these remarks regarding the seasonal attributes of the market by saying he has to be ready for both the slow times and busy times.

“If we have a period with no snow, we could be dead for three weeks,” Norton says. “But if we were to get blasted with a foot of snow, we would probably be booked a week out within a day. If it doesn’t rain, then grass doesn’t grow and mowers don’t break. Spring and fall are the busiest times of the year. When that transition comes into effect and you get that very first 70-degree day on a Sunday, people have nothing to do, so they start pulling stuff out of the shed and trying to start their equipment – that very next Monday we’re swamped and every single one of them says, ‘It ran great in the fall and now it won’t start.’”

According to Norton, the biggest culprits of no-starts are stale gas and mice.

“Mice have been a huge issue this year,” he says. “I was told that they’re putting soy in the plastic for the installation on these wires and that’s why the mice are going after the wires so badly recently. That’s never been a big issue, but in the last two or three years we’ve seen it a ton.”

Recently, soy has been used in bioplastic insulation for automotive engines and it has been a big problem for newer car owners because rodents get to it – now it seems small engines are experiencing a similar issue. There are plenty of remedies a simple Google search will uncover.

Despite the fact that fewer and fewer rebuilds are happening in the market, the maintenance side of the small engine market has remained strong, which is a great thing for shop owners like Clowser and Norton. The snow will keep falling and grass will keep growing.

“The market has been pretty good lately,” Clowser says. “It’s been staying steady. When the economy’s bad, people want to fix stuff – they don’t want to replace it. So the past few years have been pretty good.”

The market may be in good shape, but according to Norton, the small engine market is aging and not many younger people are waiting to fill those gaps. 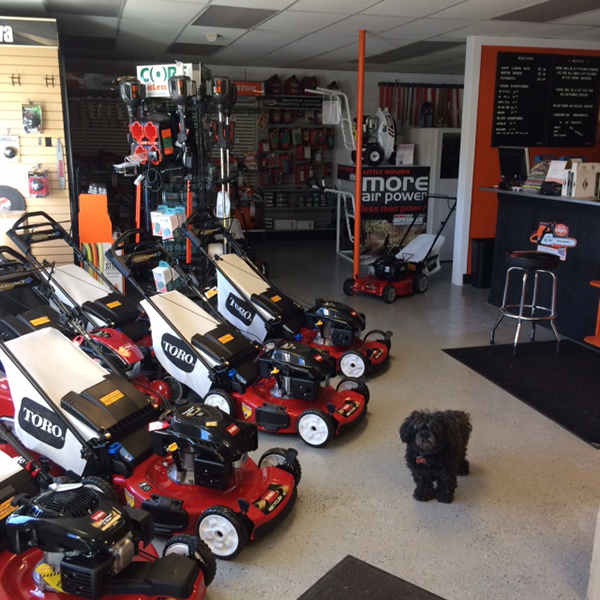 “You’ll start to see shops decline pretty aggressively, probably in the next five years,” Norton says. “I go to training schools every year – eight to 10 different schools a year and the sales schools. Today, 55 percent of the average business owners in small engine repair shops are over 60 years old and there’s nobody learning the trade, so there’s nobody there to take over for these guys who are going to be retiring soon. So many of them are  probably just going to close up shop.

Clowser also points out that the skillset needed for this market just isn’t being learned by many people.

“It’s very hard to find qualified technicians,” Clowser says. “Anybody who is a halfway decent mechanic wants to go work on cars.”

While the median age of shop owners in the market is going up and good help continues to be hard to find, the technology on these engines is actually getting newer and may require advanced training in the not too distant future.

“You can’t hook a computer to the small engines, yet,” Clowser says. “But it’s going that way. Manufacturers are starting to go toward fuel injection because of emissions regulations, so we’ll soon be able to hook up a laptop to them to start to diagnose them.”

The industry may be somewhat parallel to the automotive field, but from a mechanical standpoint, the two are hard to compare.

“It comes down to just learning how this stuff is built. We don’t have replaceable bearings and stuff like that like an automotive engine does. Most of them have bearings that are built into the block. It’s just two different worlds. That’s the only way to explain it.”

Because there isn’t a lot of crossover between automotive and small engine repair, it isn’t common to see a shop that works on both automotive engines and lawn and landscape equipment.

“When you get guys who are automotive mechanics, they turn into part replacers,” Clowser says. “They can make an engine work so that it gets back out into the field, but fixing it right doesn’t always end up being what happens.”

And when your busy season is right around the corner, you want employees with the know how to do the job right.

“Now that spring is on the doorstep, everyone’s getting their stuff ready to run,” Clowser says.

Time to get busy!

The record-high sales growth over the past two years for the automotive specialty-equipment industry is beginning to level off or subside, according to the newest SEMA market research report. Despite ongoing economic uncertainty, supply-chain issues, and rising costs, companies remain optimistic as sales remain solid and above pre-pandemic levels. Related Articles – Edelbrock’s Smitty Smith