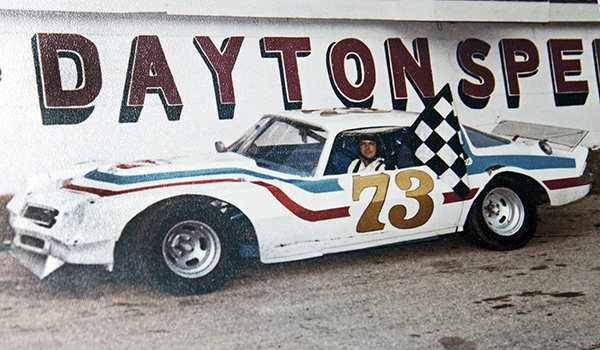 It isn’t often that successful performance on the track and effective engine building skills come from the same individual. But for Ohio resident and Daytonian Bobby Jacks who, after many decades of experience, has proven that one can have considerable talent in both.

Jacks ran in big-time stock car racing, mostly on pavement with ARCA, ASA, USAC and NASCAR where he finished with two top-10s. Also during his 14-year career, he had six wins in ARCA with a multitude of podium finishes along with six quick times. He had five top-10 finishes between 1981 and 1986, with his best effort being fifth in 1982. And he spent considerable effort on local racing in the western Ohio area throughout his career. He admitted that his stock car racing would definitely have to qualify as “low budget” – but definitely high profile.

Jacks recalled that his string of success was too much for one particular track owner. “The owner told me that I would have to move up a class at his track because I was winning too much. There were also lots of t

rack championships at those local tracks, but not much money to be made.”

Bobby had a unique corporate connection in the late-1980s when he was involved with Oldsmobile through a local dealership. He worked with body parts for the stock car version. “The Olds guys came to my shop and we had discussions on the set-up, which used only on the Delta 88 and Cutlass models in ARCA racing rued the 1987 season. During qualifications at both Talladega and Daytona, I ran over 198 mph along with getting up to 205 mph in the draft at both the Talladega and Daytona races.

Up until the early 1980s, Bobby built the engines for his own stock cars. He also indicated, “During my ARCA years, I was pretty much the whole deal. That included building my own cars, along with getting behind the wheel.”

He also recalled an old 350 Chevy NASCAR race engine that he modified and qualified at 190 mph for the Daytona ARCA race.

But there is one other stock car talent this guy possesses – being a great welder. He can fabricate many stock car parts, including bodies, a skill that actually saved his life. He says he recalls a vicious incident in a 1979 ARCA race when he got tangled up in a multi-car crash at 185 mph. “I remember hitting on the A-pillar and making seven complete rolls. The crash was carried as a highlight on the Wide World of Sports.”

But he was also a skilled road racer, quite rare for an oval track racer of the time. During the 1980s and 1990s, he competed with the SCCA in sports car racing.

He started with a 1988 Toyota MR2 and finished third in class. Next, he drove a Firebird in six-hour races at Watkins Glen and St. Louis. In the late-1990s, he fielded an SCCA Showroom Stock ’93 Camaro and finished first in class. Next came a 1978 Camaro, which he ran at Mid-Ohio and was leading late in the race when a blown hose took away the victory. He maintained the American powerplants for those cars.

His final road racing effort included racing a 944 Turbo Porsche in the Grand Touring Class. In the four races he ran, there were two second-place finishes, a third and a fourth.

Engine building came early for Bobby, actually starting when he was only 14 years old. “I still remember when I built my first engine. It was a Chevy 216 cubic inch straight six from a ’39 Chevy. I put in a hotter cam and three carburetors and thought that was pretty cool.” And to this day, Bobby has remained a Chevy guy, through and through. “Heck, everybody uses them,” he said. When pressed to discuss his favorite Bowie engine, he quickly indicated that it would be the 350 family for the simple reason that a huge amount of aftermarket parts are available that can be used in making stout racing engines.

Then he started his present engine building business at his home north of Dayton. “That first location was pretty shaky at first – I only had a few customers and held down a regular job with Emory Air Freight. “The job was keeping the ground support engines running,” he recalled. They certainly had the right guy for that job!

Since then, he has had two other locations with more of a race shop environment. His second location, which lasted from the 1980s until 2009, is where he is located today.

He indicated that he coordinates closely with the customers,  about 95 percent of whom are race-oriented, which in Bobby’s world includes drag racing and circle track applications. “I want to know the exact race application where the engine will be used, which for oval track racing means whether it’s dirt or pavement, size of tracks to be run, and the type and weight of the racecar. I usually have a compression ratio in mind to meet the customer’s requirements. But that pretty much depends on how much he wants to spend.”

He indicated that a new engine build usually starts with the purchase of a block and the required components, and then he performs his magic. He recognizes the trend away from the old small block Chevy engines and toward the modern LS powerplants, which have a lot more horsepower, along with being considerably stronger.

Once completed, Bobby tests the engine on the test stand, running the engine through the basic set-ups to break in the engine at the low rpm range and determine the valve settings. “If there is money in the budget for dyno testing, I highly recommend that it be done to assure that everything was done correctly on the engine.”

Bobby says he also does a lot of work for the Saturday night drag racer. “That would require an engine capable of coming off the line at 5,000-6,000 rpm and getting lots of torque.

“I look at parts like the cam and heads to get that desired performance.” And on occasion he will modify it for street performance.

“As far as the cams, I look for more duration and lift,” Jacks says. “Also, with the cylinder heads, I word hard to increase the air flow of the heads with porting required. I would definitely use aluminum heads for the drag application along with the obvious weight saving. I also think that the aluminum head design is more adaptable to drag.”

Like many engine builders, Bobby Jacks has a preference for the brand of aftermarket parts and pieces he likes to use in a race engine build-up. He explains that while he prefers certain brands over others, the customer makes the final decision – but the ultimate priority in any engine build project is durability. “To me, that can often be accomplished to some degree by achieving a certain horsepower at a lower rpm,” he explained.

“I strive for maximum torque in all my engines. The horsepower will come along with it. There is a sweet point where horsepower and torque match. At that point, there is a chance that horsepower can be achieved at a lower rpm. One point must be remembered: there is no substitute for cubic inches.”

One engine-building activity that intrigues Jacks is his recent involvement with antique automotive engines. He looks upon it as an effort that stretches his capabilities. “Some of these engines are very old and there are no original parts around or any data on them. So it comes down to the point that I have to fabricate some of them myself. And that’s not an easy task.”

He also indicated that he studies any books that have any data on the old powerplants.

A current engine that he is working on is a 1926 Peerless inline eight-cylinder model.

“When you are working on an engine this old, you often have to add some modern parts. With this engine, I used modern aftermarket pistons. Normally, you can make the original crank work. With the heads, you have to work with what you’ve got. When you have to bore out the block, you take off as little as possible.”

With what he has learned in this field with these aged powerplants, Jacks might be just the guy to visit if such a challenge comes your way.

Asked what he thinks about the future of one-or-two man engine building operations, the veteran says, “You know, when you first asked me my thoughts on that subject, I initially thought that maybe I might be a dying breed. But you know, here in Dayton we have a number of engine builders and many fall into the same small manpower situation as mine. It seems that we all have our own little niche!

“If I had to do it over I would try to be more proficient in mathematics, which is such an important aspect of modern engine building.”