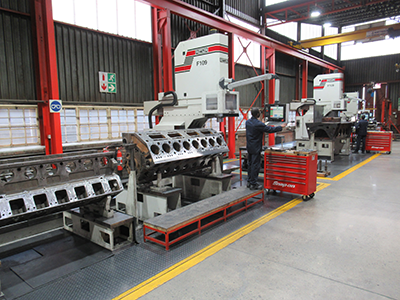 Ask the typical reader of Engine Builder what his biggest business challenge is and you might hear complaints such as bargain basement internet parts sales, competition from OEMs and an inability to find enthusiastic employees. Ask Andrew Yorke about his headaches and things sound a bit different.

“Things that all my fellow engineers take for granted in the States – such as dependable electricity or a guaranteed water supply, aren’t really guaranteed here,” says the Operations Director of Metric Automotive Engineering in Johannesburg, South Africa. “Here, you just accept that when you open your shop on Monday morning those are things that may or may not be present – it is challenging to provide what we believe is first-world service and quality in a third-world environment.” 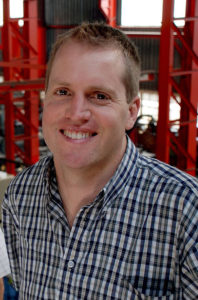 For more than 49 years, Metric has navigated these challenges, in sub-Saharan Africa. Customers – who hail from the entire continent – are predominately heavy-duty diesel in nature.

Yorke says it’s normal to have Cummins, Caterpillar, MTU, Komatsu, Volvo and Iveco as well as many other brandsof diesel engines in the shop at the same time, many of the jobs coming directly from the OEM.

Unlike many of his counterparts in the States, Yorke says these OEM diesel manufacturers aren’t his competition – they’re his customers. “OEM dealers in the States can afford to put in their own machine shops – here they just don’t have the engine populations to warrant their own shops. Generally OEMs like Cummins,Caterpillar, MTU and Komatsu and the like wouldn’t be all in the same shop.

“In essence, they’re sending us business not just because they don’t have the volumes to justify their own machine shop, but because operating a remanufacturing facility that produces components that meet or exceed OEM specification is an extremely challenging and difficult way to earn a living in Africa,” Yorke says.

Despite its name, Metric Automotive Engineering doesn’t cater to the traditional engine crowd. “We prefer not to touch any gasoline engines – it’s not a market we play in. We’ve grown our business into v 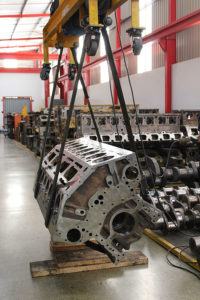 ery much a niche market specializing in mid- to high-horsepower and large, heavy diesel. We’re happy with a

nything from four liters of diesel up to the big locomotive, power generation and marine engines. We are currently seeing tremendous growth in our large natural gas engine customer base.”

Diesel and natural gas componentremanufacturing makes sense, says Yorke, because in Africa, gasoline doesn’t. “The gasoline engine market in South Africa is cutthroat. It’s not based on quality – it’s based on cheapest price.”

The number of quality, registered engine builders in South Africa is extremely low, says Yorke. “However, the number of informal operations operating out of backyards and one room shops has increased dramatically. Their focus is on patch repairs, done as cheaply as possible to just keep the vehicle running,” he explains. “This ‘cheapest price-based’ model is not sustainable business model if you want to be able to produce quality remanufactured components, maintain existing equipment and invest in new technologies. I wouldn’t want to be in it,” he says.

In 1999, Metric Automotive Engineering was named our Machine Shop of the Year, and at that time was just learning what the evolving South African economy would mean to its business. Since then Yorke and his team have excelled at being an international engine building force in an international economy that continues to be a challenge.

Before the turn of the last century, Metric handled an average of 30-40 engines per month. Since that time, Yorke says things have changed. “Our business has shifted dramatically away from complete engines to component remanufacturing almost entirely. The component remanufacturing includes blocks, crankshafts, camshafts, connecting rods, gear train and cylinder heads. We do still build engines for select customers and those rebuilds range from small four cylinder Perkins engines through to the Caterpillar 3500 series engines,” he says.

“On the mid-range diesel side, we do have local competition, but it’s such a small market that we all know each other,” he continues. “On the larger diesel and natural gas engines we are fortunate to find ourselves in a very niche market that has very few competitors on the continent. “

Andrew is the third generation Yorke to manage Metric, following in the footsteps of his father, Darryl and his grandfather Lindsay. Formed in 1969 at a particularly bad time in South Africa’s economic history, there was no reason to have a rosy outlook. “When my father opened the business the general economic structure was in shambles,” Andrew’s father Darryl told us in 1999. “The economy had overheated, the stock exchange had just collapsed, the bottom dropped out of the real estate market and mostpeople had little money to spend on anything.” Luckily, the ever-optimistic Darryl realized that those conditions could be advantageous to his business and the next generation has continued pushing forward.

“Very often there’s damage to cylinder blocks that, were they seen in the States or Europe, shops would probably just scrap the block and put a new one,” says Andrew Yorke today.  “Given our exchange rate and all the other challenges here, we’ve had to develop a lot of processes to remanufacture and salvage cylinder blocks in order to allow customers to be able to use them; otherwise the cost of rebuilding that engine just gets exorbitant.”

Business management excellence is critical for Metric’s success, says Yorke. “ISO9001 – 2015 is the backbone of business. It drives the quality of our entire operation, from a simple light bulb change to a request for a new machine. The system keeps us on top of our workshop floor’s specification needs and helps identify sections or individuals that require attention. It also ensures you close the loops with the customer on any rework/warranty claims, which we find very beneficial tomaintain good customer relations.”

Investment in the business’ infrastructure has allowed Metric to compete in a way many competitors can only dream of. “We’ve been able to build on the relationships with our equipment suppliers and develop a range of salvage processes that offer some unique opportunities to customers who have been able to salvage components that otherwise would have been scrapped,” Yorke says. 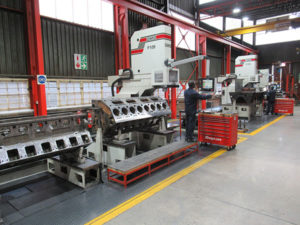 “I think that’s where Metric has differentiated ourselves from our competition – it’s our continued investment into new machines,” says Andrew Yorke.

To meet thedemands of its diesel OEM customers, Metric had the very first AMC 2800 and Rottler F88 machines in Africa in 1999 and the company’s equipment investment has not slowed down.

In addition to the machining production, Metric has a subsidiary company called

Reef Fuel Injection Services. “With our Bosch, Delphi, Denso and Stanadyne appointments, Reef Fuel Injection (RFI) is very much part of our service offering to our customers,” says Yorke. “Fuel injection technology has been advancing year on year and through continued investment in diagnostic, rebuild and calibration equipment and tooling, RFI has become a market leader in South Africa. RFI is also known for its advanced Caterpillar injector diagnostic and repair programs, with the Caterpillar dealership for southern Africa making use of its services.”

Today, Metric Automotive Engineering’s staff of 70 (including the RFI team) utilizes a full complement of heavy-duty machines including:

In addition to the machining equipment, Yorke says Metric currently utilizes three dynos, Currently one Schenk and two Froude systems. “However we have a new dyno premises built, with the intention of putting in two completely new dynos systems, covering 100 to 4500 bHp,” he says. 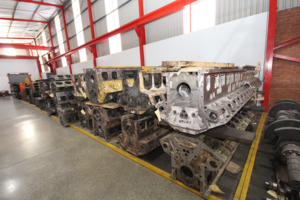 For Metric, “international” doesn’t only mean within the continent of Africa. Yorke says his relationships with his equipment suppliers in the States are tested by time zones. “We have a very faithful and dedicated distributor down here in South Africa, named Dave Fletcher,” he explains. “And thanks to technology, the nine-hour time difference for us and the factory really isn’t an issue. They have the capability to log into our machines remotely and do software upgrades and change parameters if they need to. With a nine-hour time difference, updates can happen overnight. They can just leave a Skype message to tell us what they’ve done. Without that we’d be in deep trouble.”

This wealth of equipment allows Metric to produce unmatched quality for engines that receive unmatched torture. The diesel engines on the continent of Africa are pushed to and beyond their limits, and Yorke explains that the climate, poor fuel quality and general lack of service and maintenance stress and wear the engines to a greater degree than they would be here in the States.

But Yorke says differences between his business and that of counterparts here in the U.S. extend beyond the size of the potential market.

“In Africa time really has no meaning. I think of some of the machine shops that we know in the States – if they had to sit and store components on their shop floor awaiting the go ahead after they had quoted the customer as long as we do they’d be out of business. But it’s just part of doing business in Africa,” Yorke explains. ”The decision-making process on these big engines that come with such a hefty price tag is often a very slow and tedious one.”

Yorke says delays are part of doing business. “Although we can turn something around very quickly from an engineering point of view, decisions made by the end user as to how they’re actually going to repair that engine or whether they’re going to roll it into next quarter’s budget, that’s where much of the delay is. Yes, it can be a tedious thing getting engines shipped down here to South Africa and then getting them shipped back up to their owners, but far more time is wasted in the decision making process about whether those owners can afford to do the repair or not.”

Yorke says although his overall cost of doing business is probably more expensive than a comparable business based in the States, Europe or Australia his labor cost are dramaitically lower.

“We have a very high unemployment rate of about 26%, which means there is no shortage of people looking for a job,” says Yorke. “So, filling unskilled positions like cleaners, general workers and the like is fairly easy.”

However, he faces similar challenges to his global counteparts. “I do think it’s a global problem – for a person to be good at what he does and hence happy in his job, the person needs to be passionate about what he is doing. Finding potential employees with a passion for what we do is the real challenge. Metric currently has five apprentices in training including our first two female apprentices. “

Back in 1999, Yorke says, there were about 500 engine rebuilders in South Africa, 12 of which were really considered Metric’s competition. Today, Yorke says the picture outside his doors is even bleaker.

“Our industry is slowly dying,” he says. “There’s very little reinvestment into. I mean there’s a pool of used secondhand machines. Some guy gets the idea that he should start his own shop, he takes out a bank loan and six months later it’s all repossessed. The equipment goes back into the pool and someone else has another try.  Every time that happens, they’re just buying a machine that hasn’t been looked after, hasn’t been maintained and can’t be accurate. It’s a kind of downward spiral. And I think that’s where Metric has differentiated ourselves from our competition – it’s our continued investment into new machines.”