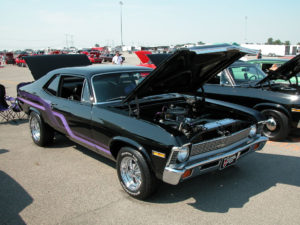 Keeping your Genuine GM complete may be the dominant factor in some customers’ decisions about their rear differential. The 12-bolt will definitely do that.

What is the goal for performance when it comes to the automobile? The object is to take all of the components of the automobile and improve upon them for power and durability. Most of the time this pertains to the engine, transmission and rear differential. However, the rear differential is the most frequently overlooked component because no one really understands the level of abuse that it must endure.

For the most part, if a rear differential is going to have or pose a problem, it can be easily replaced by a 9-inch Ford. But, what if you do not want to see your “all-true” GM vehicle riding on a Ford differential? For some GM owners, the thought of a Ford part on their car is blasphemy.

The Ford 9-inch is the easy way to go and most aftermarket manufacturers will produce one for most makes and models of cars (see Engine Builder’s January issue, page 36). But for those of you who are loyal to GM, the GM 12-bolt may be a better option. 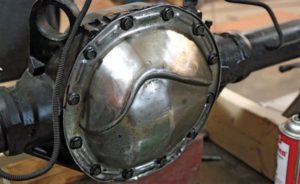 The GM 12-bolt is one of the strongest rear differentials that GM produced, which can be a great addition to any performance project.

The only problem is that the 12-bolt was not as heavily produced as the 9-inch Ford. The 12-bolt was made from 1964 until 1972 and was designed to be durable enough to withstand the torque of the big block engine. GM did produce another rear differential known as the 10-bolt through the ’70s, ’80s and ’90s but it was not as tough as the 12-bolt. Most GM vehicles with a 10-bolt rear differential were outfitted with a 7.5˝ or 8.2˝ ring gear that could only take about 400 horsepower.

If you want to upgrade the rear differential in a customer’s GM car without the 9-inch Ford as an option, then try to sort out a 12-bolt. When you compare the components you’ll find that they are very similar to each other. Now don’t get me wrong, the 12-bolt does have some weak links and the Ford 9-inch is a very strong piece, but if the object is trying to keep that GM all GM it’s your best option. 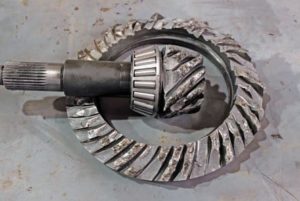 The GM 12-Bolt’s pinion location may naturally cause problems, says Engine Builder contributor Randy Rundle. Make sure the compnents you use are in solid shape.

The 12-bolt came from the factory with 30 spline axles, which is good for performance applications. The major downfall was the axles are held in place by C-clips. The axle slides in the axle tube through the bearings and is held in place by a C-clip – this pushes on the side gears and is held in place by the cross shaft pin for the spider gears in the carrier. This doesn’t necessarily pose any problems unless you break an axle. Since there is nothing to hold the axle in at the axle bearing it will come out with the wheel and tire attached. There is a conversion kit available in the aftermarket which allows the axles to be bolted in at the axle bearings and eliminate the use of the C-clips.

The 12-bolt isn’t so much difficult but more frustrating to set up. For the most part, the pinion depth will be most challenging because if there is a shim thickness change, then the bearing has to be pressed off then back on for the set up. There are “special” bearings offered by several aftermarket manufacturers that are .001˝ to .0015˝ bigger on the inside of the pinion bearing diameter that allow the bearing to be removed by hand for ease of the set up. Once the correct shim is determined then the “original” bearing can be pressed in place for the final assembly.

Once the proper pinion depth is achieved, there can be some aggravation in setting up the backlash on the carrier bearings. With a 12-bolt, the backlash is set by adding or removing shims between the rear end case and carrier bearing. Trying to achieve the proper backlash for the ring and pinion set may take several attempts using different thicknesses of shims. The carrier may have to be removed several times in order to collect the proper amount of shims to reach the desired thickness to have correct backlash on the gear set. 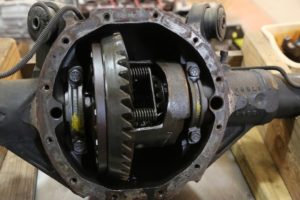 The GM 12-bolt carrier is accessed by removing the rear differential cover because the rear end housing is the carrier case.

There were also three different styles of yokes used for the driveshaft, known as 1310, 1330 and 1350. These different yokes dictate the difference in the universal joint that will be needed. For most passenger cars the most common yoke was the 1310, which uses a U-joint that is 3.219˝ wide with a cap diameter of 1.062˝. The 1330 was a small upgrade to the 1310 with about 1/2˝ more width. The 1330 measures 3.622˝ wide and still uses the same cap diameter of 1.062˝. The type 1350 yoke was used in truck and high performance applications and had the same 3.622˝ width of the 1330, but the cap diameter increased to 1.188˝ in diameter. Since the 1310 was the most popular, most aftermarket manufacturers of performance upgrades will recommend that you step up to the 1330 size yoke for some added insurance.

The GM 12-bolt is one of the strongest rear differentials that GM produced, which can be a great addition to any performance project. However, if you notice the difference where the pinion location is between the 12-bolt compared to the 9-inch Ford, you will see that the pinion shaft in the Ford is rather offset and lower in the case whereas the 12-bolt’s pinion is mounted higher and more to the center. The lower and more offset pinion allows more teeth to contact the ring gear, which makes the Ford stronger. Some say that this contact makes the 9-inch less efficient because it has more friction, but the strength definitely outweighs the drag.

While it may be important to keep your customer’s vehicle brand specific, remember that neither the GM 12-bolt nor 9-inch Ford has been produced for years. Any upgraded rear differential you choose from an aftermarket company for your build is going to be an aftermarket rear differential. It may look like a 12-bolt, but will really be considered the manufacturer’s name brand rear.

Put in whatever rear differential you want, but make sure it’s going to be tough – later on if your customer ever decides to sell the vehicle, the new owner will be able to appreciate it. 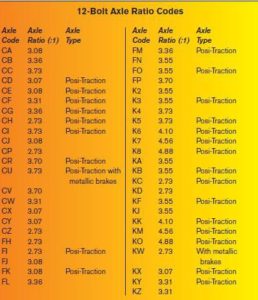 Advertisement
In this article:Differentials, GM

Dedication or Design - 12-Bolt GM is Still a Popular Differential

When it Comes to Stroker Engines – Bigger is Better

Building an ASCS Sprint Car Engine
Connect with us