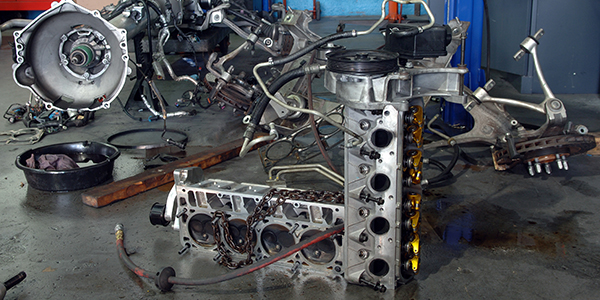 I learned early when doing an engine for a customer, especially a partial job, with the end user finishing construction, the importance of knowing that person’s capabilities – or better put – incapabilities. Over my many years I have witnessed some amazing engine bloopers.

I learned early when doing an engine for a customer, especially a partial job, with the end user finishing construction, the importance of knowing that person’s capabilities – or better put – incapabilities.

Over my many years I have witnessed some amazing engine bloopers. Usually those mistakes were due to inexperience, and or bad advice by “Fonzie” friends and colleagues.

This magazine’s pages could be filled with bloopers I have witnessed in my 50 years in the automotive and engine business. I know I am not alone. I am sure many of my colleagues have experienced similar incidents.

For your amusement, here are a few favorite examples of mine.

This one involves a 351 Cleveland about 30 years ago. That day, I stopped after work for gas at our local Texaco station. A young man comes running out to me from the center Texaco bay where I see several teens inside hopping around a nasty sounding, metallic clattering ’71 Boss 351 Mustang.

The young man running to me yells,  “Animal Jim! Just who we need!” Back then, I was young enough to be able to hear over the clattering noise. They had put a fresh engine in the Mustang, started it up, but had no oil pressure. I instantly yelled, “Shut that damn engine off!”

That engine was not my work. Thank God! Another shop had rebuilt the short block and heads, then turned the block and heads over to my young friends, who finished the engine assembly and installation.

I knew them all. They were good kids, so I took time to help.

First, I asked if they tried to prime the engine. OOPS! Duhhh!? Prime???

When I investigated, it turned out they had left out the oil pump to distributor drive shaft. We found it in the box of the old parts. While helping to remedy their blooper, I stressed the importance of priming a fresh engine. Amazingly, that engine survived. Miracles can happen.

Blooper 2. Another favorite blooper – this one did include my work. Around 1980, my customer and his son had their prized ’71 LT1 Corvette convertible in the local HS Auto Mech class to find out what it was missing. The class removed the heads and brought them to me to recondition. After the refurbished Animal Jim heads (which did have a couple bad valves and guides) were reinstalled, the Corvette still did not run well.

The complete car ended up in my shop. My man Gary and I, while verifying the valve lash, discovered 5 and 4 rocker arms did not move when cranking the engine. The cam and lifters were wiped out. What dazzled me is how anyone could adjust those solid lifters and not notice. The father had me rebuild the rest of the engine. Problem solved.

Blooper 3. About 1975 a ’70 BBC HP 402 engine hit my door after it had been put together in the same HS Auto Mech class as blooper 2. A reliable professional machine shop did the basic machine work, but the project went severely down hill after that. It was amazing it even ran. For the finale, the oil pickup had fallen off the oil pump.

So the complete engine was brought to me and I ultimately rebuilt it for the customer. I found too many mistakes to mention. The topper was – the boys had put 396 rings in the 402 allowing  .100˝ extra ring end gap.

The boys did provide a defense: the dimwit parts store clerk convinced the HS Auto Mech kids they needed rings for a 396, not a 402. The ignorant clerk only knew a 402 was a small block. The kids told me the clerk curtly said, “There is no such thing as a BBC 402! This is what you need!” And dealt them a 396 ring set. OOPS!

To be sure, I always insisted on ordering the parts myself.

I have found serious motorsports people are pretty apt. There is usually someone involved who knows what the hell they are doing. Another one to watch for are those folks in the automotive business or sponsored by a professional shop. I have had a few blooper incidents with motorsports people, but only a few.

Automotive hobbyists who are not professional mechanics are the most vulnerable to making mistakes. Like the kids with the Cleveland, many strive to do part of the restoration/modifications to be part of it, and/or save money. As I stressed at the beginning, be aware of what customers are capable of. ν

For the record: with every job I complete, I provide a folder with a build sheet with all measurements, maintenance specs, operations performed, parts used, instructions and my phone number to call me anytime, anywhere.

Advertisement
In this article:Fast Lane