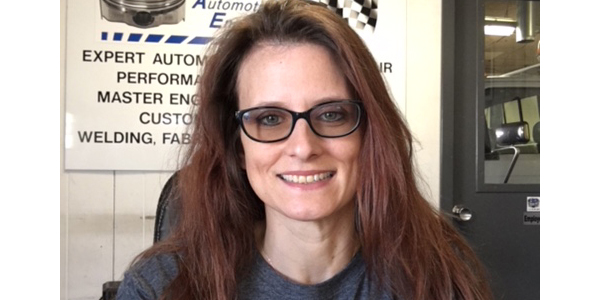 Whether it’s over the phone or over the front counter, customers – many of whom are women – are often intimidated by what they don’t know when it comes to their cars. 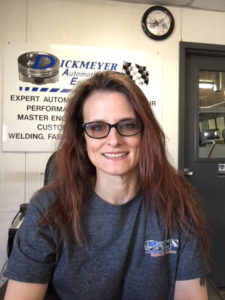 When Doug Kaufman first approached me to write for Engine Builder magazine, I was flattered. Who wouldn’t want to share words of wisdom with thousands of engine building professionals?

Then I got frightened – what words of wisdom do I have to share?

Then I got fired up – of COURSE I have words of wisdom to share with professional engine builders! After all, I’m an important part of our shop’s success and I have stories to tell!

Let me start by introducing myself. Many of you are familiar with the work of my husband, Matt Dickmeyer. We own Dickmeyer Automotive Engineering in South Whitley, IN, and Matt was named the 2017 Race & Performance Engine Builder of the Year by Fel-Pro, Speed Pro and Engine Builder magazine. He’s been a contributor to and the subject of numerous articles in this magazine over the past several years.

All that’s well and good, but I’M usually the first person the customer interacts with. And if that meeting doesn’t go well, our business can suffer.

Whether it’s over the phone or over the front counter, customers – many of whom are women – are often intimidated by what they don’t know when it comes to their cars. They are often worried that not only will whatever that light on the dash means cost them a lot of money, they’ll be publicly ridiculed for screwing something up in the first place.

I grew up in the automotive industry. Before kindergarten, I remember sitting on the fender of a car with my dad in his shop, helping him as he worked on a customer’s car. Matt and I have been together more than 25 years and during that time, I’ve done all the behind-the-scenes stuff that our business needs, but I’ve also worked in the shop and behind the counter. And our attention to customer service is what I’m proud of.

As I said, probably 60 percent of our customers are female. Many of them have told me that they feel comfortable coming into the shop because I am present and that I talk with them and I explain things to them. If it’s something that I can’t explain well enough, they’ll talk to Matt and he will explain it. But they feel as comfortable talking to Matt as they do me because he explains it on their level. That’s not a male/female thing. It’s for everyone. That person should understand what’s going on and not feel taken advantage of.

Sadly, people see TV commercials or hear about fantastic new developments and think they never have to change their oil again or that kind of thing. They think that applies in every case now and they don’t understand why their engine has problems. They’re not technically savvy and so when something happens it’s like, “Well, now what do I do?” I think the tendency may be that they’re afraid to go talk to somebody because they worry they’re going to get ridiculed for having done something dumb.

Let’s face it – a big part of my job is to be a calming presence with customers.

We feel that if you treat your customers right, they’ll treat you right. We sometimes go above and beyond just because it seems right. We had a customer who was working second shift in Fort Wayne, IN who couldn’t get to her job while her Suburban was being repaired. I picked her up and drove the 30 miles each way twice a day for a week. I was leaving here at 12:30 and then I was leaving my house at 8:30 at night to drive all the way back into Fort Wayne. I wasn’t getting home until 10 o’clock.

That may be an extreme example, but obviously many of you would do the same thing. Our approach to customer service is shared by thousands of shops across America. The female voice has a lot to say about dealing with customers and shop operations, and I for one am excited about the chance to share it! ν

I’d like to share your stories, especially if you are a wife, daughter, significant other or owner in an engine building shop or machine shop. What are your struggles and triumphs? Send your stories to me at [email protected] Who knows? Maybe your best practices will impact and inspire someone else.

Advertisement
In this article:business and management

The Face Behind the Voice on the Phone