Nicknamed the Equalizer, this 383 Ford asphalt engine was designed and built by Dewaine McGunegill of McGunegill Engine Performance (MEP), not to dominate asphalt late-model racing, but to be a great option for racers. Over the years, the Equalizer has become the popular option and MEP’s best-selling engine package. Find out what makes the 383 Ford tick.

Dewaine McGunegill is one engine shop owner who’s proud of what he has built at his shop, McGunegill Engine Performance, in Muncie, IN. Like many engine builders, his love for engines and racing was passed on to him by his father, who used to build engines for local racers running in short track asphalt racing series. Dewaine himself soon got involved in racing and the rest is history.

“I started racing myself for quite a few years, but the only way I could race was to build my own engine, and with dad having equipment, that made it very convenient,” McGunegill says. “As time went on, people started asking, ‘Could you build me one?’ Well, soon enough the racing became secondary to building engines.” 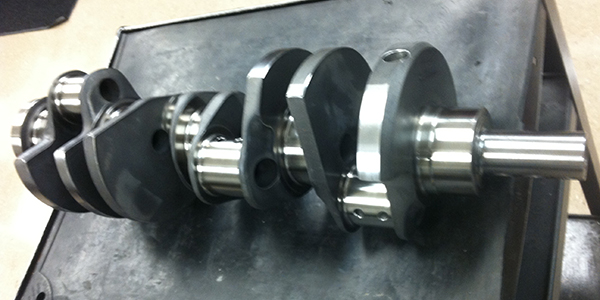 McGunegill’s dad also owned a few NAPA stores, which he decided to sell in order to fund a new engine shop dedicated to building racing engines and high-end restorations.

“It’s just grown and grown, and five years ago, I purchased the business from my dad and we moved into a 15,000 square-foot facility,” McGunegill says. “We virtually do everything in-house. We are a full machine shop, and the only thing we don’t do is CNC our own heads. I have nine employees total – seven full-time and two part-time. Our main focus is on performance engines for the asphalt racing world, but my dad taught me a long time ago to never be afraid to try anything once.” 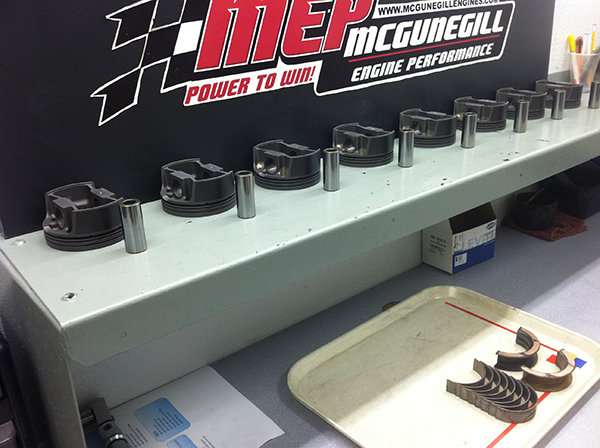 Running the shop by that motto, McGunegill Engine Performance (MEP) also does quite a few drag race engines, road race engines and a little bit of everything. Dewaine says he wants to stay diversified, but the core business remains asphalt, late-model racing.

Another major aspect of his shop that keeps Dewaine proud of what he has built is the shop’s machinery. McGunegill admits he is a bit of a machinery freak when it comes to that.

“Every time I pay machinery off I have to go to the bank, so the bank loves me,” he says. “I want the very best. I was taught a long time ago that no matter how good of a machinist you are, if you’re not operating on the very best equipment, you can’t do the very best work. So I have updated three major components in the last year, and I’m looking to do some more updating this year.” 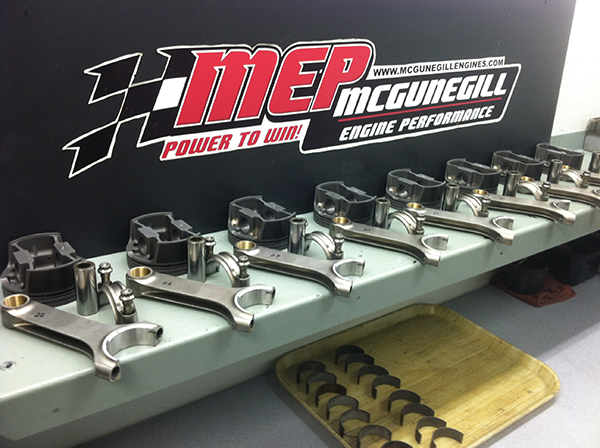 “I want to be able – from top to bottom – know what the car is doing,” he says. “When you sell an engine, it’s not just selling the engine, you’ve got to sell the whole package. You’ve got to make sure that they’ve got the right transmission, clutch and rear end in the car. All of those components matter so your engine shines.”

One of those engine packages that really ‘shines’ for customers has been MEP’s 383 Ford asphalt engine. 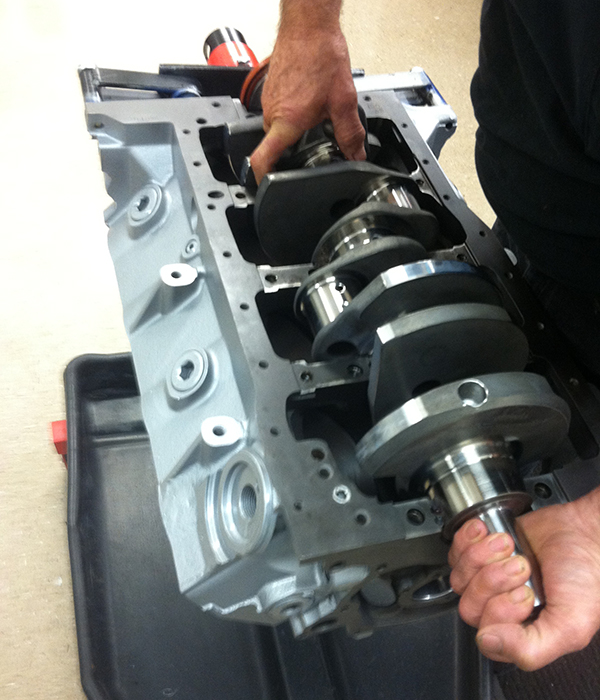 “What I call our bread and butter is our sealed engine for asphalt racing,” McGunegill says. “We make a Chevy and a Ford version. We’ve been building this engine for awhile, but because of the cost of racing and how economical this is and being low on maintenance, it is becoming very popular again. We’re selling the engine year round.”

When McGunegill says the engine is low maintenance, it can run 300 laps with zero maintenance other than spark plugs and oil. It’s a zero-maintenance, hydraulic roller engine. 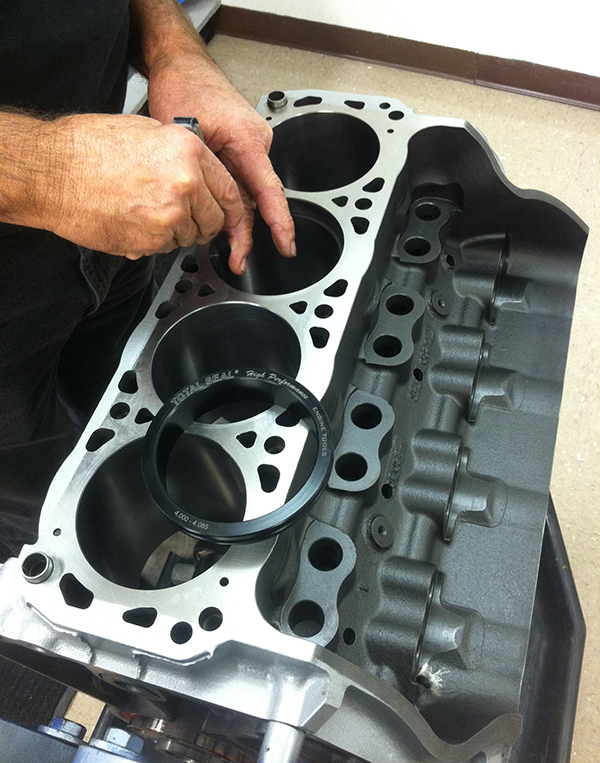 “That aspect right there has made this engine very popular,” he says. “These are our number one engines and they’re what put us on the map. I hope that we’ve changed asphalt racing in a positive way because of it. We call this engine the Equalizer because when we started this whole project I didn’t want to go out and dominate and make everything else obsolete. I wanted something equal that would fit in with existing engines and just be a good option. Well, as time has gone on, it’s become the popular option because of expense.”

MEP uses an array of aftermarket parts on the 383 Ford build, starting with a Ford Boss block. From there, the 383 features a Manley crankshaft, Callies rods, MAHLE coated pistons, a COMP Cams hydraulic roller camshaft, Dart 21-degree CNC’d aluminum cylinder heads, an Edelbrock manifold that gets hand ported at MEP, and a custom oil pan. 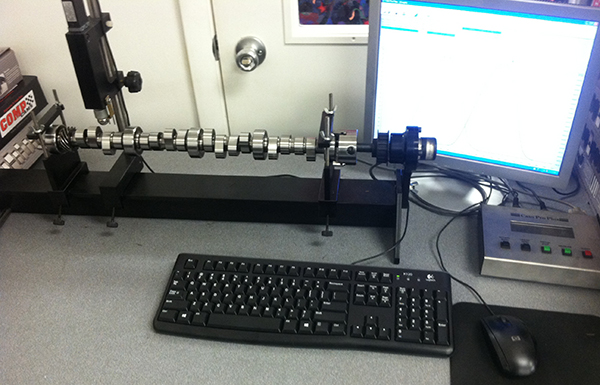 “We do a lot of little things ourselves because we know the chassis builders fluctuate and constantly change things,” McGunegill says. “We make parts ourselves or have parts made custom for us so that they’re universal and will fit in virtually any asphalt late-model.” 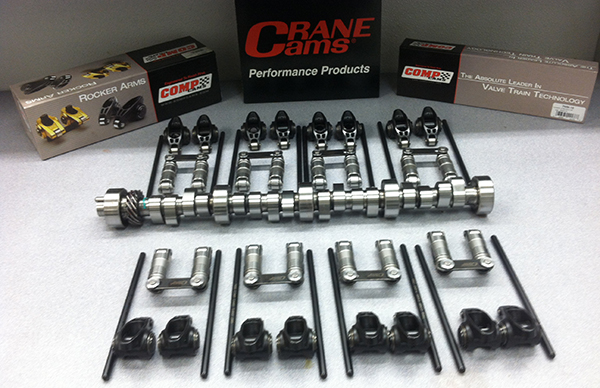 “We don’t use the shafts and that’s another reason why we can save money,” McGunegill says. “The hydraulic roller does not take as much spring pressure and there’s not nearly as much load as what a solid camshaft has on it. So we can get by with non-titanium valves and non-shaft rockers and still make the engine perform the way we want it to.”

Some of the final touches on the engine include Cometic gaskets, Michigan 77 bearings and Cloyes’ steel billet Hex Adjust gear sets. 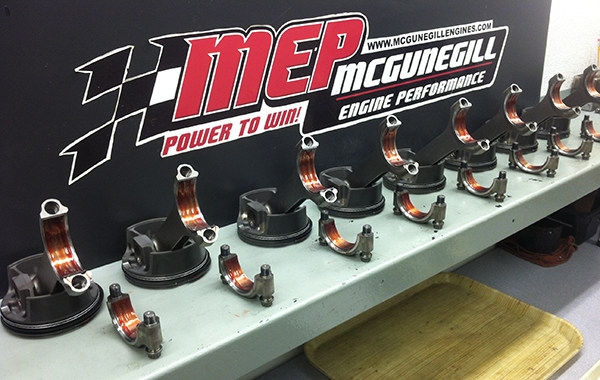 “Everything we use, we try to use off-the-shelf components to keep the costs down,” McGunegill says. “But you’ve got to have a quality component because we offer a one-year warranty on that engine to the racer from the purchase date. No matter how many miles you run it, if it breaks a rod, drops a valve or something like that, we fix it. But they don’t run without water and oil. It’s simple to know when the engine’s been damaged because of lack of lubrication or cooling.

“Over the years, we’ve only fixed a few engines for customers. We have that much faith in our product and we’ve done enough R&D work to have that faith. Racers like it too – if they’re going to spend their money, it gives them a sense of security to know that we stand behind it.” 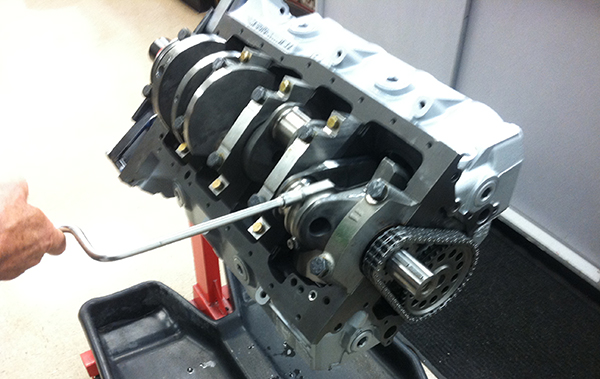 With the CNC’d cylinder heads from Dart and the overall build quality of this 383 Ford, every sealed asphalt late-model engine is capable of cranking out 600 to 610 hp.

“That’s the maximum spread that we see between those engines,” he says. “We’ve built 800 or so of these engines now over the last 12 years. If you order one today and your friend orders one tomorrow, the engines will be within that 10 horsepower range, no doubt about it.” 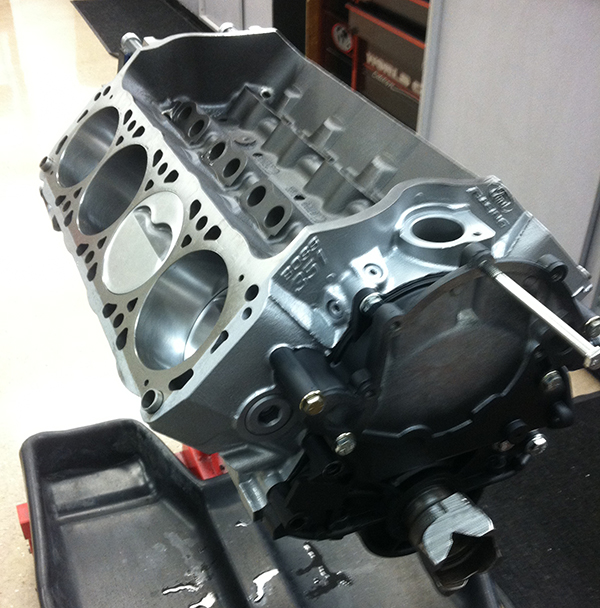 Every engine leaving McGunegill Engine Performance gets dyno’d and run through a specific break-in procedure.

“I know so many engine builders who fire the engine up, warm it up, make a couple of pulls and its out the door,”McGunegill says. “I have a whole system for breaking the engine in so that when a racer gets it, it’s ready to go racing when it leaves my shop.” 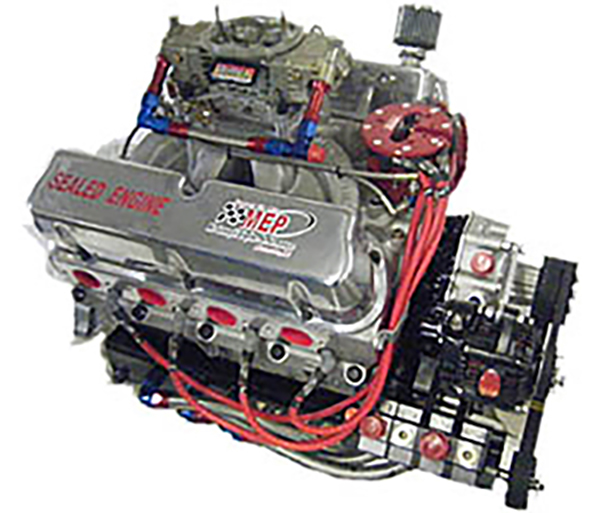