Back in 1970, Keith Diabo’s father came home with a new Buick Riviera GS and sparked what would be Keith’s calling in life – restoring classic muscle cars and engines. Not to be outdone by his dad, it wasn’t long before Keith got his first 1970 Buick GS Stage 1 in 1979, and the rest, as they say, is history. 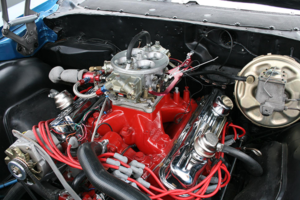 One of the popular Buick Street/Strip combo builds is this 800 hp iron block/head combo. It is a stock stroke 464˝ engine. It has run 9.75 @ 134 mph in a 3,500 lb. street car. Many of the most popular combos Diabo’s team builds are of this nature.

Along with family members Duane and Corey, Keith has been running Gran Sport Autobody in Kahnawake, Quebec, Canada since 1985. The shop specializes in custom muscle car restoration and engine work with a focus on Buick performance cars and engines.

Recently, Gran Sport Autobody had two customers request aluminum Buick big block engines. The first was a 530 cid block for a white GSX that had been in the shop more than 20 years earlier.

“We first built the car in 1996, with a Buick big block,” says Diabo. “This car has since changed hands a couple of times. Today, it has ended up with Bob Ortolani, who has become a really good customer and a good friend who lives in Syracuse, NY. The car is a street/strip car.” 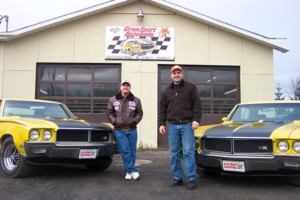 That 530 cid aluminum Buick engine puts out well over 900 hp. The second engine Gran Sport Autobody built is for a blue GS owned by Ken Montour and is also a 530 cid block. However, Keith expects it to be a little beefier than its sister engine.

“Our goal with the latest 530 cid engine is to try to meet or exceed the 1,000 hp mark,” Keith says. “It’s a really special build as far as Buick goes because it’s getting built with all top-shelf components for the crankshaft, pistons and rods. It’s a 4.400˝ stroke engine and there is a whole lot of R&D, flow testing and performance work that’s going into the TA Performance Stage 2 Eliminator cylinder heads.” 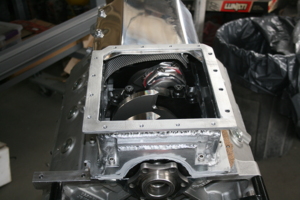 This is Gran Sport Autobody’s custom two-piece, aluminum BB Buick oil pan with extensive windage screen and fixed and hinged baffling. Designed and built in-house, owners can remove the lower half of the pan to allow for inspection and ease of header installation in the car.

The newer aluminum engine uses a TA Performance aluminum block, a relatively new piece that’s only been out for several years. For that reason, Keith says there really isn’t a textbook build established with the block yet.

“We’ve been collaborating with TA and made some discoveries through R&D and passing information back and forth,” he says. “Some of the people building these blocks who aren’t familiar with them are running into problems and having failures with them – not because there’s anything particularly wrong with the block, they just don’t know how to build them yet.”

This show-winning Buick GSX Stage 1 has one of Gran Sport’s Stock Appearing Combos. It looks Stock and “factory original” for the shows, but still runs low-11 ETS at the drag strip.

Fortunately, Diablo says, Gran Sport Autobody has had a lot of success with these engines.

“We haven’t run into any failures or problems,” Diabo says. “We discovered a few things along the way. The block isn’t simply a plug-and-play block – there has to be some additional work done. You have to square the decks; you have to line hone the block; you have to check for some clearances for the lifters and intake and things like that.”

These Buick aluminum blocks are a lot more expensive to build than the run-of-the-mill big block Chevy or Mopar, Diabo says. Right out of the gate the block is $6,000 and you have to invest at least another $1,000 or so to do additional work to it. 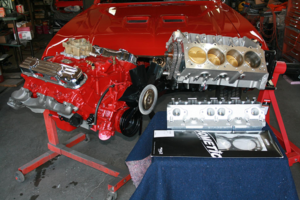 The engine on the left is a high-powered stock-appearing combos built for the concours frame-off restored Fire Red 1970 Buick Stage 1 Convertible visible behind it. This car will be put in a show as an original resto, and at the same time it will be equally at home on the street and strip.

“You have to be pretty careful with clearances because the aluminum block will expand with heat,” Diabo says. “No one really knew how much these blocks expand or what clearances they were running. We started doing  something interesting – we heat the block to operating temperature and we’re able to measure how much the block expands. Just from reaching operating temperature the deck increased .010˝ and the clearances on the crankshaft increase a couple of thousandths as well. We thought of the expansion rate of the block and we took the extra time and trouble to measure it.”

In addition to dealing with the added challenge of the aluminum block expansion, the decision to use TA Performance’s Stage 2 Street Eliminator heads rather than Stage 3 or 4 heads, also made the 530 build special considering Gran Sport Autobody managed 1,000 hp out of the engine. 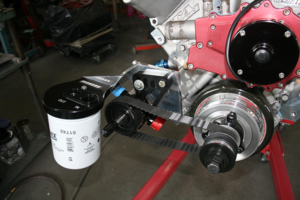 Diabo says the aluminum Buick blocks are so new that there are no components for the oiling system available. Along with having to design and build a custom oil pan, custom brackets and pulleys have to be machined and fittings and lines have to be configured to complete the oiling system. This engine will also feature an Accusump system when completed.

“The power levels we are reaching are not as easy to get with these Stage 2 Street Eliminator heads,” he says. “Most folks building these engines are using the Stage 3 and Stage 4 ‘race’ heads.”

As mentioned earlier, this 530 cid aluminum Buick engine got the custom parts treatment because there really isn’t another option. Diabo says he uses a Crower crankshaft, GRP aluminum connecting rods and Diamond pistons and rings.

“There really isn’t a kit available,” Diabo says. “It’s really very unique and very different from building a big block Chevy or something where you can buy the block and you can buy the whole engine kit with the rotating assembly and everything. The Buick is not like that at all. It can take a few months just to get the crankshaft.” 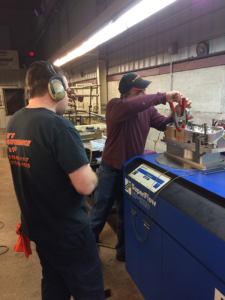 Diabo says his crew discovered that the most important component in making power with Buick engines is the cylinder head. They flow test heads on several flow benches to compare the numbers. Here on a SuperFlow 1020 the Stage 2 Street Eliminator heads going on an aluminum block build are flowing close to 400 cfm. Gran Sport Autobody also has a furnace for iron heads that heats the heads and the shop welds them while glowing red hot to reconfigure them. This allows the regular 455 Iron Stage 1 heads to flow as well as stock Stage 2 heads.

Diabo says there are rocker arms available from the manufacturer, but they can’t handle the lifts and the spring sizes needed on the cylinder head. So the build also involves getting custom machine work and custom rockers from Jesel to complete the assembly. Another unique aspect of this engine is the custom built camshaft that is made in house at Gran Sport Autobody.

“We design our own camshafts,” he says. “My brother Duane is very involved with a lot of the design work and engine builds. We have programs that we use to help figure out the camshaft.”

To top it off, the Buick big block will get Cometic gaskets and Sealed Power, Clevite or King bearings depending on the application.

Upgrading from an 800 hp factory iron block and iron heads, this blue GS Stage 1 will be seeing some faster times on the track with this 530 cid aluminum Buick big block installed.

While this Buick engine may have been  a special one for his customer, it wasn’t necessarily unique to Diabo and his team. Gran Sport Autobody has seen plenty of Buick builds in its more than 30 year history. In fact, Diabo says these builds that have been the shop’s primary existence.

“Buick engine building has always been pretty steady for us,” Diabo says. “We custom build these engines with care and attention to detail. We are often told if you do good work you will always be busy and have plenty of work – and that seems to hold true. We always have plenty of work and engines to build.”

The most common Buick rebuilds that Gran Sport Autobody sees are factory block and factory iron head engines in the 500 hp to 800 hp range with bolt-ons and modifications like aluminum intakes and headers.

Gran Sport Autobody is a shop that also does full “frame off” concours restored Buicks, so many of the engine builds are concours ‘original,’ numbers matching engines, restored to factory original specs and appearance.

“The ‘stock appearing’ factory original engine look with added performance is becoming one of our most popular engine combos for obvious reasons,”  Diabo says. “The trend of restoring rare and original muscle cars back to ‘original’ is on the rise. People may want their cars to look original for shows, but they still want them to perform well. The ‘factory appearing’ combos provide just that – the best of both worlds.”

With Buick business keeping Gran Sport Autobody running strong, Diabo and his team continue to develop different engine combinations for a host of different applications as well as R&D on various components that will get those Buick muscle car lovers down the track just a little bit faster than before.

“We are always working on different engines for different applications,” Diabo says. “Building a 500 hp Buick 455 is cost effective using readily available factory castings and is very reliable given the fact that it is a similar weight to a small block Chevy. It has a good power-to-weight ratio and there are a lot of good aftermarket parts available. There are now many 600+ hp and even 800+ hp iron block builds out there. And now, with the new aluminum block, horsepower levels much greater than 1,000 are possible.

“As more aftermarket components become available to enhance the new aluminum block, those horsepower numbers will increase,” Diablo predicts. “The Buick 455 has a bright future.”

And we can’t wait to hear all about it. ν