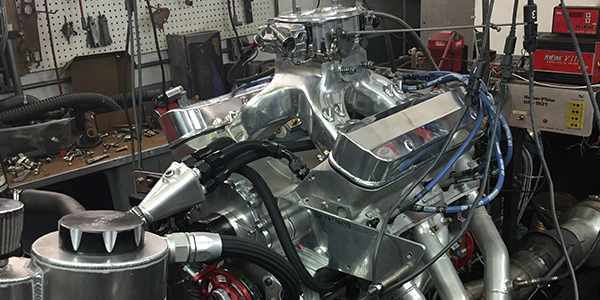 We all know this is an industry built on word-of-mouth reputation and recommendation, and no one knows that better than Bill Ceralli of Ceralli Competition Engines. He recently had a customer come to him on a recommendation from All Pontiac to build him this all-aluminum, 535 cid Pontiac engine for drag racing. Find out how this brand new build ended up churning out more than 1,000 hp!

When your family has been in the automotive repair industry for nearly 100 years, you might say you know a thing or two about cars and engines. That’s certainly the case for Bill Ceralli, the owner of Ceralli Competition Engines in Paterson, NJ. Ceralli’s family started an auto repair garage in 1922 and ran it until 1972. As such, when Bill came around and was growing up in the ‘50s and ‘60s, he was hanging around muscle cars and quickly got interested in drag racing. 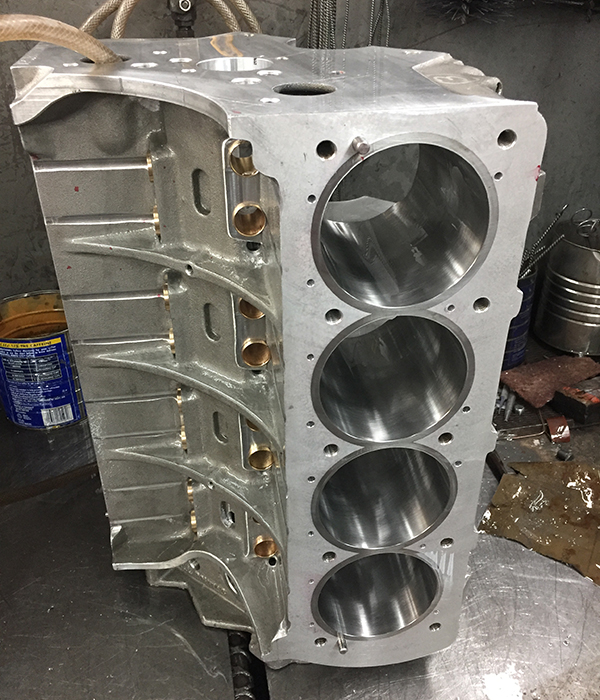 “I got involved with cars and got involved with drag racing in the ‘60s,” Ceralli says. “I had professional engines built by Tony Feil who just recently passed away. He’s a friend of our shop and a long time associate, and he went into business in 1962. When I was racing early on, he built my personal engines and I would hang out at his shop. That got me drawn into the need for speed and the need to accomplish things with engines – to make changes and see things happen. We put this effort in – we modified this, we milled that, we ground this – and we went back to the track and it ran better.” 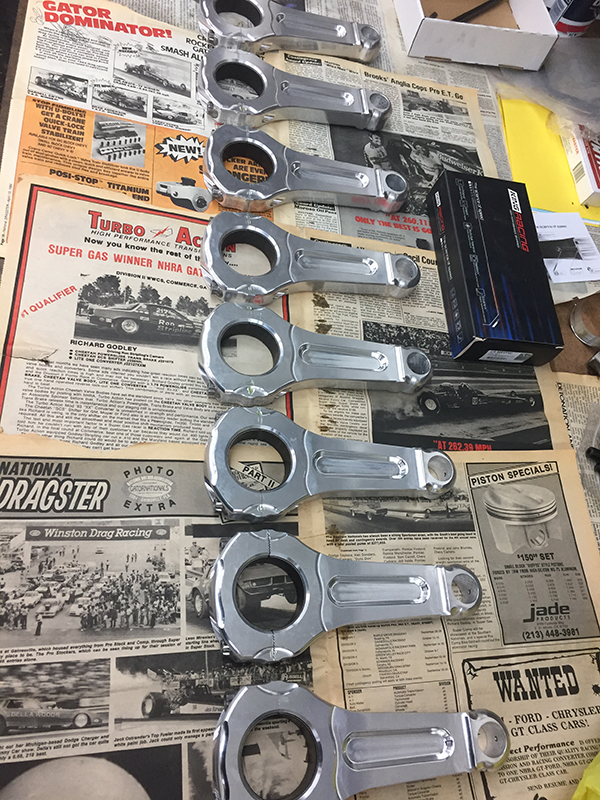 Taking his new found interest and what he had learned working alongside Tony Feil and from his childhood, Ceralli decided to take his own shot at the race engine business, and started Ceralli Competition Engines in 1970.

“I got satisfaction out of being able to take stuff and modify it and then actually see the improvements and just felt that was rewarding,” he says. “I developed a passion for the work and that’s what kept me in it and dragged me in deep. The next thing you know, you’re renting a building and buying equipment and you’re on your way.” 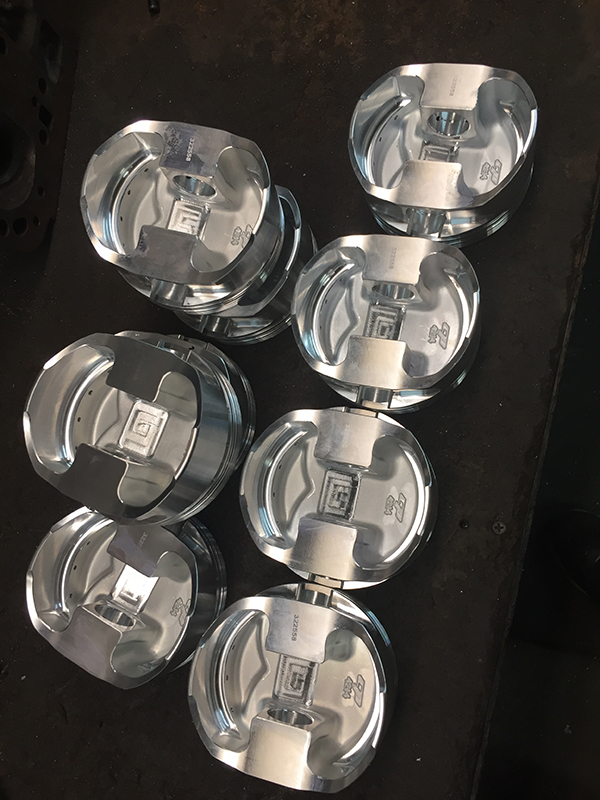 Ceralli Competition Engines is a full machine shop with 3,000 sq.-ft. of space and three full-time employees. The only thing the shop doesn’t do in-house is grind crankshafts.

While Ceralli opened up shop in 1970, it wasn’t long before his engines were starting to make some noise out on the track.

“In the mid-‘70s we were involved with a lot of NHRA Stock and Super Stock stuff, and we set quite a few national records in that era,” he says. “From that era and into the ‘80s and early-‘90s we probably set close to 40 records in Stock, Super Stock, Modified Eliminator and COMP Eliminator racing. We had some good results with our product and we adapted to bracket racing when it became popular and when the class racing stuff became more expensive and more difficult to win. When bracket racing became popular, we naturally fell into that. We felt that’s where the market was going.” 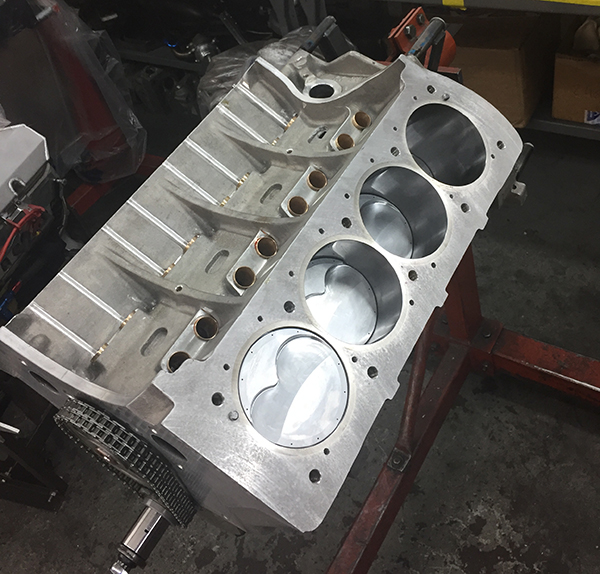 With a shift to bracket racing, Ceralli continued to improve the engines the shop built and the machines the shop relied upon, especially the dyno, which Ceralli purchased in 1987.

“The dyno is probably one of the best pieces of equipment we ever invested in,” he says. “It’s not always directly a money maker where you set the machine, it runs and when you’re done you collect X dollars – but the dyno verifies your product. It tells you that your engine is as good as it should be, or not. If not, now you have the mission to make it be right. 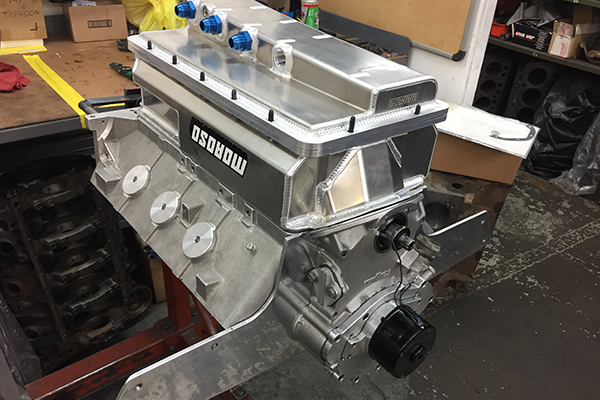 “The other thing is tuning. Our dyno is equipped with wide-band 02 sensors on each cylinder. We’re able to look at every cylinder and see what each cylinder is seeing as far as the air/fuel ratio goes. Wide band today is now more accepted as the standard for tuning versus exhaust gas temperatures (EGT).”

Ceralli’s dyno started as a SuperFlow 901, and is a hybrid of dynos today – a SuperFlow 901 with SuperFlow’s 871 absorber and data acquisition software from DYNO-mite Land & Sea. 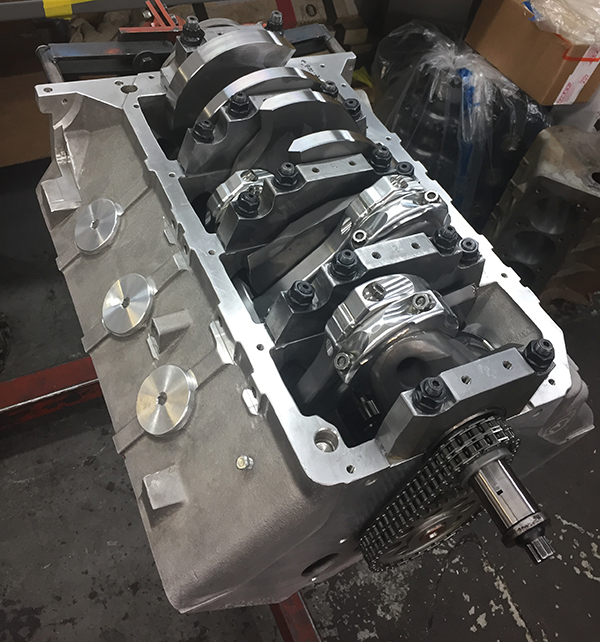 Ceralli Competition Engines has an extensive background in drag racing and bracket racing, and that’s because the shop’s specialty is high-performance domestic engines. Recently, the shop had a new customer from Virginia come in on a recommendation from All Pontiac, a manufacturer of Pontiac aftermarket components, for engine work for a drag racing application.

“This is a brand new build,” Ceralli says. “The customer acquired a set of slightly used All Pontiac Tiger heads, which we had originally CNC ported here. The customer bought them from another one of our customers. He proceeded to purchase pretty much everything new as far as the short block goes.” 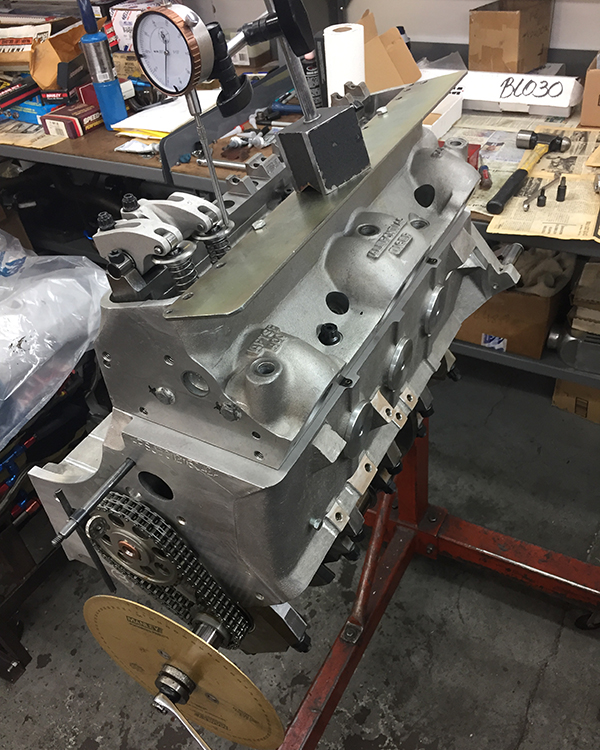 The engine is an all-aluminum 535 cid Pontiac, naturally aspirated, single carburetor with an All Pontiac Indian Adventures block and All Pontiac Tiger heads.

“The aluminum block comes with approximately a 4.180˝ roughed out cylinder, so we had to bore and hone it to 4.350˝,” he says. “We had to deck the block with a smooth finish for the MLS gaskets. We had to install lifter bushings and finish-hone the lifter bushings to .0015˝-.0019˝.” 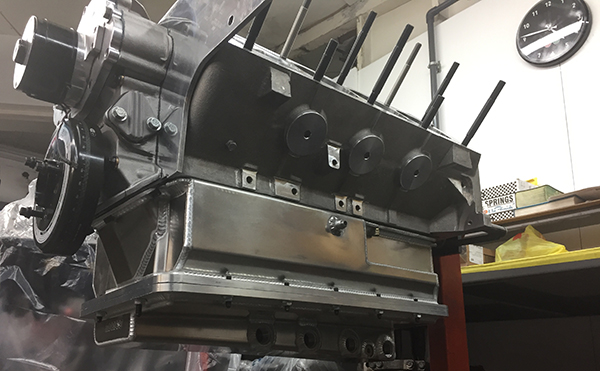 Ceralli is also running a wet deck on this engine. According to him, some of the Pontiac community tends to run a dry deck scenario where they don’t run water between the heads and block. 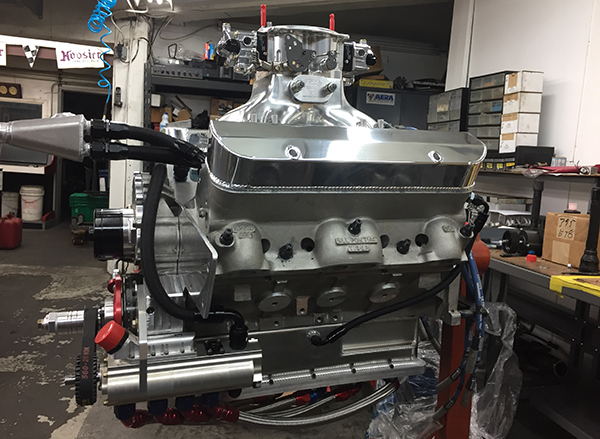 This 535 Pontiac has a 55-millimeter cam barrel and the camshaft was ground by LSM Systems Engineering in Michigan. 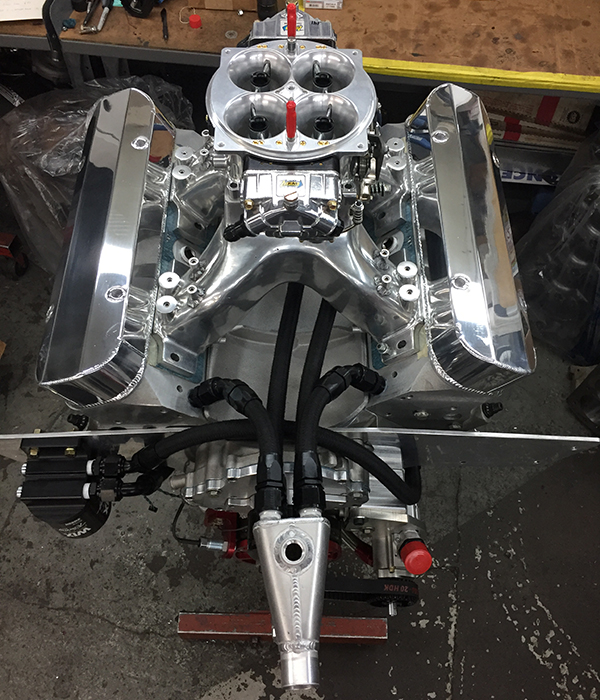 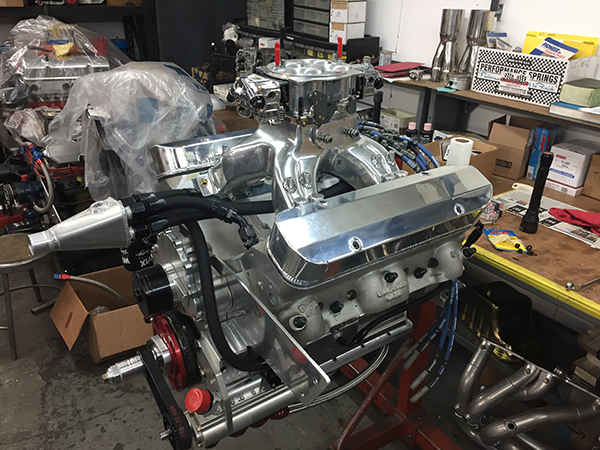 “The All Pontiac Tiger cylinder heads flow about 460 cfm,” Ceralli says. “They’ve got a 2.300˝ intake valve and a 1.800˝ exhaust valve. It has an intake manifold that’s an All Pontiac Tiger manifold that has been extensively ported by CFM South. The engine will also have a carburetor from Dale Cubic, and that’s going to have a 2.400˝ throttle blade.”

Fully complete, Ceralli’s new customer walked out the door with a brand new, all-aluminum, 535 cid Pontiac engine that pumps out 1,050 horsepower with a 15.5:1 compression ratio. We think he’ll be one satisfied customer! 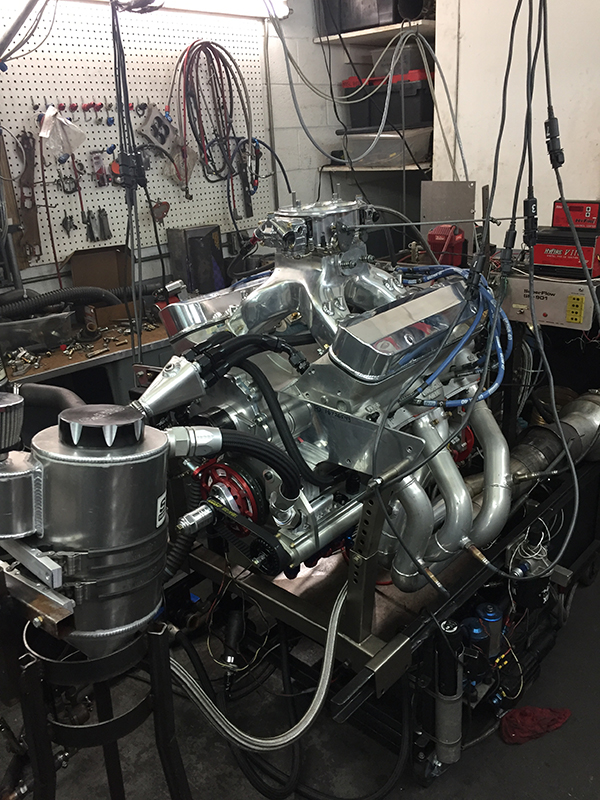