Why Do Piston Rings Keep Getting Thinner? - Engine Builder Magazine 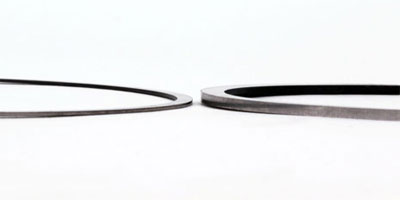 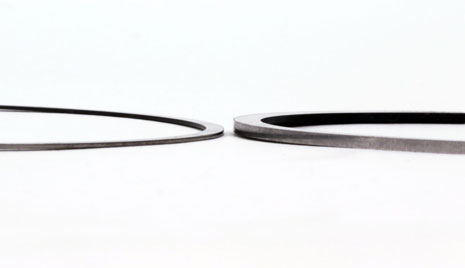 The classic Hollywood line is you can’t be too rich or too thin. While full-figured starlets may now be finding favor in tinsel town, the too-thin line is still in vogue when it comes to piston rings. It wasn’t all that long ago when state of the art racing piston ring thicknesses hovered between 1/16-inch and 0.043-inch. The current state of production engines now employs ring thicknesses of 1mm and even down to 0.8mm. Since 1 mm equals 0.039-inch, that places an 8mm top ring at barely 0.031-inch. The benefits to thin rings are multifold and worthy of discussion.

The supporting mechanical reasons for this rush to be too thin are nearly universally beneficial. Let’s start with a discussion of how a ring actually seals to the cylinder wall. If you’ve ever assembled an engine you know that piston rings need to be compressed slightly to fit into the cylinder and it requires a bit of effort to shove the piston down, especially if the piston is fitted with the old standard 5/64-inch ring package that was almost universally used for engines right up to roughly 20 years ago. 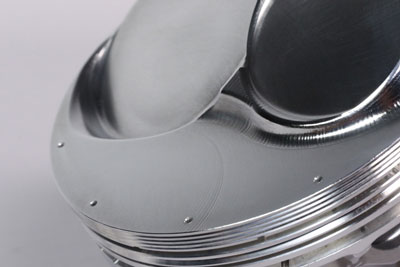 Conventional wisdom holds that roughly 50 to 60 percent of the total friction generated by a typical internal combustion engine can be traced to the piston and rings. Even more amazing is that a solid 50 percent of the piston and ring friction can be traced to just the rings. So, we’re talking about measurable gains for anyone looking to reduce friction as a path toward “free” horsepower. The potential gain is even greater for engines with increased stroke because the piston travels a greater distance, creating more friction.

Given that a large percentage of friction occurs in the interface between the piston rings and the cylinder wall, even the OE’s are paying attention. Production engines like the Gen III/IV LS families have addressed this by reducing ring thickness down to 1.5mm. The current gasoline direct-injected LT4 supercharged Corvette engines are now fitted with an even thinner 0.8mm / 0.8mm / 2.0mm ring package.

Taking this one step further, we calculated the actual contact area of an older 5/64-inch (0.078-inch) ring for a 4.00-inch bore cylinder and then compared that to a more modern 1mm (0.0393-inch) ring by calculating the circumference times the face thickness. To make it simple, we assumed a ring with a zero gap. The actual contact area numbers are less important than the difference in in contact area expressed as a percentage. The smaller 1mm ring produces nearly a 50 percent reduction in area.

It makes sense that just making the rings thinner would reduce friction, but the benefits are even greater. A specific ring thickness must create a given static load or pressure against the cylinder wall to help it seal. A thicker ring requires more outward (radial) tension because of its larger surface area. But by reducing thickness, this allows the designer to also reduce the radial pressure to compensate for the reduced surface area in contact with the cylinder wall.

This may be difficult to grasp so let’s use an analogy. Let’s say you weigh 200 pounds and decide to take a walk in deep snow in the woods. Standard shoes sink into the snow, but snow shoes with a larger contact area create a reduced load per square inch. Applying this analogy to a thinner ring (a smaller contact patch on the cylinder wall) calls for a reduced total load since the contact area is smaller. The thinner ring demands a reduced axial load so the thinner ring’s load per square inch is similar to that of the older, thicker version, albeit without the friction tax.

Within the three-ring package on a typical automotive piston, the oil rings create the highest individual tension or load. This load is applied through the design of the middle portion of the ring called the expander. Recent improvements in expander design have reduced the friction while still allowing the ring to remove oil from the cylinder wall.

Drag racers have known for decades that one way to minimize friction is to reduce the tension of the oil ring by using an expander designed for a slightly smaller bore. While this does reduce friction and improve power, the tradeoff is increased oil consumption. This is generally not a problem for a limited use drag race engine but certainly not a wise move for street or endurance engines.

A HOT ROD Magazine test in which the Westech Performance Group, led by Steve Brule’, dyno tested a 377-ci small-block Chevy fitted with a set of JE pistons configured with a 5/64- / 5/64- / 3/16-inch standard performance ring package. This 377ci engine was configured with a 4.155-inch bore and a 3.48-inch stroke. With the average power recorded over three runs, they disassembled the engine and replaced the pistons with an identical set machined for a thinner 1.2mm / 1.2mm / 3mm JE Pro Seal ring package. The results revealed a peak horsepower improvement of 6.8 hp and a peak torque increase of 3.8 lb-ft on an engine making 458 hp and 433 lb-ft of torque.

While many were surprised that the improvement increase was not a greater number, there are several factors at work here. The peak horsepower numbers were generated at 6,000 rpm. Had this engine generated peak horsepower at higher engine speeds, the results would have been even greater. Another variable is stroke. As Perkins mentioned in his story, had this test been performed on a longer stroke engine like a 4.25-inch stroke big-block, the results would have been commensurately greater.

This trend toward thinner rings also enhances ring seal because the thinner ring has a better chance of sealing to a cylinder bore that is usually not completely round or concentric. Think of a cylinder bore under dynamic load as a tall stack of dimes. When measuring cylinder bore, imagine that you are measuring it in the area occupied by just one of those dimes. If the bore is measured in several places, the diameter may read the same which many would then assume “proves” the bore is round over its entire height. However, when the cylinder is viewed from the side, the bore may in fact be more in an S-shape as opposed to being perfectly “square” top to bottom. Assuming the bore is distorting under load, a thinner ring will have a much better chance of conforming and sealing to that S-shaped cylinder wall.

Any discussion of “thin” rings must also include what the ring engineers call axial ring width – or the width of the ring as viewed from the top. The SAE has established a standard automotive piston ring axial width using the formula bore diameter divided by 22. So a 4.00-inch bore / 22 = an axial width of 0.182-inch. However, reducing this standard width lowers the radial ring tension even further. Often this is done to improve strength in race pistons where the ring package is very close to the top of the piston, leaving very little room between the back side of the top ring and the valve relief.

Being rich and thin are often associated with fame and rock star status, but when it comes to thin rings, that’s just something that will make your engine a bit more powerful. And that’s just a whole lot more fun. 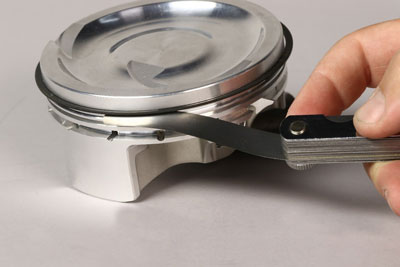 This article was sponsored by JE Pistons.  For more information, please visit our website at www.jepistons.com 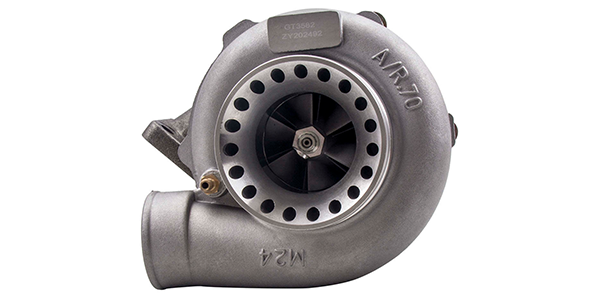 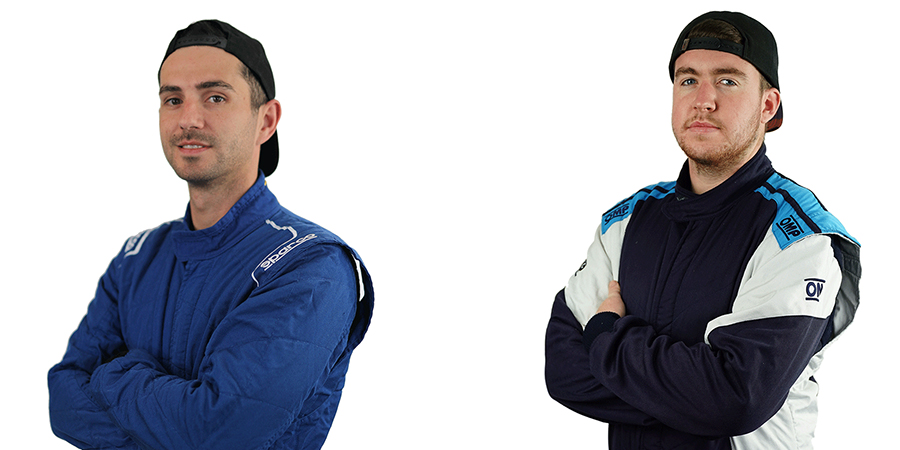 Oliver Evans, who hails from the UK, races the British Drift Championship with a Nissan S14 that is equipped with a Toyota 2JZ Supra engine. As part of the sponsorship, Evans will be utilizing MaXpeedingRods’ high-performance 4340 EN24 billet steel crankshaft, their Toyota 2JZ Supra connecting rods, and their racing turbo.

Cleaning is being done every day and is an integral part of many businesses and their processes. One of the most commonly asked questions about using sodium bicarbonate (a.k.a. baking soda) as a blasting abrasive is simply: How does it work? Let’s start with: What is abrasive blasting? Abrasive blasting uses either pressurized air or

Forged pistons have been made in the same way for decades, with differences in machining differentiating one supplier’s product from another. But now, a new development called Aligned Grain Flow Technology (AFT) provides a breakthrough for additional strength without additional mass. After several years of experimentation and development by JE Pistons’ Advanced Product Development group,

Piston crown coating is a surprisingly affordable way to increase engine efficiency, horsepower and durability. It’s often said the internal combustion engines, which hold a special love/hate place in our heart, are basically air pumps, and while that’s a useful mental model when considering many aspects of how they operate, it’s more accurate to say

It’s been more than 100 years since the idea for a turbocharged engine was developed. Originally their use had been limited to very large diesel engines and while there have been additional innovations for use in automobiles, it was not always the most popular power adder. The boost was powerful but the cost was too 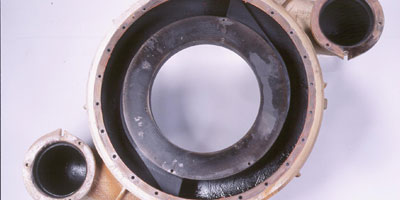 Sleeving an engine block is done for two primary reasons. The first is to repair a cracked or otherwise damaged cylinder to save the block. The second is increasing displacement by allowing for a larger bore size. In either case, the sleeving process must be performed carefully to ensure satisfactory results. Careful measurements are required 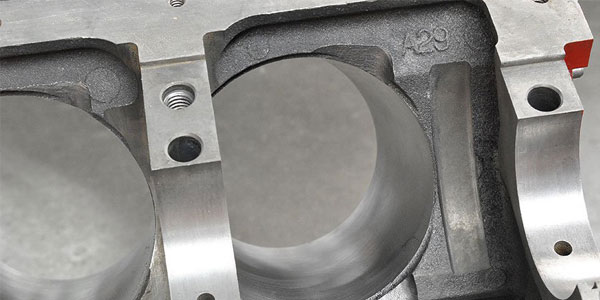 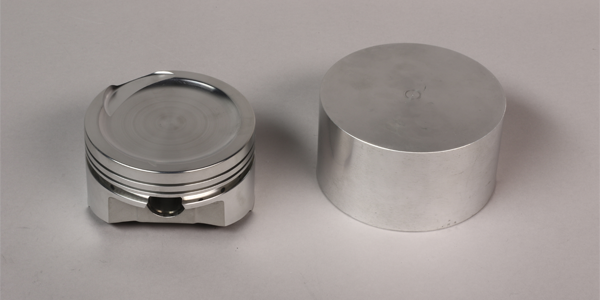 As the trend of “last mile delivery” picks up speed, fleet and repair shop owners are faced with the consequences of stop-and-go driving and extended idling periods. Anticipating these challenges and meeting them head-on will ensure a solid place in this market that’s set to grow exponentially. 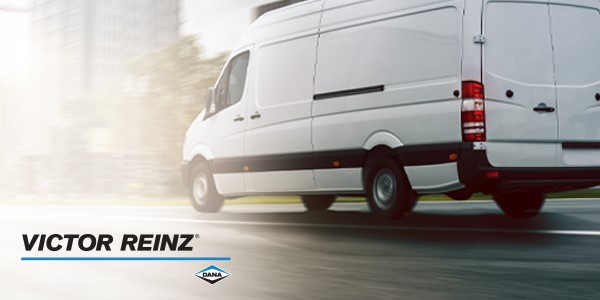 Installing Connecting Rod Fasteners—Tips And Tricks To Get It Right 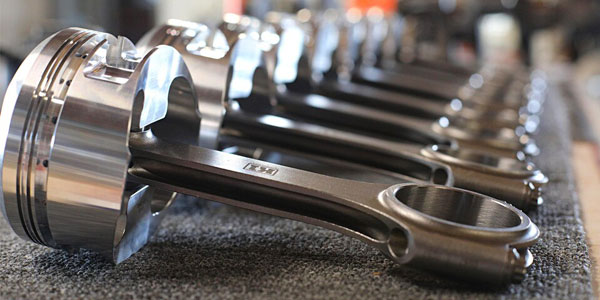