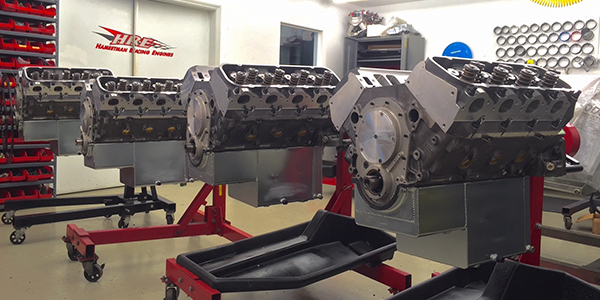 Daryl Hameetman of Hameetman Racing Engines didn’t have to build one, or two, or three, but rather eight engines for a customer in South Africa with two 50-foot boats that house four engines each! The eight identical 588 cid big block Chevy-based marine engines allow these boats to cruise at 140 mph! Find out what went into the logistics and an engine build of this caliber.

Plenty of engine builders around the country have experience shipping engines internationally. However, Daryl Hameetman has to do it on a higher level. Hameetman, owner of Hameetman Racing Engines (HRE) in Cape Coral, FL, has a customer located in South Africa with two 50-foot Nortech Cat boats that Hameetman has serviced for years.

Most engine builders simply ship the engine itself back and forth when rebuilds need to be done. However, these two 50-foot boats each house four engines and need to be shipped in their entirety so HRE can do the install, paintwork and upholstery. This time around, due to saltwater damage and years of use, all eight engines needed to be replaced. 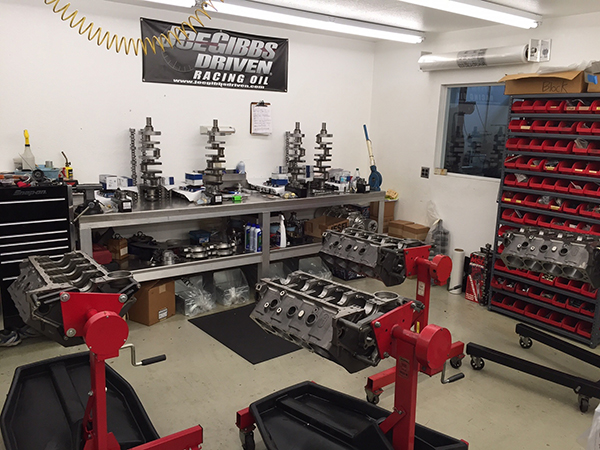 With 7,000 square-feet of space and four full-time employees on hand, HRE was ready for the massive job.

“We built this customer’s engines back in 2005-2006, and we have since done some rebuilds for him,” Hameetman says. “But this time around, due to years in saltwater, it was time for all new stuff. These were eight all new engines to replace the eight that he had.”

The new engines are 588 cid big block Chevy-based marine engines, and if you can imagine, the logistics of having two 50-foot boats shipped to Florida and then shipped back to South Africa, aren’t easy. 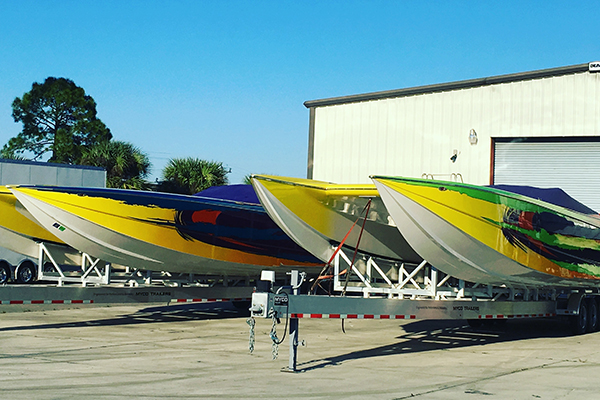 “It takes up a lot of floor space,” Hameetman says. “We basically had one boat in the shop at a time. There are some elaborate fixtures to get the engines in and out. It’s not very cut and dry. They’re very labor intensive.”

When the work is done, the boats are wrapped in shrink wrap, put on trucks to transport them to California and then put on a ship back to South Africa.

“There’s a lot of behind the scenes hours on stuff that’s not engine or boat related at all just to get them back and forth,” he says. “Doing the installs in-house gives us the ability to kind of oversee and prevent a lot of failures just due to poor installation. We’ve seen a lot of stuff over the years. There are a lot of variables that can destroy a perfect engine.” 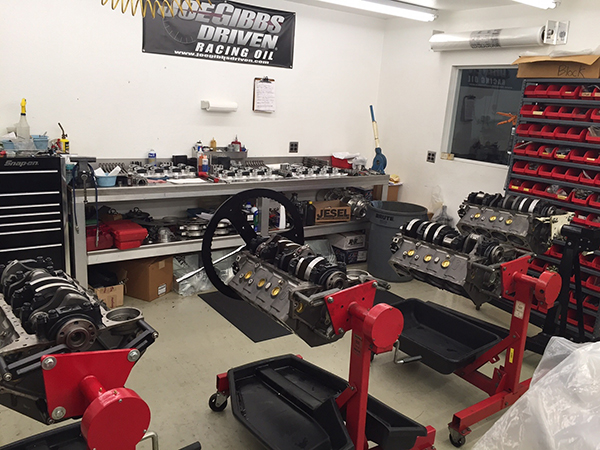 Hameetman first got into engine building at the age of 14 from his dad’s influence. He attended the School of Automotive Machinists right out of high school and sharpened his skills working at Nortech High Performance Engines in Cape Coral.

“That’s where I really started getting into the boating world,” Hameetman says. “In 2005, the boating market kind of changed to a lot of outboard center console boats that Nortech was building and they gave me the opportunity to rent the building. They didn’t really do any machining, so we added machining equipment to make it a full machine shop. From there we were able to really start building a lot of high-end boat motors.” 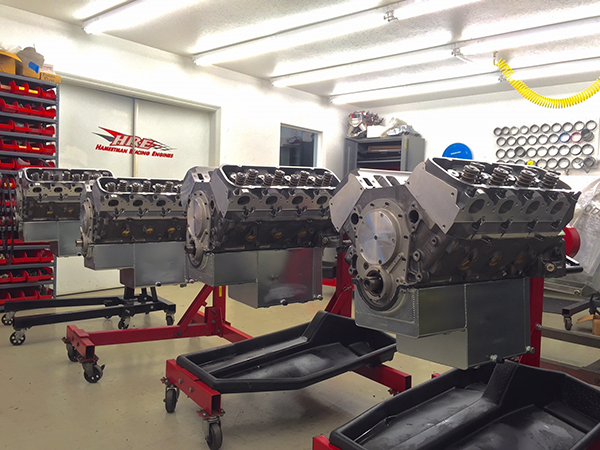 Hameetman worked for Nortech for nearly eight years before the shop had to close its doors. Hameetman took over, changed the name to Hameetman Racing Engines and away he went, working on everything from drag race engines to powerboats.

“We do everything here in-house,” he says. “We still do quite a lot of drag race and powerboat stuff. We’re doing service and maintenance for some of the offshore powerboat customers that we have and we’re also starting to focus more on the heads-up drag race stuff as well. We’re running a PDRA 632 car for the shop, so we’ve been traveling with that and trying to focus on the drag race guys because we’re spending more and more time at the racetrack.” 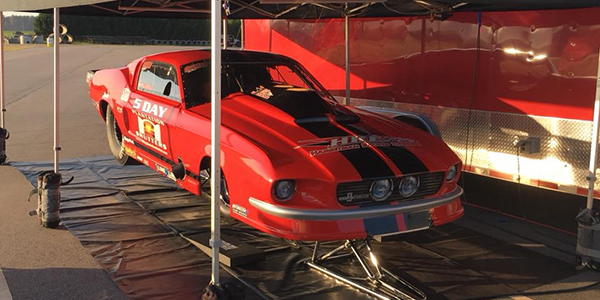 Surprisingly, when it comes to the marine engines HRE works on, Hameetman says very few of the shop’s customers are local.

“Of all the boat stuff we’ve done over the years, very little has actually been local work,” he says. “A lot of it’s from out of state – we’ve got a big clientele in New Jersey and Canada.”

Due to that experience, Hameetman’s job for his customer in South Africa isn’t necessarily out of the norm. With eight new identical marine engines needing to be built, HRE used a ‘two at a time’ technique.

“We’ve got a system down where we can build them as a pair,” he says. “Building four at a time is just overwhelming. When you try to build them two at a time it seems to work the best.” 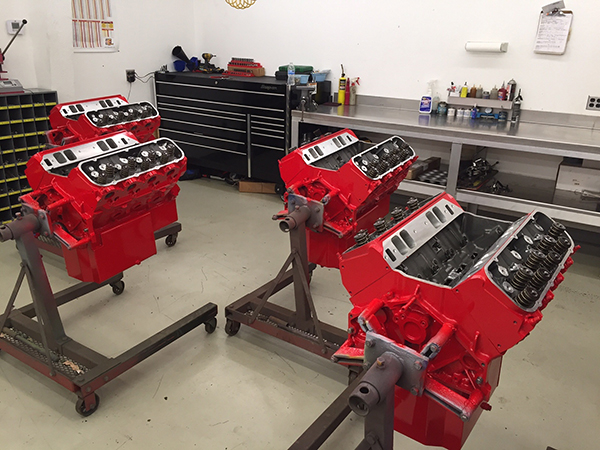 HRE started the project with Dart Big M blocks, boring the cylinders to 4.580˝ and adding bigger diameter lifters. Other machine work HRE did was the pin oiling in all of the engines.

“We also used Blower Shop intercooled setups with 1471 blowers on these engines,” Hameetman says. “We used Clevite coated bearings and Cometic head gaskets. We have some grafoil stuff made for intake gaskets and the exhaust gaskets for sealing up the saltwater on the boat.” 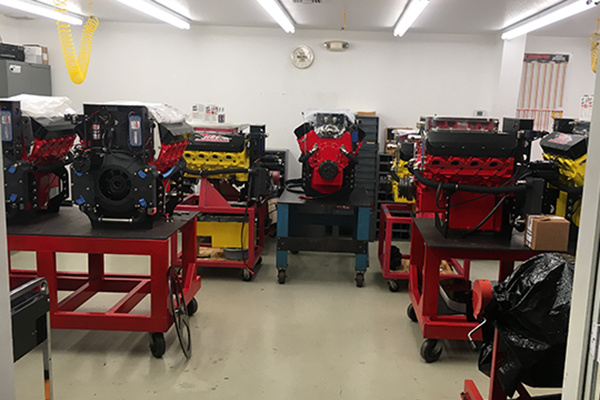 The engines also use Moroso 10-inch billet oil pumps and custom 10-inch pans. The rest of the build was really pretty basic, according to Hameetman.

“There’s always part snags, especially getting that many engines worth of parts was a challenge, but assembly-wise it was pretty smooth sailing,” he says. “The worst part is getting the motor mounts and the dress stuff correct so the engines fit back in the boat, because it’s very tight packaging.”

As a four-engine boat, each engine has its own unique mounts because of the positioning, whether it’s a port forward or a port rear engine the mounts are different. 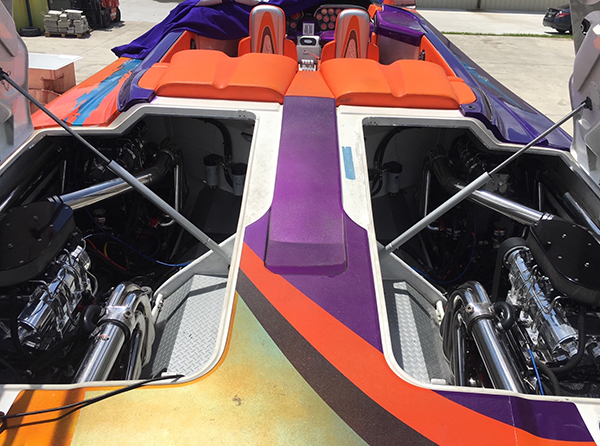 “Alternators are mounted down low and power steering pumps – some are mounted high and low and left and right,” Hameetman says. “They’re switched just to make it fit the boat because the front engine has a drive shaft – actually three – a long and a short shaft and then a carrier bearing that’s got to wrap around the rear engine. You’ve got to do the positioning and brackets so that nothing crashes into each other.”

Before all eight engines are carefully installed, HRE runs each one on their SuperFlow dyno to make sure they’re running in top condition.

“We ran all eight of these engines for about 45 minutes at varying rpm and load to break them in,” he says. “We do some power pulls, but at the end we run them to try and simulate the boat.”

All said and done, HRE has about 100 hours into these engines. These 588 cid supercharged big block Chevy-based marine engines pump out 1,025 horsepower and 1,000 lb.-ft. of torque each, with a compression ratio of 9:1. 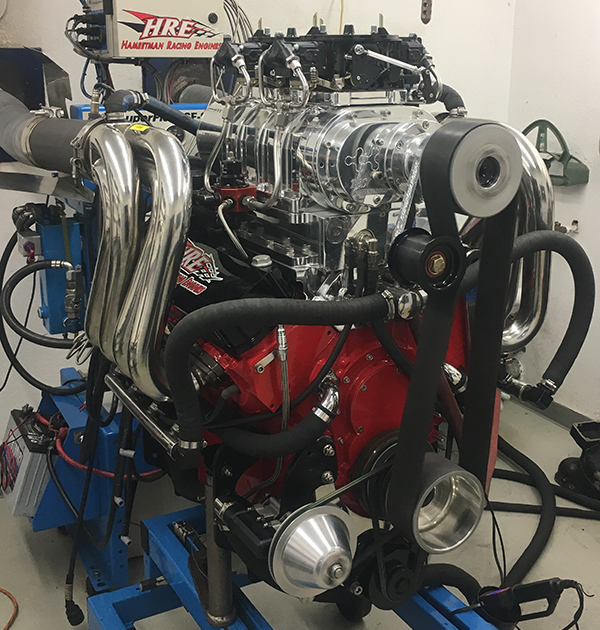 “The tune up is very mild on these engines,” he says. “The motors will make nearly 1,200 hp if we put a little boost to them and put good fuel in them. With the 89 octane we just kind of run them down.”

“The boat is propped light so that it’s got pretty serious acceleration,” he says. 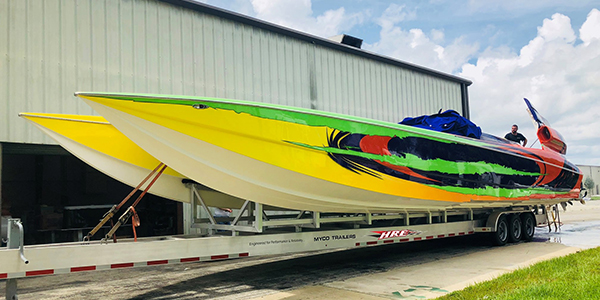 New paintwork was done at HRE as well.

While these boats can fly out on open water, Hameetman’s customer doesn’t do any offshore racing. Instead, he just enjoys being an extreme boat owner and uses them for offshore pleasure. Ahoy matey!