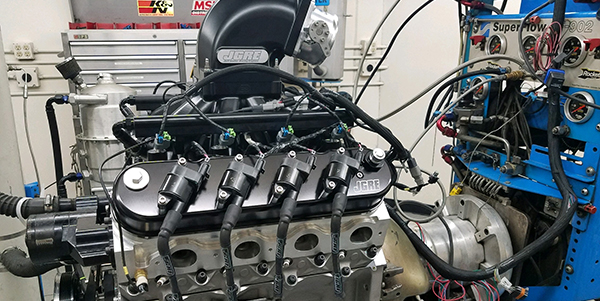 Jeff Ginter didn’t have intentions of getting back into the racing industry, but that quickly changed when a customer asked him to build an off-road endurance engine. Now, Jeff Ginter Racing Engines almost exclusively builds LS engines like this big bore version for endurance racing applications. With roughly 800 hp on tap and north of 600 lb.-ft. of torque normally aspirated, who can blame him for coming back to engine building.

Ten years ago, building an engine for an offshore boat was hands-down the most demanding build you’d ever come across. The boat’s combination of weight and size and the bouncing over waves causing the props to lunge in and out of the ocean or lake makes an offshore engine one tough customer. 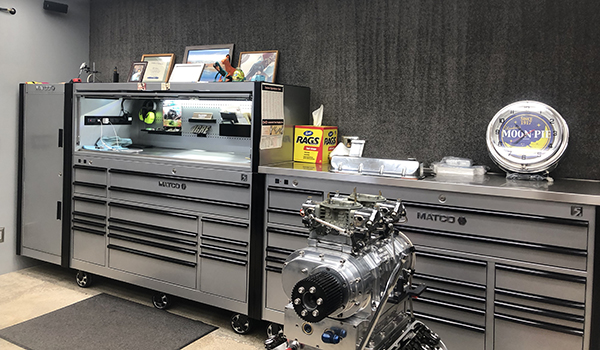 “Whether it’s us or anybody else that builds engines in this venue, if you can build an engine to live and to last in this environment, you’ve got things pretty well figured out,” Ginter says.

Those off-road vehicles are heavy and they push 800-900 horsepower engines with 38-40-inch tires all while going over washboard roads with ruts that are four feet deep and can last for a 30-40 mile stretch. And that’s not even usually the worst of it. 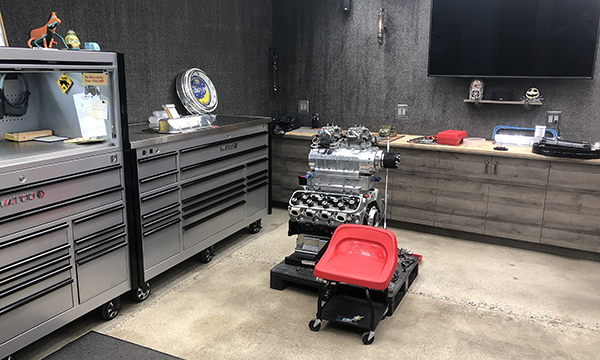 “For that engine to be trying to accelerate the weight of that vehicle and turning the diameter of those tires and the constant loading and unloading of the suspension, tire and wheel, isn’t for the faint of heart, that’s for sure,” Ginter says. “I grew up with a little bit of drag racing and a tremendous amount of sprint car racing background, and none of it compares to off-road racing.”

Jeff Ginter has been a Southern California man most of his life, and having been raised around racing, dirt bikes, Bell Auto Parts, the Weiands, Edelbrocks and Iskenderians, and having trips to Lions Drag Strip, Pomona and Irwindale at a young age, he was destined to end up in the engine building industry. 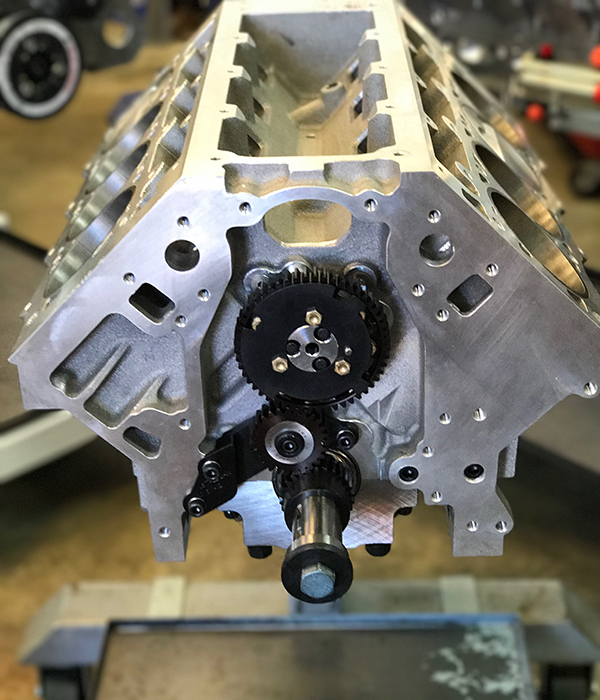 “All of that stuff was literally right here in my backyard,” he says. “I wasn’t necessarily born into it, but a lot of family and friends were always doing motor sports related vacations and activities, and that blossomed into the next related thing.”

Those influences led Ginter to jobs at companies such as Speed-O-Motive, SC Performance Wholesale, LA Enterprises and JE Pistons.

“I’ve always been more on the hard parts side of the industry – the designing of products – whether it’s the designing of crankshafts, the design of connecting rods, the tooling, the fixturing, the programming,” he says. “For me, building engines and then having a design and manufacturing background, it was always very simple because I could go back to the drag races or I could go back to the NASCAR teams and I could sit down and talk to these guys or go into the engine shops. If they had ideas or things they wanted to do or things they wanted to try, I could easily visualize how we could do it on the machine, how we can program and how we can retool. 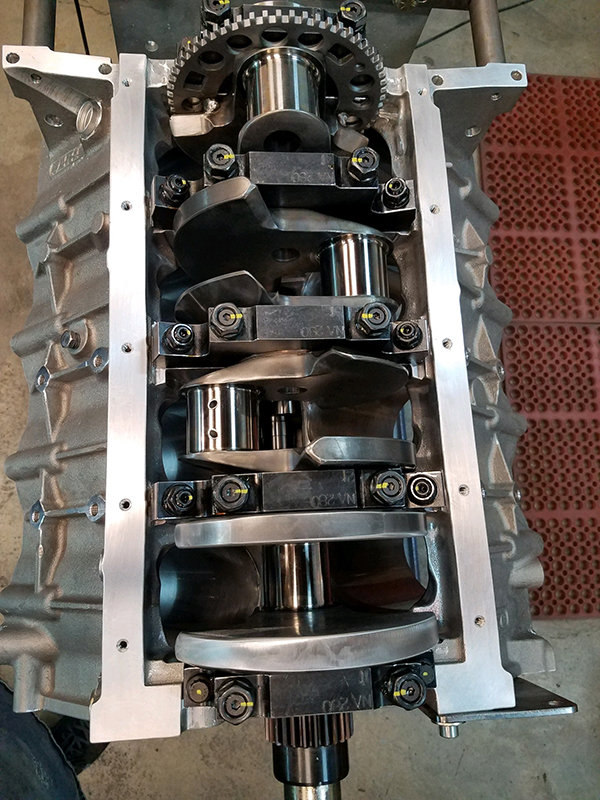 “For me, it always seemed pretty effortless and pretty seamless. Engine building just came very naturally. I’ve always considered myself probably one of the more fortunate people in that my job, my hobby and my livelihood have always been one in the same. Not many people can say that.”

Ginter left the corporate side of the industry after JE was sold. That’s when he opened a high-end pneumatic air tool business catering to large aerospace companies. However, about three years ago, he had a customer contact him about building an engine for an off-road racing team, and Jeff Ginter Racing Engines (JGRE) was born. 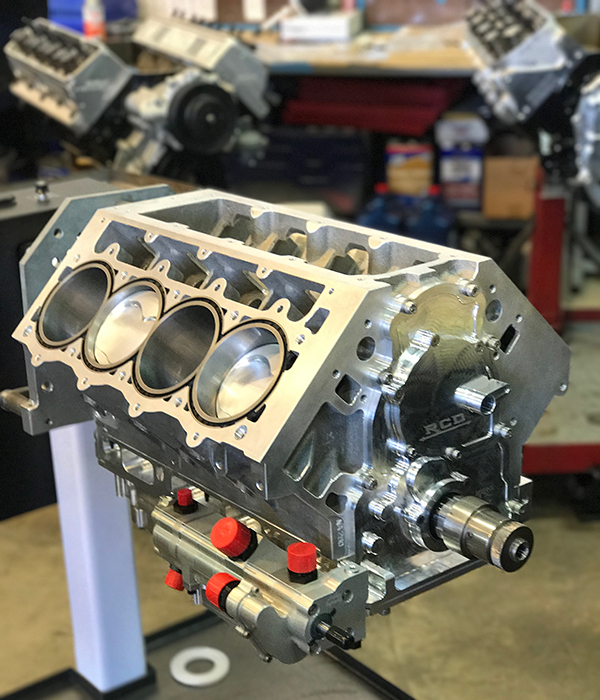 “It wasn’t that I had a premeditated idea of going back into the racing industry, however, I still stayed in contact with a lot of the manufacturers, which over the years had become friends,” Ginter says. “It organically just happened and then the next phone call came and the next phone call came. Within a short period of time, we became the ones that everybody wanted to take to the prom, so to speak. That’s how it’s gone and that’s how it’s continued to go and to grow today.”

The Artesia, CA-based shop has three full-time employees and just finished adding 1,500 sq.-ft. of space to the 6,500 sq.-ft. facility to make room for more machinery. Due to not having all of the necessary equipment, JGRE does all of it’s own assembly work, but only some of the machining processes. 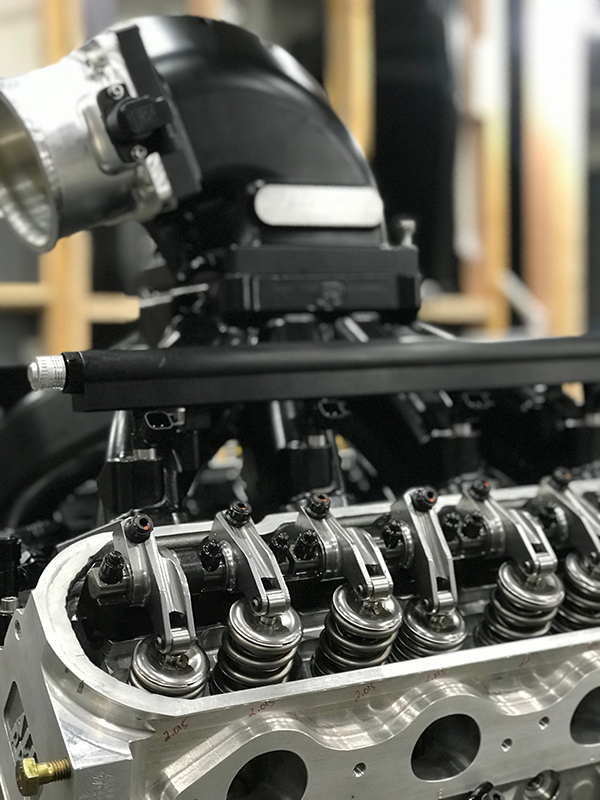 “Being located where we’re at, I’ve got a handful of really good machine shops out here that I deal with and have dealt with for years and they provide me excellent machine services and turnaround times,” he says. “Our next purchase is probably going to be a chassis dyno.”

The bulk of the engines that JGRE does are LS-based engines. The platform has become a very, very popular engine not only for desert racing, but for marine and four-wheel-drive applications as well, all of which JGRE tends to. 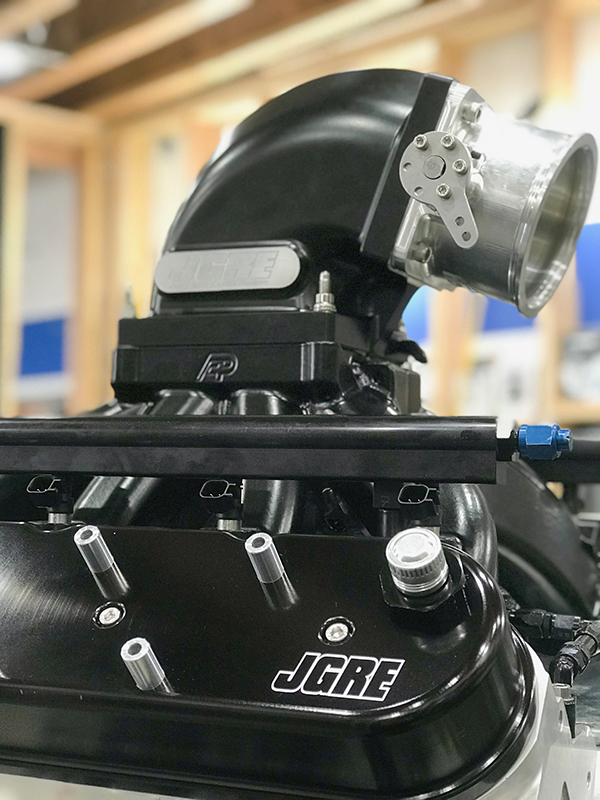 “That just keeps the phone going,” Ginter says. “I’d say it’s 70 percent of our business. The LS-based engines are obviously different from the engines of the past. These LS engines are all EFI, so it takes it to another level with all the computer programming and different computer software, the tuning and the wiring, etc. It becomes very specialized.”

JGRE recently finished a big bore LS engine that features either a Dart or RHS block to start. 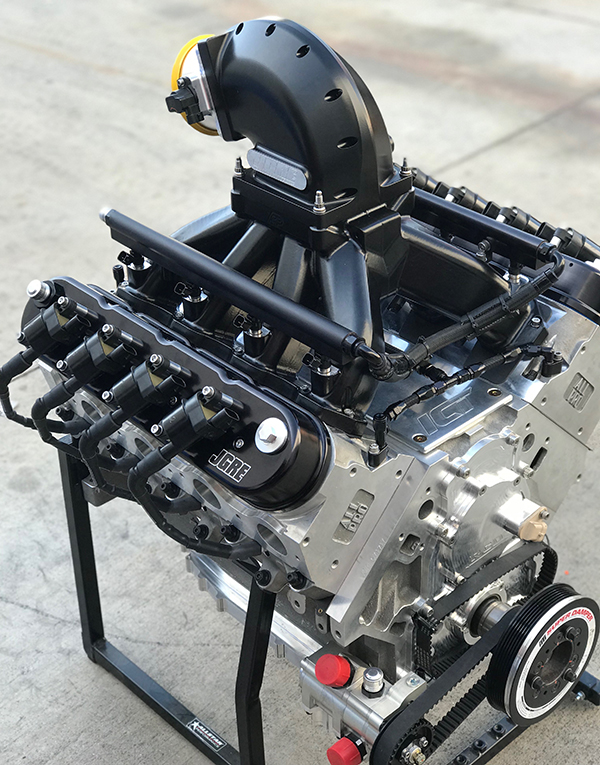 “This engine is going to be a raised cam tall deck engine,” he says. “Crankshaft-wise we run a 4.250˝ stroke crank, which would be supplied either by Sonny Bryant or Callies. The connecting rods that we use are 6.350˝ H-beam connecting rods from Callies, Dyer or Carrillo. Our piston manufacturer of choice right now would be CP. For rings, we use pretty much exclusively Total Seal rings. For cylinder heads, this engine is going to have All-Pro or Brodix. The valve springs are Pac. The camshaft is COMP Cams. We also use T&D shaft mount rockers.”

For quite a few of the engines JGRE builds, the shop runs a gear drive that they jointly developed with a company by the name of RCD. The oil pan and oil pump for the big bore LS are made by Dailey Engineering. The engine bearings are either King or Clevite and the gaskets are Cometic. 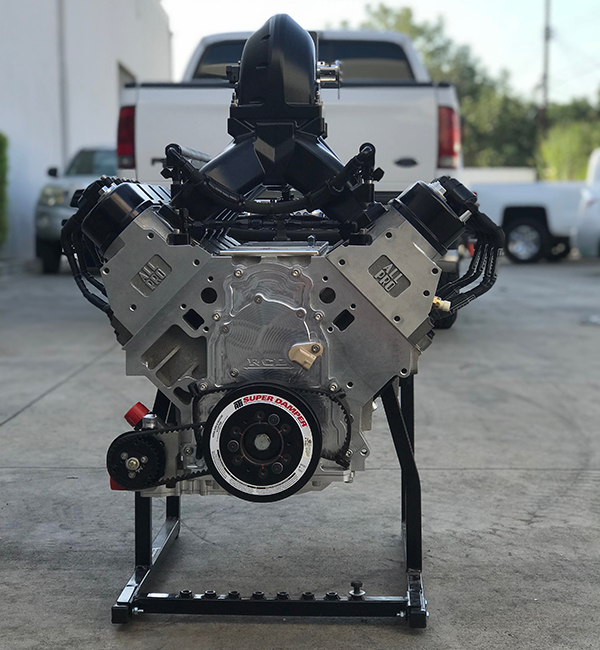 “I know the Gormans personally who own Cometic,” he says. “The company is quick to react, they listen to your needs and listen to your requirements. If you need an answer at Cometic, with one phone call I can get right to the top and I can get stuff happening real, real quick.”

With all the machine work done, these big bore LS engines generally end up in the 454–465 cubic inch range. On race gas, normally aspirated, these engines put out right around 800 horsepower and north of 600 lb.-ft. of torque. Depending on the series and where the actual engine is going, the compression ratio is anywhere from 11.5:1 – 13.5-1. 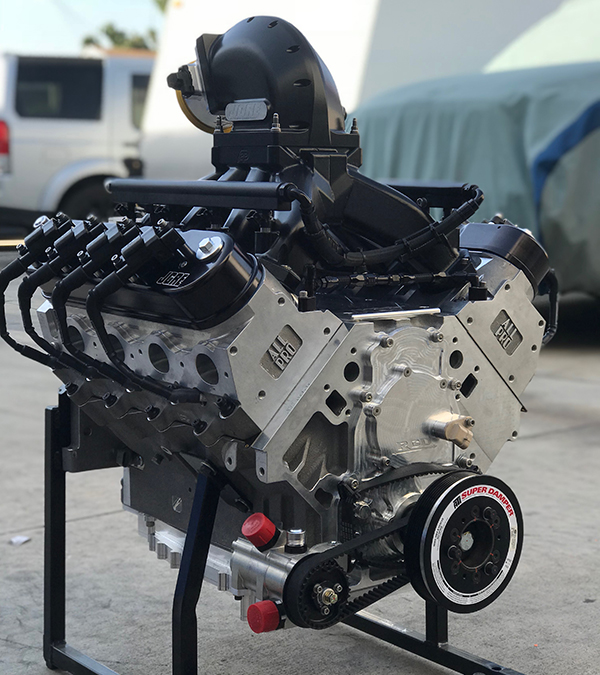 “These engines can be used for off-road, drifting or marine applications,” Ginter says. “Since we specialize in higher horsepower, endurance-based engines, we’re always searching for horsepower, but we’re not going to sacrifice 10 or 15 horsepower if we think that it’s going to cause us some longevity or some durability issues. These things have to go for hundreds of miles in the most demanding and abusive applications that you can ever imagine.”

With JGRE’s attention to detail and expertise in engine building, this is one big bore LS engine that should have no problems navigating the ups and downs of endurance racing. 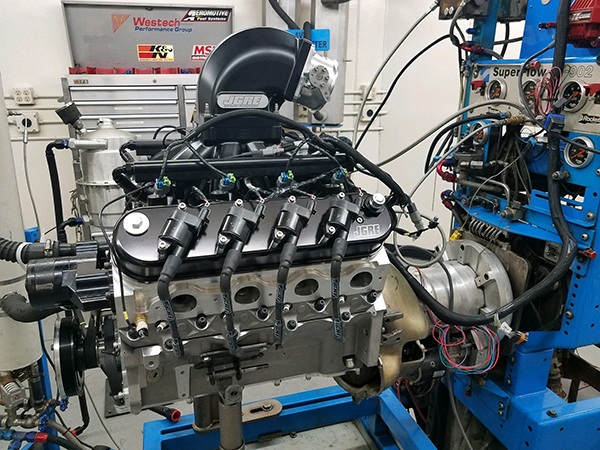