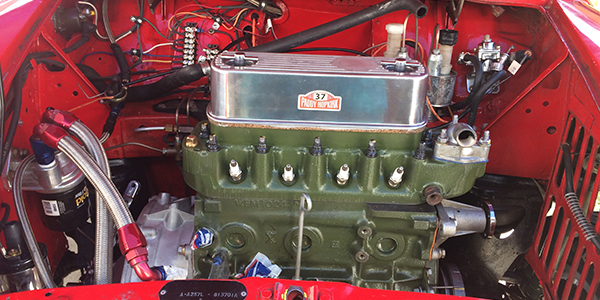 When a repeat customer came to Fowler Automotive with a vintage Mini Cooper and its British Leyland engine looking to race with it, Ladd Fowler was eager to help make it a winning combo. The job wasn’t easy, but once Fowler was done with the rebuild, the car was no longer at the back of the pack. Find out what went into bringing this British Leyland engine back to life.

At just 7 years old, Ladd Fowler would swap his dad’s Briggs & Stratton lawn mower engine on and off his go-kart. It was clear from an early age, that Fowler had an aptitude for engine work. Seeing this early passion, Fowler’s father gave Ladd hand tools and a set of welding torches at the age of 12. It wasn’t long before he was wrenching on two-stroke McCulloch engines and experimenting with car engines as well.

“In 1972, I started what eventually became my small automotive repair business,” Fowler says. “And I continued to seek out opportunities to gain further education to validate what I was attempting to do. I attended Foothill College majoring in business administration but that was very hard for me. After two years of agony, I switched to De Anza College majoring in their auto technology program. I graduated second in my class.” 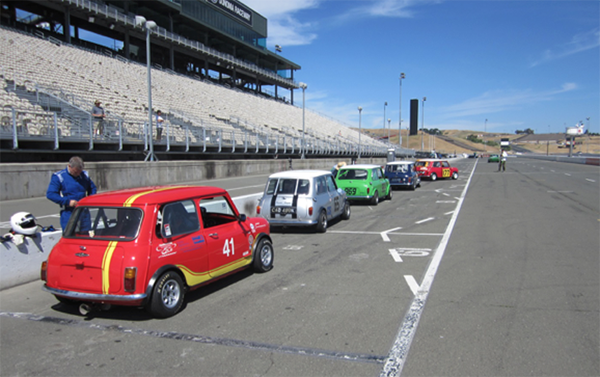 Fowler was recruited by an auto parts store to be a machinist in their three-man shop. After a year, the business owner opened a second location and offered Fowler the store’s machine shop as a solo gig. Honored, Fowler ended up turning down the offer for a job in the New England area. However, after a couple years of freezing winters, he came back to sunny California to open Fowler Automotive in 1976.

“It was an easy economic decision,” Fowler says. “I could make in a day in my own shop what took a week to earn as an employee.”

Fowler Automotive is an auto repair / machine shop capable of working on everything from small rototillers and long haul diesel trucks, to boats and even motor homes and airplane engines. 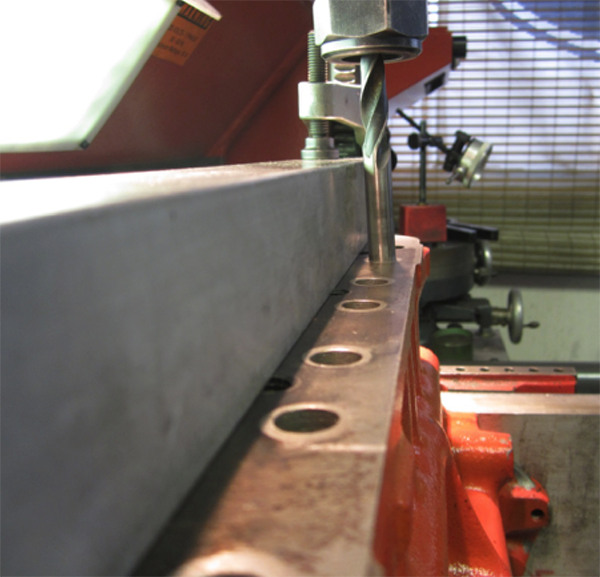 “Over those years I accumulated equipment and tools to meet customer needs as I went along,” he says. “I’ve also kept education a priority having attended GM school, Ford Industrial Engine School and countless clinics and training sessions. I sought out an opportunity to attend Cummins Engine School. I went back to college at night to formally learn welding skills and non-destructive testing processes.

“I attended an engine and head porting school. I was tutored by Allan Lockheed and Dema Elgin in advanced engine design and competition engine preparation. I was among the first technicians to be tested and awarded ASE Master Mechanic and Master Machinist certificates. Becoming and staying educated in my industry is central to the success I’ve had meeting a diverse range of client requirements.” 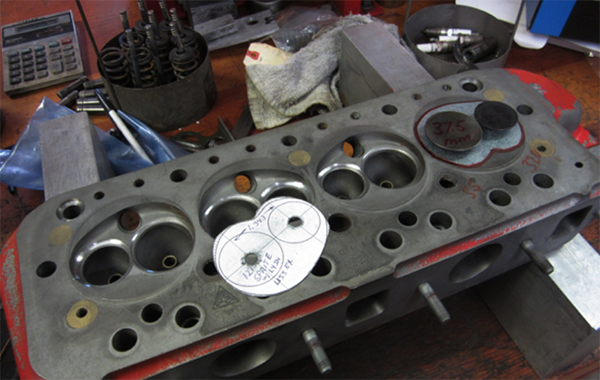 One of those diverse jobs Fowler was involved in not too long ago was a restoration of a Mini Cooper that would be used for racing. The Mini Cooper had a British Leyland engine in it. The car came into Fowler Automotive from a client Ladd had previously built a 1966 Mustang for.

“When he wanted to go racing he bought a Mini Cooper, and because he was so pleased how that Mustang turned out I was invited to straighten out the Mini Cooper after he had some bad experiences in other specialty shops,” he says. 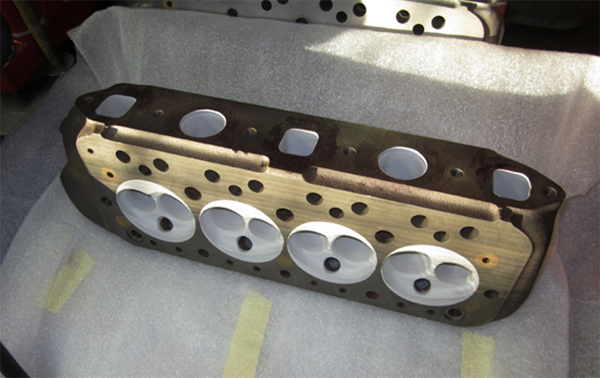 This Mini Cooper was a show car semi-converted to be an autocross play car. After being purchased by Ladd’s customer, the car experienced multiple vehicle failures such as ignition, carburetion, charging, cooling, and engine valve train interference. There were also fluid leaks, and generally poor assembly, which prevented the Mini Cooper from making an entire lap under its own power.

“I was hired to fix the car and act as crew chief for his next season,” Fowler says. “This Mini Cooper project started out as a vintage road race effort. After a couple of events I had his car running mid pack, about 6 seconds off the leaders at Sonoma and Laguna Seca tracks. To gain 6 seconds lap time versus the leaders we deliberately analyzed options open to us within class rules and known parts we could buy. The engine rules for our vintage class dictated a non-roller rocker arm assembly be used and visually period correct appearance of the engine. We had to use SU carburetors and could not modify the engine compartment sheet metal past what was done on original “S” model vehicles.” 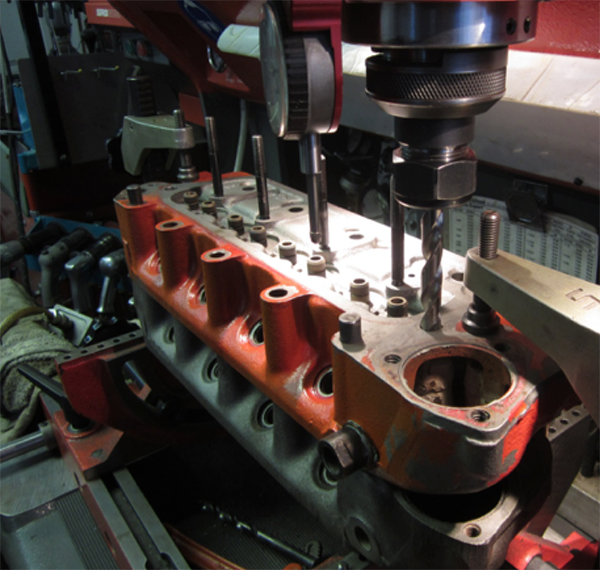 Engine work started with a new transmission gear set. Fowler also felt replacement of the differential with a Quaff unit would extend engine and tire life. Replacement of the gear sets would also allow replacement of both axle assemblies with lighter, stronger and smoother running shafts to increase power available to the wheels, and reliability. The Mini needed to exceed 110 mph to win.

“To gain more seconds on leading cars, my client’s engine would have to rev higher,” he says. “To gain top speed, and because final drive ratios are essentially limited to the one you build an engine with, the engine itself needed modification to run faster. We needed to increase engine speed above 8,000 rpm, which meant engineering for 9,000 rpm.” 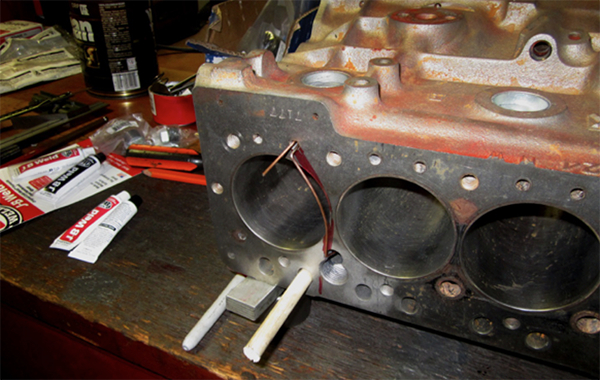 To gain that increase in engine speed virtually every part of the engine needed modification, including the induction and exhaust systems.

“Despite having a new OEM crankshaft in an ‘A+’ series block running new upgraded rods and pistons, we retired those parts in favor of a dedicated DC5-2 racing lightweight rotating assembly from Swiftune in Europe,” Fowler says. “We used a Fortech FOR098 racing damper. We also bought Swiftune’s ‘Feather Light’ lightweight clutch, upgraded drop gears, pistons, bearings, double row timing chain, and electronic distributor assemblies. We had a ‘Longman’ C-AHT221 cylinder head, but we swapped it for one I made based off casting #12G940. We bought a Swiftune camshaft and tappet set with cam bearings to suit our intended road racing use. Virtually all smaller parts like thrust washers, fasteners, and gaskets came from Mini Mania and Seven Mini Parts.” 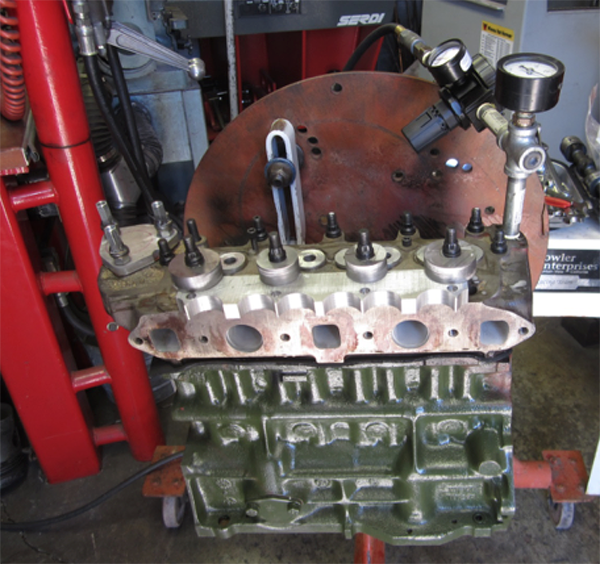 As with most vintage restorations, the build didn’t go together without a few roadblocks. Fowler’s trouble on this engine started almost immediately.

“Nearly every engine part and subassembly needed help except the actual crankshaft and rods,” he says. “By contrast the transmission and final drive kits were straight forward and nearly flawless. Beginning with the premise, ‘Trust nothing and nobody,’ I sent the Swiftune #SW2307 camshaft to Elgin cams to be reverse engineered. We discovered the camshaft provided was much closer to a streetcar/autocross design instead of the full-on road race cam we requested. We also discovered the 6cc dish pistons provided in the Swiftune kit would drop our compression ratio from mid-13s typical for Mini Cooper racing engines into the low 11s or mid-10 range, depending on what head we eventually used.” 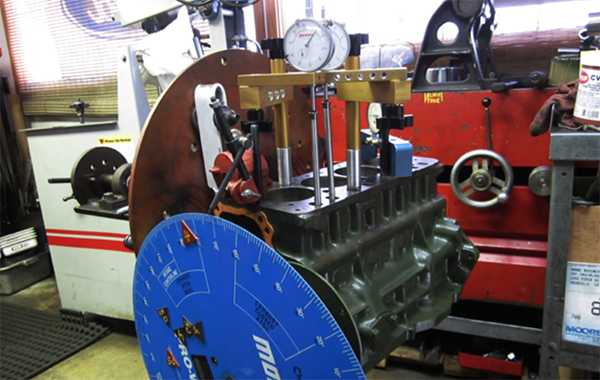 That led to two decisions: First, Fowler would live with a compression ratio loss by having a custom cam made which re-timed the intake valve closing. Second, he would optimize a new camshaft design with airflow data from a fresh head build up.

The next major challenge with the block was moving its pushrod holes inboard and oversizing them to 7/16˝ for tubular 5/16˝ custom pushrods supplied by Smith Brothers. 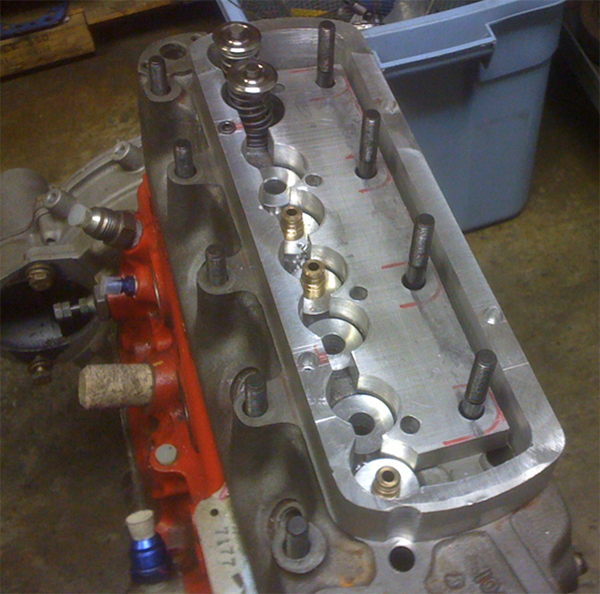 “This necessary machine work resulted in breaking into the water jacket on three of the eight holes,” he says. “Fixing those perforations required drilling 3/4˝ holes in the block’s cylinder deck adjacent to the pushrod hole.”

The next block machining operation was dowel pinning the head to the block and correcting head stud engagement length. The head could move on the block’s ARP stud shoulders more than the thickness of its gasket fire ring and could bring its oversized valves into possible contact with the block cylinder walls. 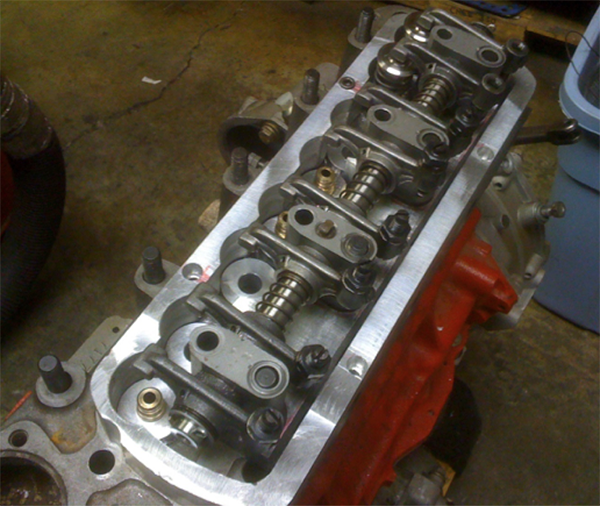 “To assure consistent assembly location, two hollow dowel pins were installed around the end studs,” he says. “Enlargement to 1/4˝ oil passageways going to the head, including machining an oil transfer slot in the forward cam bearing and around the camshaft journal was done. Adding a couple of missing threaded holes which attach the oil pump body to the block was eventually done as well.”

With significant additions, remaining block preparations more or less followed standard race engine practice. A Swain Technology thermal barrier coating was put on the piston crowns and an anti-friction coating was put on the skirts. Swain also coated the tappets with anti-friction material and coated the entire exhaust system, including some heat shields, with their White Lightening compound. 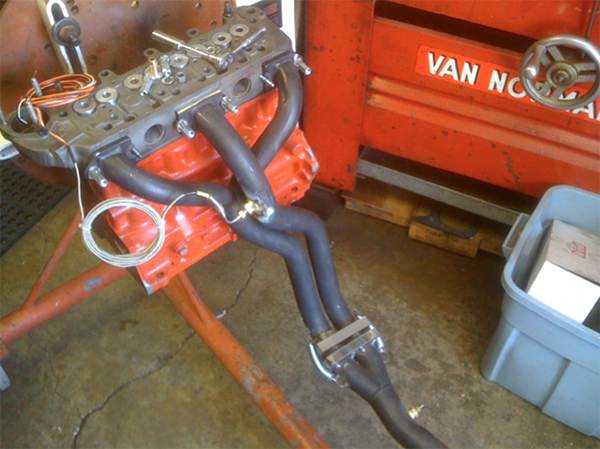 While those coatings provided some extra protection, building a new cylinder head is where the magic of this engine started. Obtaining the rpm range needed to win was not possible with conventional Mini Cooper hot rod valve train parts, so Fowler looked for titanium replacements. 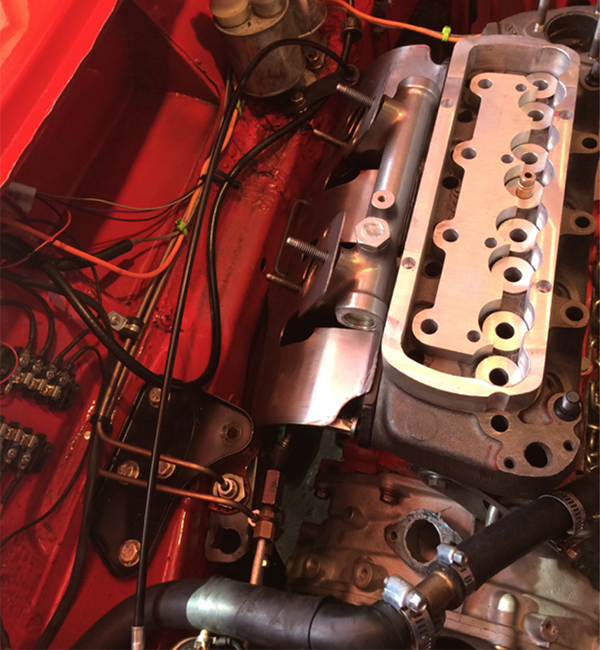 The head’s combustion chambers and ports were thermal barrier coated by Calico Coatings. Calico also coated the intake manifold. By not allowing excessive exhaust heat to enter the head casting, elimination of a water bypass system is possible. Minimization of combustion heat to the oil via the piston was also accomplished with coatings.

“Early in testing, the camshaft and tappets failed completely,” he says. “Seven of the eight lobes were essentially gone. Two tappets had rubbed through to contact the pushrod ends. Nothing was damaged except the cam and tappets. I elected to upgrade to ceramic tappets. However, ceramic tappets cannot run loose or run into valve float. Ceramic tappets cannot be allowed to pound freely against the camshaft so spring forces must be carefully selected for the rpm range an engine will achieve. I had a set made which would interface with an identical replacement camshaft but eliminate the BMC / Ford bucket style design allowing a set of shorter pushrods to be fabricated by Smith Brothers.” 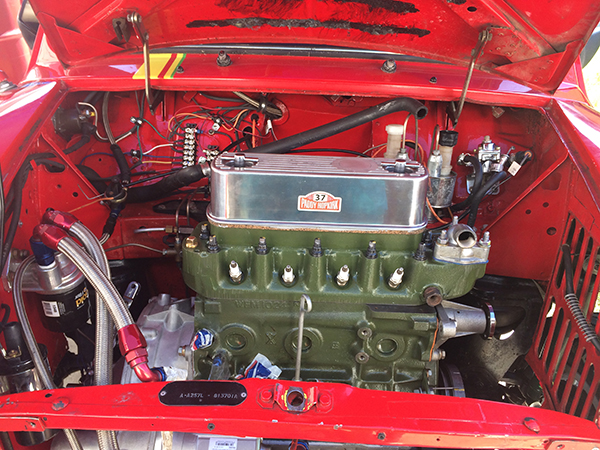 After the engine was reassembled and oil pressure testing resumed, it became apparent the upgraded race pump was not performing well. Fowler found a Brian Waters Racing BMC ‘A+’ race pump instead.

With the final pieces put together and the engine in good running condition, the Mini Cooper was ready to head to the Canadian/American Mini Challenge race. 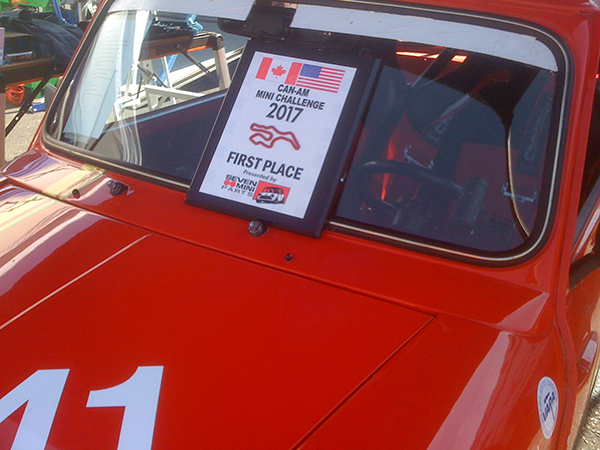 “We ran qualifying laps without any significant tune up efforts,” he says. “In testing, our engine had been timed by ear, and simply checked to be less than 32-degrees advanced. We always ran the engine on 114-octane leaded race gas despite its low compression ratio. As raced, our 1,310cc engine had a 10.2:1 static compression ratio and produced 97 hp.

“I’m sure there is more power to be found if we ever gave this engine a proper tuning workover. On the other hand, we beat a lot of cars claiming 120+ hp in their modified classes, in addition to winning the stock class outright.” 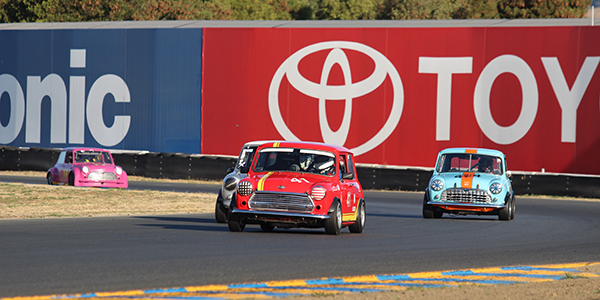 To make serious advances over what an OEM, 50-year-old engine did, requires testing and reworking modifications as an integral part of the job. A build for performance in the vintage arena cannot just be popping some pistons in and adding an aftermarket head with a catalog camshaft.

“A vintage rebuild makes more demands of its curator than that,” Fowler says. “The engine is a part of a car that only works as well as the systems which support it. Building a race engine is part of the development of a car, and an evolutionary stepping process.” 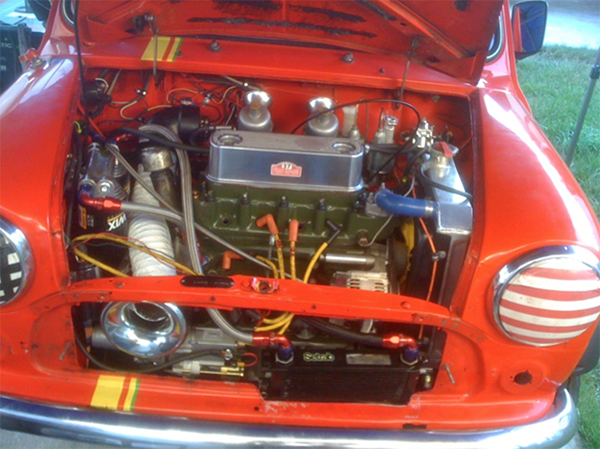 After Fowler’s engine work, this is one Mini Cooper that took a step in the right direction.