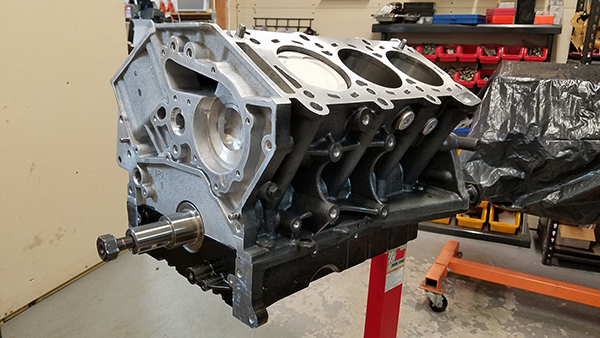 A search through internet forums on the topic of seasoned blocks might shock you about how much debate there is over whether it is better to use a new block or an old one that has been left out in the cold for months to allow the cast iron to age and relax. Ford supposedly had a field of seasoned blocks that they left outside of one of their plants in Cleveland before being machined and being moved to the assembly line. 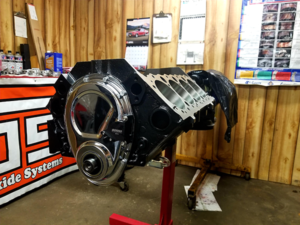 This Dart block is the beginning of a 357 small block Chevy engine built by Lowcountry Racing Engines.

In the ‘80s, BMW’s F1 team was said to have pulled production blocks from vehicles with 100,000 miles because it was thought to have better metallurgic properties than a green block for their massively boosted 1,500 hp qualifying engines.

This Dart block is for a 540 big block Chevy built by Tyler Crockett Marine Engines for a marine application.

With today’s casting and machining processes being more refined and the thicker wall castings of aftermarket blocks, there is no need to search through junkyards for that perfectly aged engine block. CNC machining and modern honing techniques have enabled engine builders and block manufacturers to achieve near perfect cylinder bore geometry.

If you are lucky enough to find a well-seasoned block from a junkyard or elsewhere and plan to build for street performance or moderate race use, then it can be a good, inexpensive option. But – and there’s a big “but” involved with this – first, you’ll need to find a block that is acceptable. A functional block needs to have thick enough walls for machining and should not have any internal (or external) cracks or stress fractures.

Many of today’s most popular engines were designed and built 50 years ago or more. Even the iconic small block Chevy 350 has been out of production since at least the mid-1970s. Many of the popular performance engines that have already been rebuilt once or twice are getting harder and harder to find. There’s still a strong demand for classic V8s such as the SBC, but not like it once was. There are newer engines that have found a place in the heart and soul of the hot rod market… i.e., Chevy LS, Ford Coyote 5.0L and Ecoboost V6s, Chrysler Hemis and even some imports. 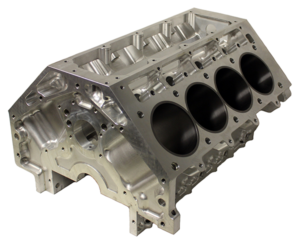 This is a billet block, commonly used for performance engines and lighter than cast iron blocks.

While there’s still a good supply of late-model engines in junkyards, the thin-wall castings are often cracked or worn out, making them only good for scrap. You would be lucky to find maybe two or three out of 10 that are rebuildable. More often than not, the lifter bores, main bores and cam bores are worn out beyond repair.

Finding a good core may not be difficult if you have a customer who is supplying a block that you know the history of and that has not been rebuilt multiple times. However, if the block is cracked and can’t be sleeved or is worn beyond the limit, a rebuildable core will be necessary to source from somewhere or you’ll need to go the new casting route. 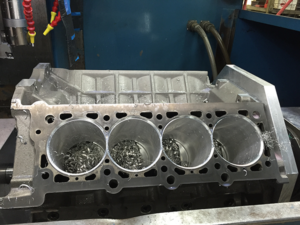 Several suppliers offer aftermarket blocks for SBC/BBC and SB Fords. These are the most popular options besides the LS series. LS engine have been growing in popularity due to their abundant supply of aftermarket parts and ability to adapt them to just about any application. The hot rodding community is nuts over these engines and many are going with an LS more often than the old tried and true SBC or BBC. Aftermarket blocks offer another advantage to a core in that they are available in aluminum or cast iron with standard or raised deck heights.

The block is often referred to as the foundation upon which everything else depends. You need a solid foundation to build the engine right – and the right block, whether it’s new or seasoned, will depend on the application.

Here are some popular aftermarket options (by no means the ONLY options – for more information, visit our interactive Online Buyers Guide at www.EngineBuilderMag.com).

Once known as the Motown Lite block from World Products, this redesigned and retooled block by Bill Mitchell Products is now better than ever. BMP’s SBC Aluminum Block comes with several noted features, such as stabilizing and reinforcing fins on the outside the block giving the cylinder walls more stability and enhanced cooling. These blocks also come with reinforcing ribs in the valley that connect the left and right banks that add the needed strength in the center of the block. The ribs are drilled to cross-feed the lifter as well. What’s more, the block is configured for priority main oiling to assure that the crankshaft is lubricated before the lifters. Standard fuel pump location and engine mounts for a drop in replacement.

World Products GM 8.1L block is a direct replacement style with all the OE fitments and accessory mounts. The 8.1L engine is no longer in production and until now there have been no direct replacement blocks available. These engines are common in trucks, motor homes, marine and industrial applications. World’s new digital inspection equipment and quality verification procedures ensure dimensional accuracy. ν

Advertisement
In this article:Engine Blocks