Inaugural Challenge Brings Out The Best in Competitors and Combinations

It may have been unseasonably warm in Charlotte, but engines (and builders) from around the country stayed cool under pressure as they were pushed to their limits in the inaugural Race Engine Challenge presented by VP Racing Fuels and Lubricants. 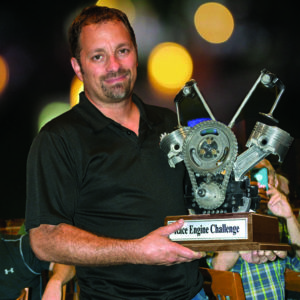 After multiple days of pulls, one engine stood tall and took home top prize – yet competitors agreed that everyone who participated was a champion.

“We knew when we announced the contest at last year’s PRI Show that engine builders were excited about the format and the chance to compete on an even playing field,” says contest coordinator Greg Finnican. “There was a lot of discussion on forums and between competitors and fans about what it takes to build a winning engine – we knew it would be really exciting when they were all on site, proving to their fellow engine builders and the rest of the world how good they really are.”

The Race Engine Challenge competition is the brainchild of Greg and Linda Finnican who wanted to support engine builders who enjoy the challenge of testing themselves and their engines on a dynamometer and under controlled test conditions. Rules were very straightforward and focused on American V8s for the inaugural event and delivered on the motto “by engine builders, for engine builders.”

The Race Engine Challenge was planned to give competitors a chance to prove their efforts and was a classic blend of people, parts, processes and power. The people side of the equation was fun to observe as team members and observer/attendees had a chance to network and enjoy the interface of others. Willingness to help each other was a common factor.

The contest was held in Charlotte, NC – a perfect location, as the city is right in the middle of race engine gearhead country, including NASCAR teams and engine shops of all stripes. Although testing racing engines on the same dyno was the goal, a quick tour of the parking lot at the engine dynamometer test facility told a lot about the competitors who gathered to compete for the top prize. Competitors came in from Virginia, North Carolina, South Carolina, Texas, Georgia, Kentucky, Michigan, Maine, New Hampshire, Maryland, Pennsylvania and other states, as well as Canada and Australia. The common language was the normal gearhead utterings and friendly challenges. 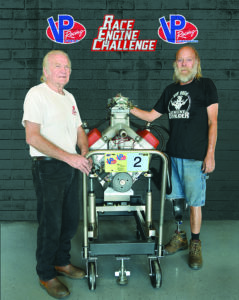 Title sponsor, VP Racing Fuels, supplied both the specified race gasoline and the appropriate lubrication for each contestant.

Testing criteria for the engines was under a controlled acceleration rate of 300 rpm/sec from 4,000 rpm to 7,500 rpm. The contestants were automatically scored by the SuperFlow dyno and averaged three tests for a final score. Although peak power played a part of the final score, the total area under the power curve was the key ingredient. The test data was corrected to a sea level standard of 29.92˝ Hg, 60 degrees F, dry air.

This correction scheme, called SAE J607 or sea level standard, has been in use for well over 60 years. No phony inertia factor corrections for each individual engine were used that have caused many problems of inequity in similar dyno testing contests in the past. Peaky power curves were not the key to success in this contest. Broad power curves with high average horsepower pretty much ruled the Race Engine Challenge.

Maximum power recorded was 810 CBHp (corrected brake horsepower) and the lowest peak power from the 13 separate engines was 584 CBHp. The engine displacements were varied and ranged from 372 cid to 488 cid and were in two basic group (inline and canted / hemi head) valve configurations.

Teams and interested visitors had opportunity to view dyno test data live on a large screen in a seating area close by where some technical presentations were given and spaced to fit while the teams exchanged engines or went through the thought process of tuning for the last tiny gains they sought. The technical presentations were yet another opportunity for the attendees to learn a bit more about engines and components.

Of course, the ultimate goal for any engine building professional is to maximize business opportunities. The dyno can be a great tool to study different combinations of parts and procedures to create the best engine for your customers’ needs. You’ll read more about the engines in the inaugural Race Engine Challenge during 2019 in the pages of Engine Builder. Many of the competitors have agreed to share detailed build specs with us so that you can duplicate (or improve on) their efforts.

The tuning and scoring phase (set by the rules) allowed for a maximum of 45 minutes to tune and run as many pulls on the dyno as considered necessary by the contestant. Then three runs were averaged for a final score. A couple of the contestants did all the required work by themselves while others had a team of folks in the dyno room performing well-practiced, choreographed dances of efficiency, which allowed time enough to even change the cam phasing to squeeze the last little bit of horsepower into the dyno system data.

Supplying a firm and steady hand at the SuperFlow dyno console and controls was Mark McKeown, expert operator for all the tests. Mark is from Maryland and was getting used to a brand new knee replacement as well as his dyno duties. 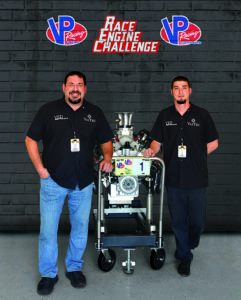 Derrick of Vaseleniuck Engine Development dedicated their efforts to his late Dad, Dave Vaseleniuck. VED had two entries and they did well in the competition.

One absolute surprise for this reporter was to see an old hardcore 488 cid Pontiac buzz up to above 7,500 rpm! That old school Chief yelled up a war whoop of 769 CBHp.

One entry was a Ford engine originally built by NASCAR great, the late Robert Yates back in the 1990s. Although changed from a dry sump to a wet sump to match the DRC rules, with upgraded pistons and a roller cam, it was certainly an old school-type approach and yet produced very good results. Unfortunately in teardown and inspection, the engine checked out just a tick over the 12.00:1 compression ratio limit in the rules. Not an intentional overreach by the builder, but a very good example of a need to always measure everything, as the tiny mistake was made by the piston manufacturer. That experience reinforced even to professional engine builders the “trust but verify” philosophy of those who are proverbial skeptics. The engine made 752 CBHp at 7,300 rpm. 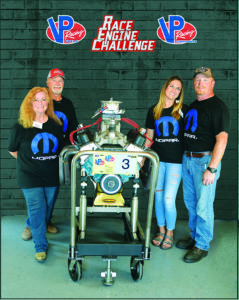 Team SSS from Indiana brought a 408 cid Mopar and had some problems but had lots of fun anyway. Corey Short is employed in aerospace and has a passion for gearhead things like this contest.

Awards were given out during a very nice banquet hosted by the contest organizers on Saturday evening after the final runoffs and teardowns were completed. The meal was good and the fellowship was superb. Each competitor got a “goodie bag” of items from the many sponsoring companies and the top finishers in the contest got considerable additional rewards. To say that a good time was had by all is putting it mildly.

The award for first place overall went to Greg Brown of Hammerhead Performance Engines, Snellville, GA. The large trophy, created by Ray Banyas of Victory Engines in Cleveland, OH is a perpetual rotating trophy to subsequent Race Engine Challenge winners. The winning Hemi head 393 cid Ford used the specialty Hemi heads that Hammerheads is becoming quite famous for. Peak power generated was 769 CBHp and 7,500 rpm and a final score of 1,610 points.

The inline valve side was won by Jack Barna’s small block Mopar scoring 1,549 while putting up a peak power of 737 CBHp at 7,500 rpm. Only one point separated the first and second places of inline valve engines – Vaseleniuck Engine Development’s entry was a 404 cid Oldsmobile run by Bill Ross with a peak power number of 717.5 CBHp at 7,100 rpm and a score of 1,548 points competing in the inline side of the contest.

You can see how tight much of the dyno racing was.

A Canadian team (Raceheads and Dyno Geeks) featuring Carlo Aghbashian and Stéphan Monette placed second overall with their 400 cid Gen III Hemi that blasted out 752 CBHp at 7,100 rpm and yielded a score of 1,582.3.

Another Vaseleniuck Engine Development entry on the canted valve configuration side of the contest scored 1,554.2 points from a 426 cid SB2 with 810 CBHp at 7,100 rpm.

Dale Robinson, from Canada, was recognized for his sportsmanship and willingness to help others. His Batten-headed Oldsmobile engine made 584 CBHp at 7,100 rpm and scored 1,322.1 points.

One Mopar engine entry was suspected to be hurt and did not run its best even though it put numbers on the board without full tuning and only produced three runs. One competitor withdrew from the competition after producing some very good numbers. Other than a few minor hiccups, the inaugural contest went off without any hitches.

Helping hands for dyno to engine  connection was provided by Tom Green and Mike Sciame and they stayed busy. The competitors also helped their fellow competitors to get on and off the carts so the testing went smoothly.

During the several days of the contest, some technical presentations were given when engines were not being run on various subjects that included:

A press conference announcing rules updates for the 2019 Race Engine Challenge will be held during the PRI Show on Friday, December 7 at 11 am in the Media Center at the Indianapolis Convention Center. Come learn more about the program and how you can participate next year.