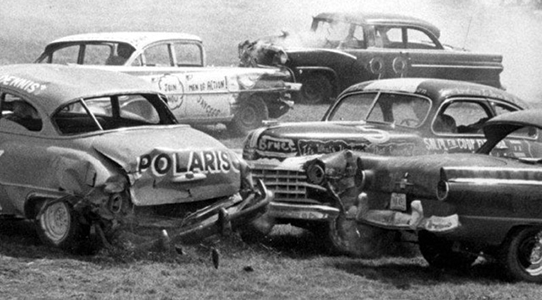 I grew up in a small town of 5,000 people. Each year on Saturday night at the county fair they would have a demolition derby. The local salvage yard would always hold cars back during the year that were good derby car candidates, knowing that two months before the fair, the locals would come shopping for a demo project car.

It was first-come, first-serve. Not much money was spent on these cars – simply strip out the windows and interior, strap in a five-gallon metal boat gas can into the back seat and the cars were pretty much ready to go. It was all in fun and the winner might take home $100!

Something Funny Happened on the Way to the Fairgrounds

Demolition derbies used to be simple and inexpensive. Times have changed! Winners don’t just drive an old junker out expecting to win. Somewhere along the way, this demo derby business got serious!

As an example…the car pictured below started out as a mid-1990s Ford Crown Victoria. “Crown Vics” are in big demand in the derby world due in part to their strong frame. Of course, some years are better than others and knowing the difference is a well-kept secret.

As for the original engine and transmission in the Crown Vic, that won’t get used, nor will the rear end. They will all be replaced by “built” units. 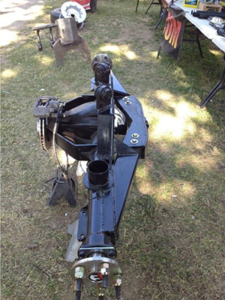 Speaking of “built,” let’s start with the engine. Small block Chevy engines are popular for a number of obvious reasons, including cost and aftermarket parts supply. A “seasoned” block is preferred, meaning customers will rebuild an engine that has already been through a few seasons of demo derbies.

It is not uncommon for them to spend $6,000 or more (sometimes much more) for an engine. You would expect them to protect that investment, and they do. Thisshows the engine/transmission cradle that will eventually be mounted to the modified Crown Vic frame. 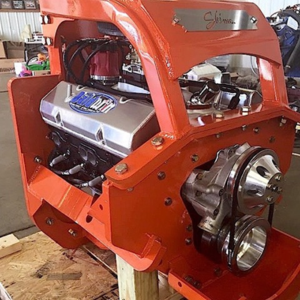 Transmissions are beefed up with heavy-duty racing clutches and cooled by dry ice, and that is just the beginning. As you might expect, the rear ends are also built units that are modified, including a modification that keeps the axle in the housing if it breaks. 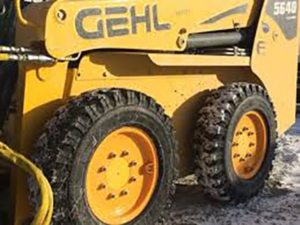 The tires used in competition have 12-ply sidewall rating to resist puncture and are usually found on skid steers. The rims are specially built with ¾” thick centers to resist bending and cracking, and are drilled for multiple bolt patterns. The outside of the rim forms a continuous bead lock. 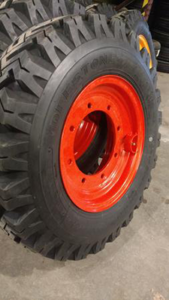 I have figured out it is easier to understand the professional demo derby world if you understand the terms associated with the sport. Here are a few of the most common terms courtesy of we-crash.com. It is the go-to website for the pros and those aspiring to become pros. These guys are serious about what they do. Meanwhile, your derby technical education starts now…just in time to be ready for next summer’s customer requests.

Body Creasing – The technique of strengthening the car by hammering the sheet metal with a combination of a sledgehammer, mini sledge and, most of all, a ball peen hammer. This is said to structurally strengthen the sheet metal itself, and also forms the body so that it will crumple in on itself during impact, making it a hard, tight ball of steel once packed in. Getting hit will actually make the car stronger. (See the example of the Crown Vic to the left)

Chained Humps – Running a heavy chain between the frame rails behind the axle so that the frame rails do not bend outward upon impact, which could cause damage to the tires, slowing the car down.

Also, it can mean to run a chain vertically from the rear end to the frame rails to keep the rear end from “tee peeing” upwards on a leaf suspension rear end car.

Pinning the Frame – A method of strengthening the frame in which a series of one-inch holes are drilled through the frame, a steel rod is inserted, and welded to the inside and top/bottom of the frame, then ground smooth to hide the modification. This is considered a form of cheating but is often difficult to detect.

Sedagon – What you get when you collapse the roof of a station wagon flat in order to make the car appear as a sedan. Station wagons are typically much stronger than a sedan and contain extra frame cross members from the factory.

Slider Driveshaft – A custom-built driveshaft with two long tube-like pieces of steel, one inside of the other (male/female), that has the ability to shorten or lengthen (telescope). As the car’s frame bends at strange angles, it allows the driver to still keep power to his rear axle; otherwise a stock drive shaft would slide out of the transmission or rear axle.

Stuffing Frames – The practice of filling voids in a car frame or bumpers with heavy materials to give additional strength. This practice is also considered cheating, and if caught, you most likely will not be allowed to run.

Stuffing Shocks – Drilling and draining the fluid and filling the void with cut up pieces of rags or steel shot (BBs) to gain height. Also stuffing rags into the shock skirt to act as a bump stop that protects the valve stem of a tire or tube from damage. Valve stems are usually located on the inside of the rim to protect them from damage.

“5 On–5 Off” – This term describes a pattern of how to weld plates over door, trunk and hatch seams. Plates up to 5˝ long welded over the seam, a gap of 5˝, and then another plate 5˝ long. They are used to close the body panel and provide extra strength.

There are rules for every class and those rules are pretty clear concerning what you can and can’t modify. All cars are carefully inspected before they are allowed to compete.

The inspectors are often current or past participants themselves so they know where to look for illegal modifications. If you are from “out of town” you can expect extra attention from the inspectors.

If you have been caught cheating in the past it is almost a 100 percent guarantee they will go over your car with a fine tooth comb. It is not uncommon to see four or more inspectors on a car for over an hour.

It should be clear to you by now that these guys are serious competitors. As such, they could easily become great customers. They need machine work as well as engine and transmission building services.

You might do well to go to one of these professional events and walk thru the pits and introduce yourself. Chances are you will get quite an education as I did, and maybe gather up a few new customers in the process.