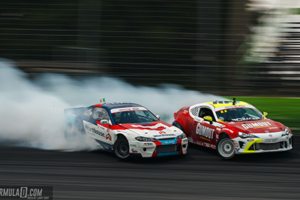 When drifting first started popping up in the United States, there was a lot of debate as to what it was and whether it could be considered racing. In Japan, where drifting was invented, the legitimacy of the sport has never been in doubt.

Sometime in the mid-’80s, on a twisty mountain road in Japan, a young Keiichi Tsuchiya drifted in his trademark Toyota AE86 (Corolla in the U.S.) on film for one of the first videos about drifting. The sport was popular in the ’70s among street racers, but didn’t get international attention until that video was released and began to circulate to other racers.

The growth of drifting is due, in part, to the vast combinations of cars and engines that compete in events from grassroots club competitions to the professional ranks with big-time sponsors. It’s also one of the last frontiers for wide open engine rules, and that should be music to engine builders’ ears.

Formula Drift has been in America since 2003 after an exhibition match with Japanese D1 Grand Prix drivers at Irwindale Raceway in California. Since then, the sport has continued to grow and add new fans in the 15 years it has been running in the U.S.

FD is the first drift series to compete with a full field of 32 cars in an 8-round championship. The wide variety of cars that run the series are surprisingly all competitive — with everything from a rotary-powered Miata to an LS-­swapped Nissan 240SX to a twin-­supercharged V12 Ferrari 599 with 900 horsepower.

If you’ve never seen drifting, it is bold and brash and full of energy, noise, music and not to be missed, smoking tires and sideways cars. It’s a young sport, with fans that love what they see. Today, there are a growing number of local events held at tracks throughout the country from parking lots to full-size road courses and oval tracks. 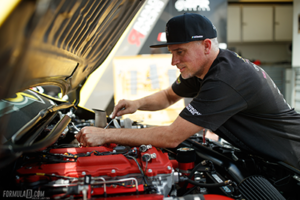 Drifting competitions became folklore in Japan during the ’70s, with the techniques of a master driver who soon spread his teachings to street racers of the day. Today, drifting has a worldwide presence for its unique, judged competitions that are akin to figure skating with factors such as speed, angle, showmanship and racing line being part of the equation for winning a run. The desired line is usually whatever the judges deem important for points. Certain areas highlighted by the judge such as clipping zones, clipping points and touch and go areas earn the driver points that tally up similar to a boxing match.

Keiichi Tsuchiya, known as the “Drift King” became particularly interested in Takahashi’s drift techniques. Tsuchiya began practicing his drifting skills on the mountain roads of Japan, and quickly gained a reputation amongst the racing crowd. In 1987, several enthusiast magazines and tuner shops helped to produce a video of Tsuchiya’s drifting skills. The video, known as Pluspy, became a hit and inspired many of the professional drifting drivers of today.

The attraction of drifting for both racers and fans is not only the cars, but the engines and lack of restrictions to do whatever you want. Because the competitions are not about speed alone, it’s important to gain style points, ala freestyle snowboarding.

While many engines can be suited well for drifting, the following are the most popular mills, according to the website DriveTribe:

While many drift racers compete with import vehicles (and engines), there is a growing number running V8-powered Mustangs, Corvettes and Camaros or V8-swapped cars. If the car has a front mounted engine and rear wheel drive, it’s a potential drifting machine. In some cases, such as the Toyota Corolla built by Papadakis Racing, they have modified a front wheel drive Corolla to a rear wheel drive configuration and run one of the most radical twin turbos on the Formula Drift circuit. It has 1,000 nitrous-boosted horsepower from a four-cylinder Toyota 2AR engine.

In the newest rulebook for Formula Drift, most of the changes were to the section on the drivetrain. But before you assume that there’s a long list of displacement specs and rpm limits, think again. Most of their changes are “recommendations” not exactly a strict rule. For instance, under the Engine section, a rule was added for skid plates: “Skid plates are allowed for the protection of associated engine components such as lines for oil, cooling and fuel. Skid plates shall cover the minimal area needed for the protection of those components. Metallic skid plates shall be made up of a maximum thickness of .125˝ steel or .1875˝ aluminum.” 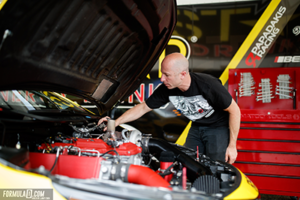 The Cooling System update is one of the only rule changes that sounds like a real rule:  “All engine components and exterior components that support engine operation such as coolers, pumps, tanks, and lines must be protected and within the confines of the factory frame rails and factory bumper or tubular bumper structure.”

Transmissions must be manual with a manual clutch release operated by driver’s foot. Automatic transmissions are prohibited, and the rules make clear that no electronic or hydraulic shifting is allowed: “Each individual shift must be a function of the driver and controlled manually.” 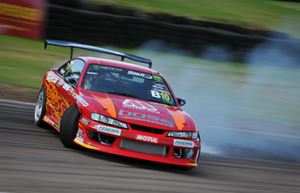 Drifting, by nature, is a shock to the drivetrain because you have to induce oversteer rather violently through clutching and handbraking. No matter how good the car is built, teams are continually breaking parts. However, a well-built car, a good driver and a lot of maintenance can usually be a winning combo.

In a typical race series, turbos would be balanced against naturally-aspirated cars. Fuel would be restricted. There are rules about how to modify your car, but they’re either for safety or to keep cars from becoming too custom, too far from the production base model. The only thing that keeps cars even on performance is based on weight and tires. The cars are kept in weight classes with big tires allowed for only the heaviest cars, smaller ones approved for the lighter cars. You can’t go to a bigger tire without a weight penalty. The weight/tire balance is meant to keep the racing close, so no one builds a super-light car with big tires and walks away from the field. 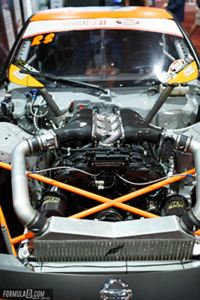 Drifting, by nature, is a shock to the drivetrain because you have to induce oversteer rather violently through clutching and handbraking. No matter how good the car is built, teams are continually breaking parts. However, a well-built car, a good driver and a lot of maintenance can usually be a winning combo.

The fifth generation AE86 series Toyota Corolla with its front-engine/rear-drive configuration was sold from 1983 to 1987 in coupe and hatchback configurations. The cars were light, affordable, easily modifiable and combined a five-speed manual transmission, an optional limited-slip differential, MacPherson strut front suspension, high revving (7,800 rpm), twin-cam engine with an external oil cooler, near 50/50 front/rear weight balance, and an all-important front-engine/rear-drive layout – at a time when this configuration was waning industry-wide.

The many desired attributes of the AE86 made it a popular platform for club racing and rallying, which naturally lead to being set up for drifting. Road & Track called the AE86 “a cult icon, inextricably interwoven with the earliest days of drifting.” The latest iteration of the AE86 is a 2+2 sports car jointly developed by Toyota and Subaru, manufactured by Subaru and marketed as the Toyota GT86, Toyota FT86, Scion FR-S and Subaru BRZ.