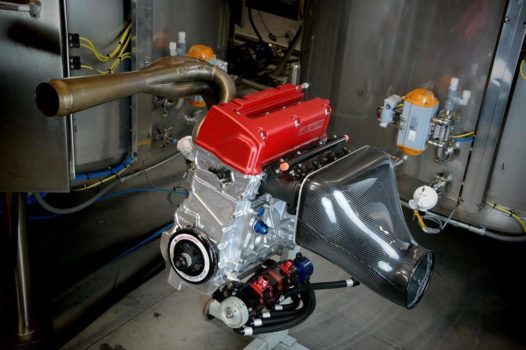 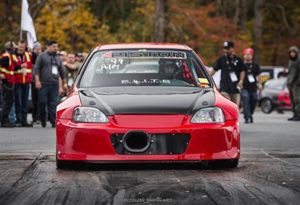 It’s been almost 20 years since the first of the many “Fast and Furious” films entered the public eye, leading to a renaissance for the sport compact car and engine market. That market has ebbed and flowed in the years since, but thanks to a resurgence of smaller displacement engines and turbocharging becoming mainstream today, the sport compact market has returned to the limelight. Is your shop getting a piece of the growing pie?

“It’s the age of the turbocharger right now – not just with import stuff – now you have all the Ford EcoBoost four cylinders and every car company making a turbocharged four cylinder and six cylinder engine,” says Luke Wilson, owner of 4 Piston Cylinder Heads in Danville, IN. “With all of this turbo stuff going on, the sport compact market is only going to grow. It’s more relatable to what people have in their cars. You see big events like NASCAR and NHRA losing their spectator base because people want to go watch races that are more relatable to the cars they drive every day. A lot of that is going to be four and six cylinder turbocharged cars now from every manufacturer. I can only see the market growing.” 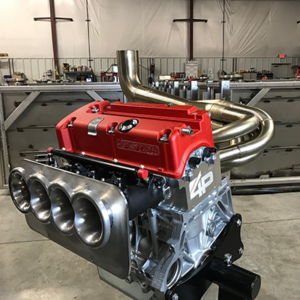 The growth of the market is directly reflected in 4 Piston Cylinder Heads’ growth as well. The 7-employee shop, which opened in 2000, focuses on cylinder head development and sport compact engine building with a heavy emphasis on Honda, but will also build Mitsubishi Evos, Nissan GT-Rs and some Ford EcoBoosts. The shop started as a way for Wilson and Josh Klein to better afford to go racing. The duo also wanted to deliver a better quality product to the market.

“The market was flooded with low end products,” Wilson says. “The reality is customers want a higher end, boutique product. There’s a whole customer base out there that wants quality and not just the cheapest product. So we just grew and grew and kept putting out a good product and got into more engine development, and over time, that snowballed.”

4 Piston Cylinder Heads started in a garage. As the business grew and the market grew, so did the shop’s facility. This year, 4 Piston plans to add 12,000 sq.-ft. to its current building.

“When we were kids, our parents didn’t buy us Corvettes,” he says. “Instead, we got Honda Civics. So that’s what we started playing with. As we got older, we saw how much of a motorsports following Honda has worldwide. It’s a pretty sizable market. The Mitsubishi Evo stuff is only a limited number of cars and they’re now out of production. The last time I looked, Nissan had sold 9,000 GT-Rs, which isn’t that much. However, if you look at turbocharged Honda Civics, you’re talking about a couple million people. Those are just the people who are performance minded – that’s not all the people who are buying those cars. They’ve sold tens of millions of cars. So the other markets are pretty small.

“The Ford EcoBoost market is getting bigger and it’s going to keep getting bigger. That’s a good one. I would say that Ford is going to end up being one of the bigger four cylinder markets as long as they don’t change that.”

The draw to sport compact is the availability of the cars and engines all over the globe. Most people don’t have the budget to buy a performance car and then dump another small fortune into modifying it for racing. A lot of people are buying entry-level, four-cylinder cars and then putting money into making those vehicles race cars.

“In the past two years, we’ve been filling a void,” Wilson says. “Our initial idea behind the whole business was to just do cylinder heads and supply them to the end user and supply them to the engine builder. As that evolved, we started building more engines because there’s a big need. There’s not a lot of high-quality, sport compact engine builders.” 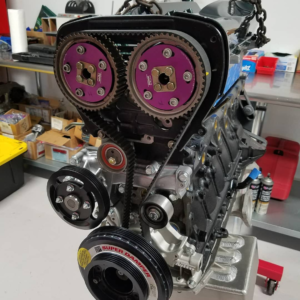 The first year 4 Piston started building engines, the shop completed about 30 builds. Last year, the shop did 160 engines, and this year, Wilson estimates they’ll do 200.

Another shop getting in on the growth of the sport compact market and focusing on high-end builds is Axiom Race Engines in Houston. Co-owner Mike Cogburn opened his engine shop just two years ago, but immediately saw the benefit to working on sport compact engines. 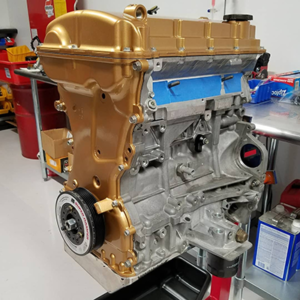 “We work on a lot of the inline six Nissans – the RB26 engine seems to be continuing to grow and be more popular with more of the R32 GT-R Skylines coming here to the States from Japan,” Cogburn says. “With those being legal now, it seems that whole craze with everybody wanting to modify and rebuild and make a bunch of power isn’t going to go away. The more cars that are here in the U.S. hitting the streets means an evolution of that platform. The U.S. now is kind of seeing that flood of people wanting to do those things.”

Cogburn admits that the Skyline craze isn’t on the scale of the 2JZ or the Supra, which he believes is one of the most popular inline sixes, but the RB Nissan stuff is slowly but surely growing and he doesn’t foresee it going away for a long time.

“It’s not anywhere near the size of the domestic side, for obvious reasons, but the sport compact market has some big name shops and smaller shops that put out great work,” Cogburn says.

While there are plenty of shops doing great things in the sport compact market, Cogburn says the customers of sport compact builds request very different goals from those wanting domestic builds.

“There is some variation from the sport compact side to the domestic side as far as where the customer’s mindset is at,” he says. The biggest one I see that I fight constantly with the sport compact side is the guy who wants his engine built with a new crankshaft, forged rods and forged pistons, but he wants to do nothing to the cylinder head. 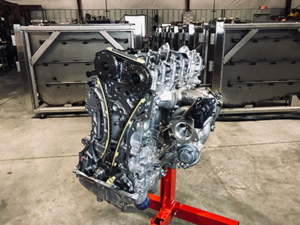 The K20C1 is the newest engine from Honda. It is a direct injected turbocharged 2.0L engine that produces 306 hp and 295 lb.-ft. of torque. This engine is not only being utilized in on-road Honda Civics, but also purpose-built race cars. This includes F4 and F3 feeder series for the climb to Indy Car, British Touring car, IMSA TCR Civic Type R, and many other forms of endurance racing. The guys at 4 Piston Cylinder Heads make these engines stronger and set them up for higher output. The stock turbo can produce 400 lb.-ft. of torque at low rpm and over 400 hp! Photo courtesy of 4 Piston Cylinder Heads.

“That’s the complete opposite of the spectrum of what the domestic guy sees. The domestic guy will bring in an LS and we’re doing the heads, the induction and the camshaft so the vehicle can make more power and get to the customer’s goals. That’s the biggest struggle we have with the sport compact side is convincing them to save their money and put more money into the cylinder head side where you’re going to see the most benefit.”

Wilson and his team at 4 Piston specializes in cylinder head development, but that doesn’t mean they don’t get their fair share of crazy customer goals.

“Most of the projects are people sending a stock engine in, whether it’s got 30,000 miles on it or 300,000 miles on it, and they want to turn it into something that’s ridiculous,” Wilson says. “We’re taking an engine that made 170 horsepower – a lot of our customers want to make between 700 hp and 1,000 hp. It’s not usable. Seven-hundred is usable on the street, but 1,000 hp is not. But people shoot for that. 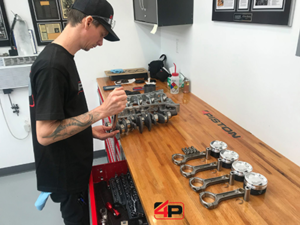 “For ones that are turbocharged, it’s rare for us to build a turbocharged engine that’s less than 600 or 700 horsepower. The dedicated drag race cars are in the 1,200 to 1,500 horsepower range. The road race engines are 900 to 1,000 horsepower. It’s all getting kind of crazy.” 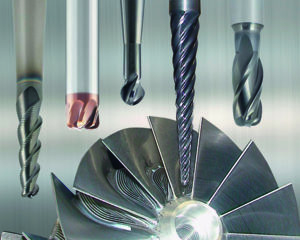 Wilson also mentioned Honda has a large naturally aspirated following, which none of the other four cylinders have.

“We can make over 300 hp on a pretty basic engine on pump gas,” he says. “For the drag race stuff naturally aspirated, we make around 500 hp. There’s a lot of racing series around the world that have naturally aspirated displacement, limited class racing.”

No matter what your shop’s current focus is, you may want to take note of the sport compact market. It’s growing. It has a large following. It’s getting bigger in racing circles. But most importantly, it could mean more profit by taking on these customers and their engine builds. 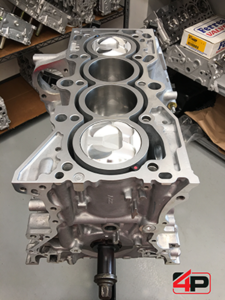 “The sport compact guys used to be off in the shadows while the domestic guys were in the limelight,” Cogburn says. “It seems the sport compact community is catching on and becoming more public now than it used to be. I don’t see it going away. I just see it continuing to grow.” ν