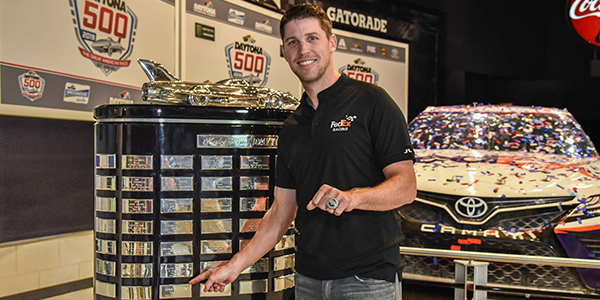 Hamlin was joined by his car owner Joe Gibbs and his first-year crew chief Chris Gabehart. Gibbs now has three DAYTONA 500 championships as an owner; Hamlin also won in 2016 and in 1993, Dale Jarrett gave Gibbs his first victory in NASCAR’s biggest event.

“This is certainly validating, for sure,” Hamlin said. “But there’s certainly a lot I want to accomplish and I have plenty of time to do it.”

The post-race celebration Sunday night was significant – but subdued. The team went to a local Steak ’n Shake, continuing a team tradition that started in 1993 when Jarrett’s victory was also the first overall for Joe Gibbs Racing (JGR) in the Monster Energy NASCAR Cup Series. And once again, they were noticed and joined by a number of race fans.

Monday’s levity contrasted with the emotion so prevalent on Sunday. For JGR, this year’s DAYTONA 500 was a tribute – win or lose – to the late J.D. Gibbs, Joe Gibbs’ son who passed away last month to a neurological disorder. J.D. Gibbs was the individual who brought a young, untested Hamlin into the JGR organization.

In addition to a press conference and a number of one-on-one media interviews on Monday morning, Hamlin also said goodbye to his winning car for a year. His No. 11 FedEx Express Toyota Camry began a one-year, fan-friendly display on Monday – complete with confetti from Sunday night’s Gatorade Victory Lane celebration – in the DIS Ticket and Tours Building.

Wile and Hamlin also unveiled the new logo for the 2020 DAYTONA 500, scheduled for Feb. 16. And on Sunday night after his victory, Hamlin placed one foot and both hands in cement and signed his name on the square that will be added to the DAYTONA 500 Champions’ Walk of Fame outside the Ticket and Tours Building.

Monday’s breakfast included interviews with local and national media outlets, but Hamlin’s championship visibility was just cranking up. Tuesday, he will head to New York for interviews on FS1, Live! With Kelly and Ryan plus SiriusXM, among others. He will then visit the New York Stock Exchange to ring the closing bell.

On Thursday and Friday – in advance of this weekend’s Monster Energy Series event at Atlanta Motor Speedway, Hamlin will visit a variety of Atlanta-based media outlets.