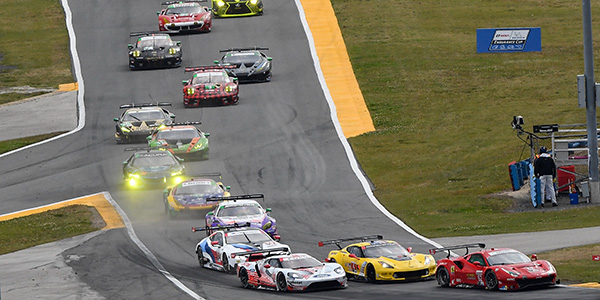 Whether the race is based on time (24 hours, 12 hours, 6 hours) or distance (500 miles, 1000 kilometers), endurance racing events remain a unique challenge in motorsports. It is the ultimate test of man and machine, with engine durability playing a substantial role.

Survival of the Fittest

Durability is one of the most important factors for automotive giants to prove to their customers when it comes to building vehicles. Naturally, the debate over who had the most durable (and fastest) machine led to a race. Someone wise once said that ever since the second car was built, a race was about to happen.

In 1901, Mercedes built a 35 hp beast. It was the fastest production car at the time, reaching speeds of 36 mph. It was essentially the first sports car built for racing. But let’s keep in mind what cars were like around the turn of the 20th century – they were almost light years apart from cars at the turn of the 21st century! Today, production-based racecars can reach speeds over 200 mph with close to 1,000 hp, and stay together for 24 hours!

Whether the race is based on time (24 hours, 12 hours, 6 hours) or distance (500 miles, 1000 kilometers), endurance racing events remain a unique challenge in motorsports. It is the ultimate test of man and machine, with engine durability playing a substantial role. 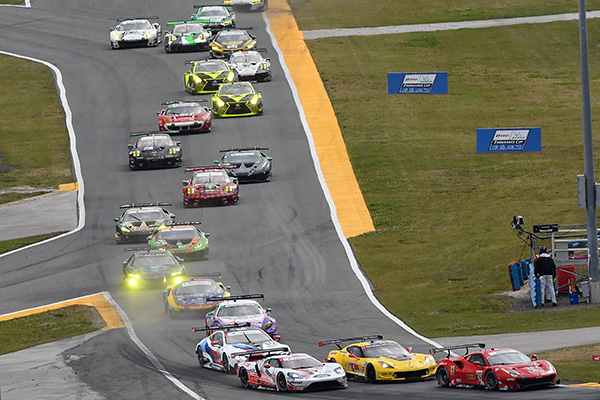 Whether the endurance racing is based on time or distance, these events remain a unique challenge in motorsports. It is the ultimate test of man, machine and engine durability.

Fernando Alonso, the winner of the most recent Rolex 24 Hours of Daytona, said in his post-race interview that he just had to survive the 24 hours due to the conditions that went from sunshine to torrential rain. The race was stopped two hours short of the 24 hour timed distance.

“You had to survive every lap,” he noted in a post-race interview. “It wasn’t a matter of lap times or anything like that. It was a matter of crossing the line, putting the lap together and at the end, it worked.”

Endurance racing is about survival, and being the first one to survive the distance. Traditionally, long-distance racing has been about running just hard enough to make it. Drivers would save their equipment and be careful not to over-rev the engine, miss shifts, lock up the tires or go off the track and cause damage. Mechanical engine failure is just as likely to happen as an accident on the track when you’re running at the edge for several hours. At least, that was the line of thinking until more recently – now 24-hour races have become a series of short sprint races, with each driver going as fast as possible to keep up with or outpace their rivals. Staying on the lead lap is crucial in these events. Running this strategy puts a premium on the quality of the engine build.

There are only a handful of engine builders involved in endurance racing at the highest levels such as IMSA, WEC and others. But that doesn’t mean there aren’t any opportunities to get involved, especially in sports car racing as a whole, since not all classes race endurance events more than two hours. Racing around the clock is very expensive when you add up the time the car is on track with the amount of crew, tires, fuel and parts needed to support the team.

In professional racing, IMSA is considered a bargain for teams and manufacturers looking to gain the most “bang for the buck.” Costs are estimated to be between $3-$6 million per entry in the WeatherTech series, but it depends on which class the team runs. The GT classes are broken down into two: GTLM, which means they are running to Le Mans rules; and GTD, which stands for GT Daytona. This class has to have a pro driver and an amateur driver as part of the team. The rules are slightly different in that GTD is also allowed to run ABS brakes but GTLM is not. GTD is also known as GT3 in international racing. The manufacturer builds the cars to racing specifications, including the engine.

The GTD lineup includes many of the top brands and homologated models such as Acura NSX, Audi R8, BMW M6, Ferrari 488, Lamborghini Huracán, Lexus RC F, Mercedes-AMG GT and Porsche 911. Different versions of the BMW, Ferrari and Porsche also race in the GTLM class, with the likes of top domestic brands Chevrolet Corvette and Ford GT.

Multiple manufacturers offer GT3 homologated cars because they are far less expensive (relative to the other classes). One GT3 team owner said that tires cost half as much as tires for a GTLM team. For drivers with deep enough pockets, this is a very alluring category because they can race exotic sports cars on the best tracks in the world. While the manufacturers build most of the engines, their performance divisions such as TRD, HPD and others “tune” the engines for racing. However, there are some areas where a performance engine shop may work into the mix. It’s all about the connections you may have in the sport. 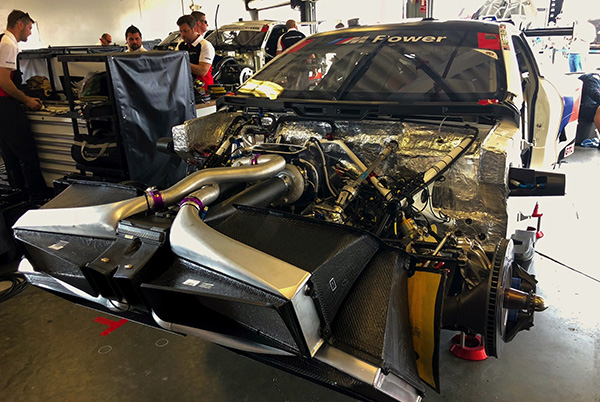 Endurance racing series come in all shapes and sizes, so-to-speak. The various series available offer opportunities for all kinds of different manufacturers to get involved. Pictured is a BMW M8 GTE. BMW participates in numerous endurance series.

With three sports/touring car focused classes, World Challenge offers ample opportunities for engine builders to get involved. The Blancpain GT World Challenge is one of the top series for GT3 cars in North America heading into 2019. The GT4 America championship runs GT4 homologated racecars in two race formats – Sprint and SprintX (shorter distance than traditional endurance events). The GT4 category has a wide range of cars that are eligible to race including the BMW M4 GT4, Chevy Camaro GT4.R, Audi R8 LMS GT4, Ford Mustang GT4, and the Mercedes-AMG GT4. Other GT4 cars are the Porsche Cayman GT4 CS MR, McLaren 570S GT4, and Panoz Avezzano GT4. World Challenge also has a category for touring cars. The new TC America championship features three classes – TCR, TC and TCA. TCR has garnered a lot of attention for its globally homologated racecars, but TC and TCA feature a mixture of manufacturer-built and shop-built racecars.

The ChampCar series  (formerly known as ChumpCar) race events range anywhere from seven to 24 hours. The series is very budget restricted but there are some swapped engines.  Teams need a minimum of two drivers for most events and a couple of crew guys for pit stops. The series uses a points-based system to balance the performance of the cars. Each make/model is assigned a specific point value. Performance items such as shocks, springs, engine modifications and more are assigned additional points. A car’s total point value cannot exceed 500 points. According to ChampCar, this point-based system helps to control the cost required for a team to go racing. Swapping engines and drivetrains are allowed, but the points can add up quickly.

The Corvette C7.R uses the same 5.5L V8 that was in the C6.R’s successful run at Le Mans and in the American Le Mans Series (ALMS), which is now part of IMSA.  The supercharged LT4 small-block V8 from the Z06 Corvette has more power than the current small-block, but rules state that the engine has to be de-tuned to 5.5L for parity within the series. The folks at Chevy thought that the time and expense to modify the LT4 was not feasible, especially since they already had a consistent winner with the 5.5L program.

Chevrolet’s Senior Manager of Performance and Racing Engines, Russ O’Blenes, told Corvsport.com that IMSA manages performance between manufacturers through restrictors and displacement. The supercharged LT4 in the Z06 makes more than 100hp over the current GTLM cars, which is why they stuck with what they had. The Chevy team added direct fuel injection to the C7.R, which improved throttle control and gave a noticeable fuel economy boost – big enough to eliminate a pit stop during a 24-hour race.

Cadillac’s 6.2L V8 engine has been very consistent in delivering power and reliability to the three prototype race cars. The race-prepped 6.2L V8 engine, which shares architecture with the 6.2L V8s in the CTS-V and the Escalade, is naturally aspirated and produces about 600 horsepower at the maximum allowable 7,600 rpm with series-mandated air restrictors. All of the Cadillac race engines are modified, built and maintained by ECR Engines. The Cadillac V8 is also a semi-stressed member of the chassis that takes some of the load and acts sort of like the spine for the carbon fiber monocoque. 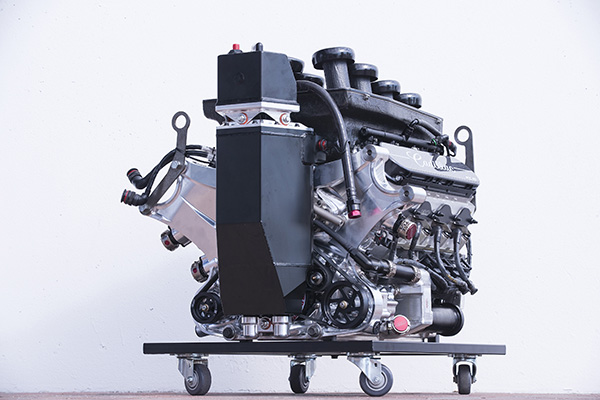 The race-prepped Cadillac 6.2L V-8 engine, which shares inherent architecture with the Cadillac 6.2L V8 engines in the Cadillac CTS-V super sedan and the Cadillac Escalade prestige SUV, is naturally aspirated and outputs near 600hp at a maximum allowable 7,600 rpm with the series-mandated air restrictors in place.

Roush-Yates Engines and Ford Performance teamed up to develop the optimal performance package for the twin-turbo EcoBoost V6 by focusing on four key attributes: power, reliability, fuel economy and weight.

Analyzing the various ways these four elements interact inspired the team to create the piece of the art that powers the Ford GT supercar. The engineering and assembly teams have pushed beyond the limits to develop and execute innovative manufacturing processes. The engine was initially based off the Ford EcoBoost Daytona Prototype race engine and then modified for the Ford GT. A team of Roush Yates Engines’ engineers and calibration engineers support the teams trackside. These team members are electronic calibration experts and are focused on optimizing engine and fuel mapping, developing traction control and paddle shifting strategies based on real-world race data.

RYRE boosted the performance of the stock EcoBoost by 40 percent, and have tested the engine at close to 1,000 hp on the dyno. They’ve also run more than 14,000 simulated miles of durability testing. IMSA rules restrict engines to about 600 hp, so RYRE uses 33.2mm restrictor plates fitted before each turbo to detune the engine. Chip Ganassi Racing, who runs the factory Ford GT teams, is said to have simulated a 30-hour race at Daytona, so there is plenty of performance margin built into the engines.

Some endurance categories can also be limited to “spec cars” (same make, engine and chassis, or a combination thereof). LMP2 class is a good example of a spec engine class with multiple chassis manufacturers. All teams in LMP2 must run the 4.2L engine developed by Gibson Technology. The GK428 is a 90 degree V8 that produces 410 ft-lb of torque and 600 hp. For obvious reasons, this class doesn’t present any opportunities for outside engine builders. Gibson, like other manufacturers, build and maintain all of their engines.

According to Autoweek’s Steven Cole Smith, sports car racing is the best it has ever been in the U.S. right now. Smith said that in talking to IMSA president Scott Atherton, he wouldn’t want to trade places with any other racing series that is currently running. While other series are looking flat to down, sports cars are on the uptick.

Building engines for sports car teams may not be the biggest niche market in racing, but if you have experience working on the latest exotic sports car engines, there’s a good chance you can make headway into this segment for a very, very long time.