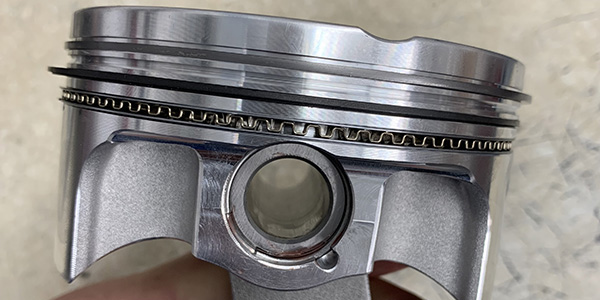 While piston materials and designs have evolved over the years to compensate for higher pressures and heat expansion, selecting a piston that is optimized for combustion chamber conditions can be challenging because there are so many variables to consider.

The basic design of the piston and ring is pretty much the same as it was when the first internal combustion engine was invented. The piston is still a round slug of metal that slides up and down in the cylinder. And the rings are still used to seal compression, minimize combustion blowby and control oil.

Despite similarities to earlier counterparts, piston design has become a very complicated process where even the shape is painstakingly plotted out on a computer modeling program known as Finite Element Analysis (FEA). Pistons are also not really round these days. Many are specifically designed to be an elliptical shape when cold that expands to a round shape as the engines warms up to operating temperature. However, the force caused by the combustion process puts most of the initial pressure on the piston crown area as the flame front expands.

For piston rings, the trend is continuing towards thinner width, steel rings with advanced face coatings. While not directly due to direct injection and forced induction, the face coatings for piston rings continue to evolve to meet the high demands of these engines. Typically any new engine on the market today utilizes steel for all the rings as well as some type of physical vapor deposition (PVD) coating. 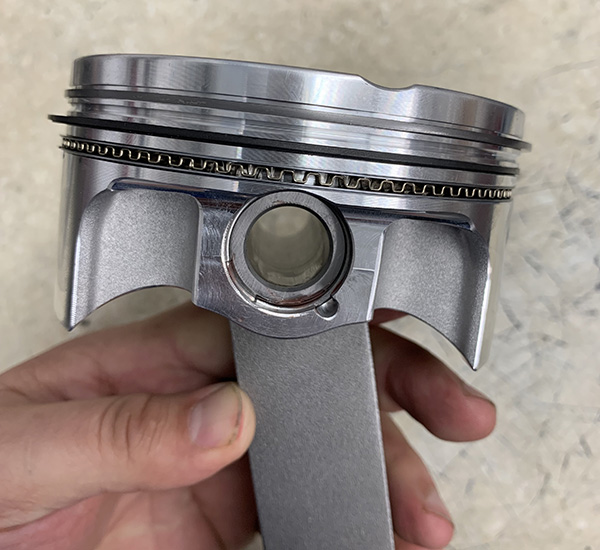 While piston materials and designs have evolved over the years to compensate for higher pressures and heat expansion, selecting a piston that is optimized for combustion chamber conditions can be challenging because there are so many variables to consider. Engine builders must consider the type of material, the manufacturing process whether forged, cast or billet, the ring pack, including coatings, cost, and so on. Forged pistons offer the highest strength and durability, but they may not be the best choice for every application even if they are available. Billet designs offer flexibility as far as design and more flexibility for sizing, but they are also more expensive to produce due to the amount of machining that is necessary to cut an aluminum plug into a useable part. Cast pistons are made in high quantities but are not as strong as those made from billet or forgings. It is ultimately up to engine builders to determine the best combination for the customer.

Turbocharging smaller engines is the trend that the OEMs are following these days, which allows smaller more fuel efficient engines to have similar power to their bigger displacement cousins, but it also increases the load and temperature the pistons and rings have to endure. Smaller high-output engines require a piston that is made of a material that can handle higher temperatures and combustion pressures. Yesterday’s cast pistons just won’t cut it for today’s gasoline direct injected (GDI) or turbocharged direct injected (TGDI) applications.

Most GDI engines use cams with variable valve timing (VVT). While VVT may provide a lot of room for tuning the performance of the engine, this set up necessitates the need for deeper valve reliefs on the piston tops to give enough clearance for the valves as the cam advances and retards. The cam phasers in most engines with VVT can rotate the cams up to 40 degrees, and some may shift cam timing as much as 60 degrees. That’s a lot of cam rotation, so if the pistons don’t have the right clearance for the valve reliefs, valuable metal parts could collide if the valves are held open too long. 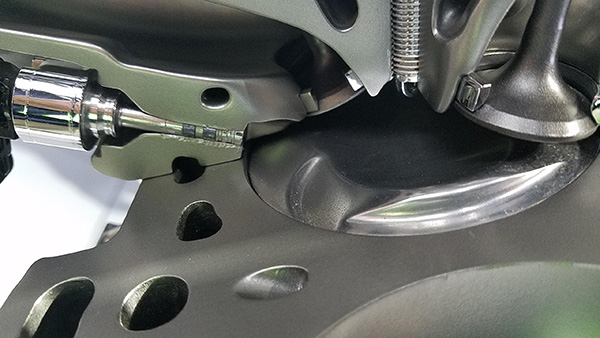 Pistons for GDI engines are very similar in design to port injected engines except for the crown area. Most pistons in GDI engines have depression in the crown that directs the fuel towards the spark plug once it has been injected. This puddle of a relatively rich fuel mixture is aimed at the spark plug to initiate combustion. After the spark plug ignites the pool of fuel, the rest of the fuel in the chamber can be combusted to produce a more efficient mixture.

For most performance and high-output engines, forged pistons are the way to go because they are manufactured from the most durable alloys such as 4032 and 2618. When it comes to tensile strength, the two alloys are not far apart. 4032 has a rating of about 55,000 psi, and 2618 is rated at around 65,000 psi. A 4032 piston is slightly lighter than a piston made of 2618. Pistons made with 4032 alloys have about 10-12 percent silicon content and are popular for applications such as nitrous oxide or mildly boosted forced induction engines. The silicon content gives the aluminum a lower expansion rate as compared to 2618 alloy and can be run with a tighter piston to cylinder wall clearance for better durability. Pistons made from 4032 also have the added feature of not making as much noise while the engine is coming up to operating temperature.

Alloy is heated to a liquid state to make a casting, then poured into a mold to create the basic shape of the piston. After the alloy cools down and turns solid, the mold is removed and the rough casting is machined to its final shape. Many stock engines use cast pistons because they are inexpensive and work fine at lower power levels. For higher horsepower applications that require stronger pistons, a cast hypereutectic is a good choice for moderate builds. Hypereutectic pistons are not as strong as forged pistons made of either 4032 or 2618 alloy. Therefore most engine builders use a forged piston for performance applications that use boost, nitrous oxide, high rpms or a combination thereof. However, cast hypereutectic pistons thermally expand less than forged pistons that are made from low expansion 4032 alloy. Consequently, hypereutectic pistons can run a tighter piston-to-cylinder clearance than forged pistons. Hypereutectic pistons are typically the best option to use for stock engines, especially when longevity is concerned rather than pure performance. 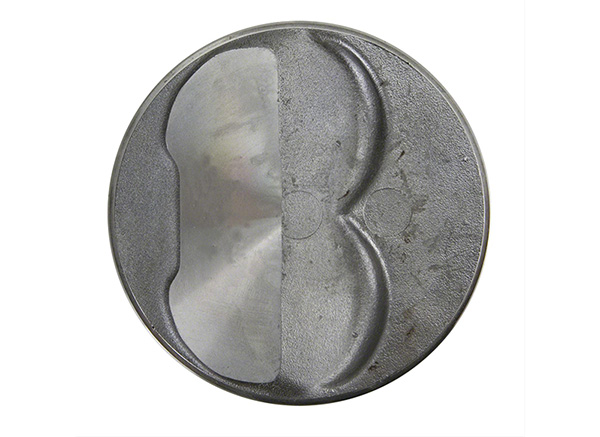 OEMs and aftermarket ring manufacturers are continuing the trend toward thinner, low-tension rings to reduce friction and as they are more conformable to the cylinder wall. They also provide better sealing with less blowby than traditional ductile iron rings. A traditional ductile iron compression ring produces about 7 to 8 pounds of tension compared to about half that for thinner style steel rings being used in some top racing divisions. A 1.0 mm or less ring offers a significant reduction in friction and drag, but it also requires a stronger, more durable ring material.

Carbon steel rings, which are used for both performance engines and late model OEM replacement sets, are 35 percent stronger than grey cast iron. Carbon steel rings can be coated with moly, chrome plated or run unplated.

Another type of steel ring is available in stainless, which is the material of choice for many pro racing classes and other high-end applications running rings as narrow as 0.7 mm. Stainless steel rings cannot be run in a cast iron bore without a surface treatment such as gas nitriding or PVD with an alloy of titanium or chromium. 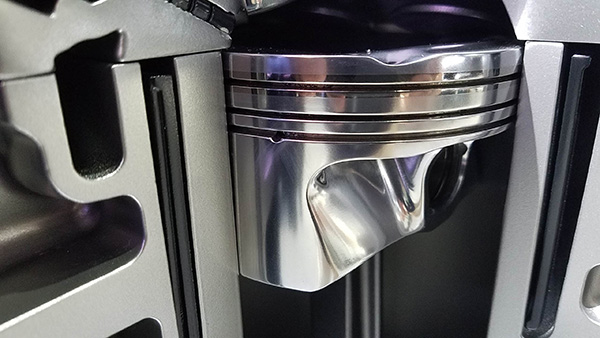 Coatings are available in various compounds and processes from graphite to ceramics to anodizing and more. Piston coatings offer some benefits in specific applications. Manufacturers and coating companies use proprietary names for coatings in many cases, but there are essentially only a few types from dry-film to sprayed on ceramic to DLC or PVD that impregnates into the surface of the metal. PVD coatings deposit a thin (2-10 microns; 0.0001″-0.0004″) film on the surface of ring. The PVD coating process is conducted under high vacuum condition, which makes it expensive but manufacturers think that the cost will come down as the demand increases. 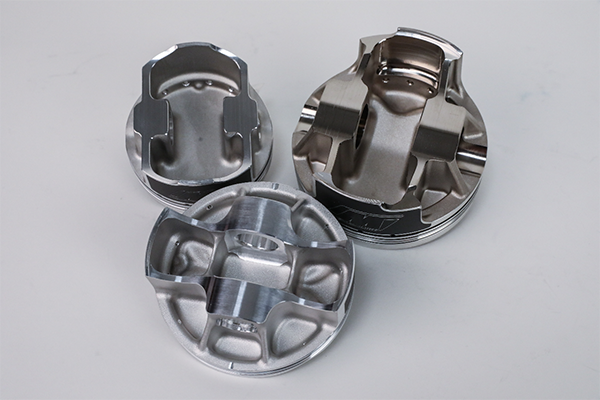 Gas nitriding is a heat treatment process that impregnates the surface of the metal with nitrogen to case harden the metal. When used on piston rings, it case hardens the entire surface of the ring to a depth of about .001˝ which significantly improves its resistance to side wear as well as face wear. Gas nitrided rings have a hardness that translates into a Rockwell scale of about 68 HRC, which is almost 50 percent harder than steel rings and four times harder than gray cast iron rings. The rings are so hard, in fact, that ring wear is virtually nonexistent. Ring manufacturers that use this treatment say the cylinders will wear out before the rings will!

Just like fast food restaurants offer value meals and combinations that include a sandwich, fries and a drink, piston and ring kits are available and a popular choice among engine builders. Piston and ring kits can consist of either cast, hypereutectic, or forged pistons and a set of matching of rings of your choice. The pistons include new wrist pins and come available in standard bores as well as oversized bores to fit specific engine combinations. You can save some time and money by getting matching components in one package. 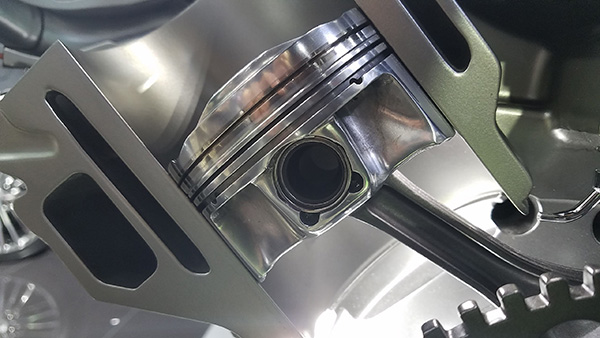 It has been said that roughly 50 to 60 percent of the total friction generated by an engine comes from the piston and rings. Top engine builders and manufacturers know this, which is why we now see so many gains in power. The challenging part is to reduce friction AND still do the job of sealing combustion and transferring the energy to the crankshaft, but the payoff can be big if you get it right.

Advertisement
In this article:pistons, rings