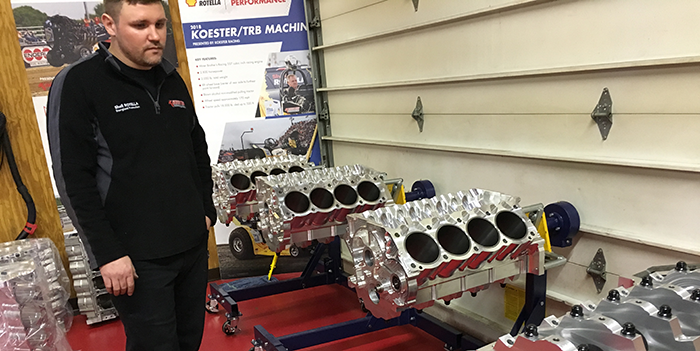 When he first rises to shake your hand, you’re struck by the fact that Adam Koester has a bit of swagger and an air of self-confidence about him. And why wouldn’t he? In the tractor pulling world he’s kind of a big deal. He could be considered part of royalty, with a beautiful wife and a legendary winning family. He has a great sponsorship from one of the world’s most recognized brands. And he builds engines at the foot of a respected mentor.

Koester, 33, is driver of the NTPA Modified Mini tractors “Beast of Burden” and “Walk the Line.” He began his career in the Modified Mini division by winning the 2005 NTPA Rookie of the Year Award, clinched his first championship in 2007 and his second in 2016. His father, Larry, also won Modified Mini championships in 2001, 2006, and 2008 aboard “Footloose,” and his sister, Ashley Corzine and her husband Craig, campaign “Burn Notice” and “Second Degree” trucks in NTPA’s 6,200 lb. Super Modified Two-Wheel Drive class.

But don’t mistake his self-confidence for self-importance. Koester is a humble, polite young man who understands that what he does is a business – and business is looking good.

“Miner Brothers had always raced Chrysler engines and suffered through the typical problems with those engines,” said Bob Miner. “We started running one of the Fontana 8.3L engines – cast block, still looking like something from the ’70s…I started doing a billet block, put in a bigger cam and made some other developments that helped us win a lot of races. We also helped Joe get a lot of sales to other customers as well. We were going faster than anyone when Joe put the business up for sale. I thought, ‘I’ve been developing this thing for the past 5 years – what if somebody else gets it!’”

The three Miner brothers, two of whom are no longer in the engine business but still own a Mack truck dealership in California, bought the business from Fontana. Bob Miner says his background as a diesel mechanic prepared him surprisingly well for his new customers in the gas world.

“When it comes to buyers and users of diesel trucks, you learn to listen to their concerns, figure out what they’re really asking for. You have to learn to deal with customers,” he says. “Really, it’s no different in any other segment. The engine’s just fine – it’s just that dealing with customers isn’t always easy.”

Today, the alcohol supercharged 8.3L MBR engine is very popular in sportsman drag racing, particularly in the Alcohol Dragster and Funny Car and Pro Mod classes as well as being a winning combination for its tractor pulling customers like the Koesters – and Miner says partnering with Adam Koester as his engine builder has been very successful.

“I come from the drag racing world – each year it gets more and more expensive because they add more rules and guys continue to find new ways to interpret those rules. – not to cheat, exactly, but to stretch them. In pulling, there are very few rules. It’s easier to do and folks just seem to enjoy themselves,” Miner explains.

“When I first started going to the pulls, people would say ‘This isn’t drag racing!’ Well, you stand behind one of those things and it sure looks and sounds like drag racing!” he says. “All of the things you do in drag racing apply to pulling, but the racers and pullers always think they’re so different. You may not set them up the same way but you’re trying to accomplish the same thing.”

Larry says although he knew his way around an engine, he wasn’t an “engine builder” – he had too many things to distract him from being good at it. Adam, however, showed real promise. “I told him when he started building motors for other customers to build their engines exactly like you build mine,” Larry says.

“I started building engines when I was 18 years old,” Adam Koester says. “Dad told our engine builder that we either needed to learn how to build the engines ourselves or we needed to quit pulling. Bob was relatively new, and the options for engines were pretty limited.”

Adam went to college at Vincennes University in Vincennes, IN for an education in engineering and technology, but it was Miner who really took him to school. “Bob told me he was getting to the point in his career that he didn’t really care about assembling engines anymore – he wanted to focus on the design. And he also told me I could talk to the customers…that’s been a REAL education!” Koester laughs.

Koester says the engines he and Miner provide is based on Chevrolet big block casting but has Hemi heads – sort of.

“The blocks are machined from billet aluminum by Alan Johnson Performance Engines but it is a custom design. It doesn’t have a Chevy bolt pattern but it uses Chevrolet mains in the crank. The rod journals and rear flange is like a Chrysler. The rear bolt pattern on the bell housing is either Chevy or Chrysler. The front cover is kind of like a Chevy but it’s got the accessory drive over to the side for us to run our mag and oil pump from. AJPE builds the blocks, we add the cyinder liners, make the main caps, the pan rails, the rear shield plate and most of the stuff that bolts on to it. It’s a great process,” says Koester.

“When I first got started, people used to ask me what I was going to all that engine,” says Miner. “They couldn’t figure it out – it wasn’t something they’d ever seen before. I told them ‘you can call it whatever you like, just as long as you buy one.’”

Koester explains that the success his customers have had with the engines he and Miner provide has at least something to do with partnerships with quality aftermarket suppliers. Dependable parts and products make consistent builds reliable. He says Darton Sleeves, GRP Rods, CP Pistons, Jesel Lifters, Vicotry Valves among many others as well as the team’s long-time partnership with Shell Oil and the Rotella brand. “We do a lot of R&D on our own tractors – especially Dad’s – and when we find brands that really work we use them ourselves and recommend them to our customers,” he says.

Koester says his customer database includes at least 250 racers and pullers all over the world, and says he builds 15-20 new engines each year for customers

“In addition, we get requests for a lot of repairs,” he says. “Some are minor rebuilds, some are major repairs including welding windows in blown-out blocks. We’ll do about 30 rebuilds in house and probably send another 50 or 60 out to have done.  Sometimes there just isn’t time!”

Koester says, just as with his parts suppliers, the interaction with customers solidifies long-term partnerships. The shop serves dual purposes of space to manufacture and space to meet – because the customer interaction remains part of the magic.

“We know we have a good product, and it’s been passed down through generations. People know about it; we don’t really have to push too hard to sell it,” Miner says.  “You get a guy that’s interested in buying something and you might take some time and sit down and try to convince him to buy, but its pretty hard to chase these guys around and try to convince them of something that they already have set in their minds.”

Koester says past and current results will continue to do the talking for him in the future. “Our deal is either you want it or you don’t. I’m not going to sit here and tell you why it’s better. Just try it and then you will know why it’s better.” •