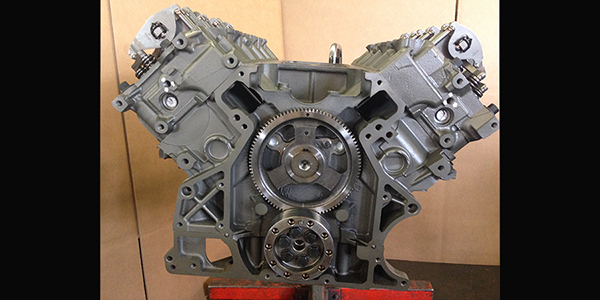 Bucking the trend of the engine building industry being male dominated, Bridgette Fitzgerald has been at Barnette’s Engines for 10 years, spending six of those years as the shop’s foreman! She’s an integral part of helping rebuild engines like this Ford 6.4L diesel. Find out how she got to where she is today and what went into this diesel rebuild.

Fresh out of college and looking for work, Bridgette Fitzgerald landed a marketing position at Barnette’s Engines in Chesapeake, VA. She was young and inexperienced with the engine industry, but figured it would be a good stepping stone to another job. Ten years quickly passed and Fitzgerald is now the shop foreman of Barnette’s Engines and knows more about engine work than most. She keeps the 8,000-sq.-ft., 9-employee remanufacturing shop moving along like a well-oiled machine.

Barnette’s Engines’ owner is William ‘Danny’ Barnette, who got started in the engine building industry back in 1970. His father was a machinist and Danny was gladly sucked into the world of engines. In 1992, he retired from working at an engine shop in order to open his own.

“That year, I started the process of gathering new machines and opened Barnette’s Engines on April 1, 1994,” Barnette says. “Our main business is building remanufactured engines to fit OEM cars and trucks. We ship engines to the lower 48 states. We also sell cylinder heads, crankshafts, connecting rods and more through our website, and we do local machine work.” 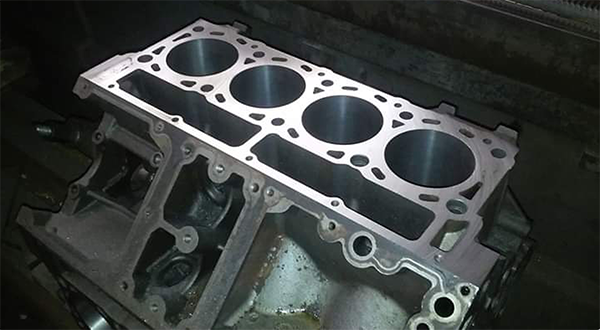 Barnette’s will rebuild automotive engines, small diesel engines, marine engines, and industrial engines for forklifts. The shop is a full machine shop capable of doing everything in-house, and those responsibilities fall to Bridgette Fitzgerald.

“When I started out, I was pretty much right out of college,” she says. “My job was handling some of the marketing. Once I realized I had to learn the product in order to actually market it correctly, I actually learned a little bit more than I probably thought I was going to learn, and it just evolved from there. I learned the engines in and out. I learned a lot about casting numbers and what different bolt holes mean for different engines and things of that nature, and it just went from there. I started learning all the internals and got into all the machine work. Now, that’s basically what I do. I’m the shop foreman.”

Fitzgerald has been in the position for six of her 10 years at Barnette’s and got there without formal training – it was simply hard work and a lot of hands-on experience.

“I never went to any trade schools,” she says. “It was just a lot of hands-on experience. It was a lot of watching some YouTube videos and working with the guys in the shop. It was a struggle at first for them, but once they realized I was trying to learn it, they did really good at helping me learn everything.” 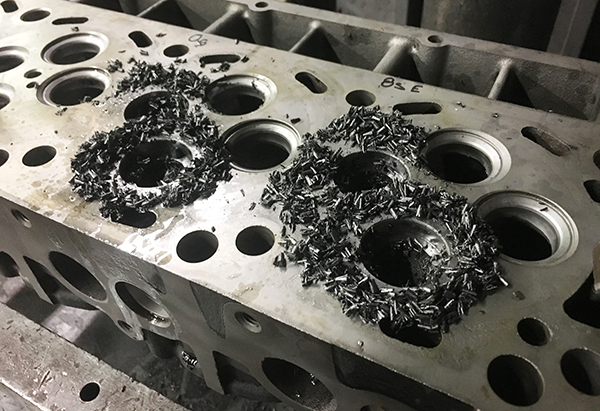 It’s no secret that this industry is male dominated, but Fitzgerald is happy to help buck the trend and loves everything about rebuilding engines.

“I love being able to revive something like an engine,” she says. “To see what a motor starts out looking like and then to watch these guys use the equipment and bring it back to a brand new engine again is something I’ve found pretty interesting. I’ve also come to appreciate the market and the need for this work. I love the whole process. Taking something that somebody thinks is trash and turning it around to become a treasure to somebody else is the most interesting thing.”

Barnette’s Engines does a majority of its engine work on Ford 5.4L, 6.0L, 6.4L and 6.7L diesels, GM 5.3L and 6.2L engines, as well as motors that other manufacturers won’t rebuild such as Saturns, Honda Vtechs, Hyundai, and Kia motors. 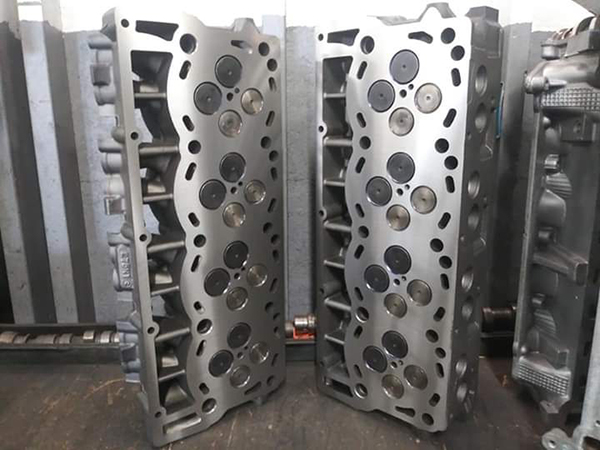 Barnettes Engines’ Kevin Csomay will replace the valve seats in the 6.4L diesel and use a Serdi seat and guide machine to do the guide work on the heads. He’ll resurface the heads using a Rottler SF7 resurfacer. The heads are then sealed back up with new valve seals and springs.

While the shop works on a wide array of engines, the one that has the most demand is the Ford 6.4L diesel. The shop starts off with a core motor – either one of the core motors kept in stock or the customer’s core.

“The biggest thing we see on the 6.4L diesels, which makes it hard to locate good cores, is unlike other engines with individual main caps, the 6.4L has a cradle,” Fitzgerald says. “A lot of times, the center mains on the cradle are the ones that get destroyed. They get destroyed to a point where line boring wouldn’t even fix it. To start, we’ll get the core in the shop and strip it down completely. Every bolt comes out of it. Once it’s completely disassembled, we get it clean in order to check it out.” 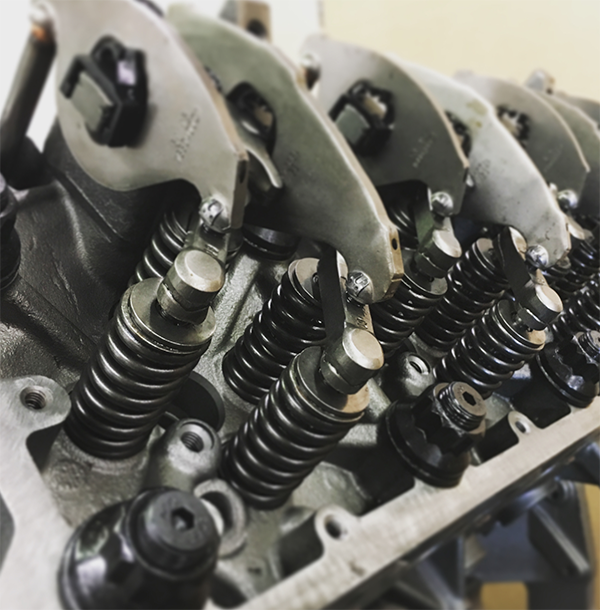 “We pressure test the cylinder heads,” she says. “We’ll hook it up to air and submerge it to check for any kind of internal cracks. We also can mag test them with magna flux to check for any kind of surface cracks. Even with micro cracks, replacing the seats and then putting it back under pressure is what tells us that the head is able to go back on the motor without any kind of issue. From that point, once we realize we’ve got good major components, we start in on the machine work.”

The shop’s machinists, specifically Kevin Csomay, will replace the valve seats in the 6.4L diesel and use a Serdi seat and guide machine to do the guide work on the cylinder heads. He’ll resurface the cylinder heads to a mirror-like finish using a Rottler SF7 resurfacer. The heads are then sealed back up with new valve seals and springs and the cylinder head portion is basically done minus painting and priming. 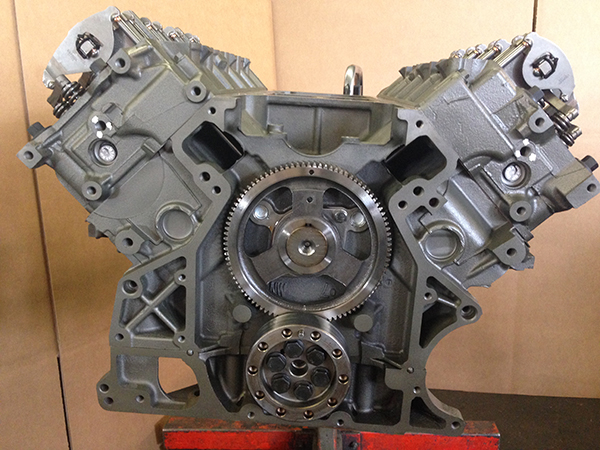 “We’ll then turn our attention to the block and bore and hone the block using a Rottler HP6 hone and a Rottler F2 boring machine,” Fitzgerald says. “If one of the cylinders won’t clean up we will also sleeve the block if it requires sleeves. We’ll check the deck surface of the block and deck the block.

“From there, we’ll do the cam bearings and freeze plugs. We’ll chase all the oil galleys and galley plugs and things like that, and then the block work is done.”

The shop will also use a close eye on the 6.4L diesel crankshaft, making sure to polish and turn the crankshaft to whatever size is needed due to wear on the crank using a Winona Van Norman. This is also the time the shop will check the connecting rods. 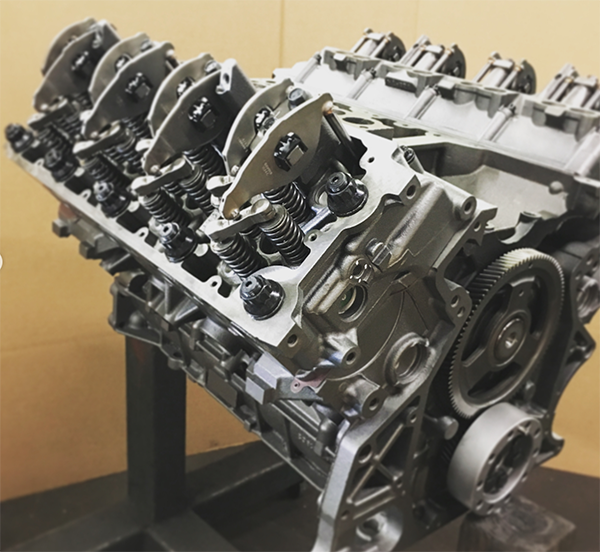 “Once we’ve got all the parts and components machined and ready to go, then we’re ready for assembly,” she says. “We use both OEM and Aftermarket parts on the build. On the 6.4L diesels, we use an OEM oil pump, OEM main bearings for the crankshaft, and we use OEM parts in the valve train. That’s all OEM Ford.

“For pistons and rings, we use coated, Mahle pistons and rings. The rod bearings are Clevite and the cam bearings are ACL. Also, these engines always get brand new lifters. We don’t ever reclaim any lifters. On the 6.4L we also promote getting ARP head studs versus new head bolts. We really push for the stud because we know there are known issues with head gaskets on 6.0L and 6.4L Ford diesels.” 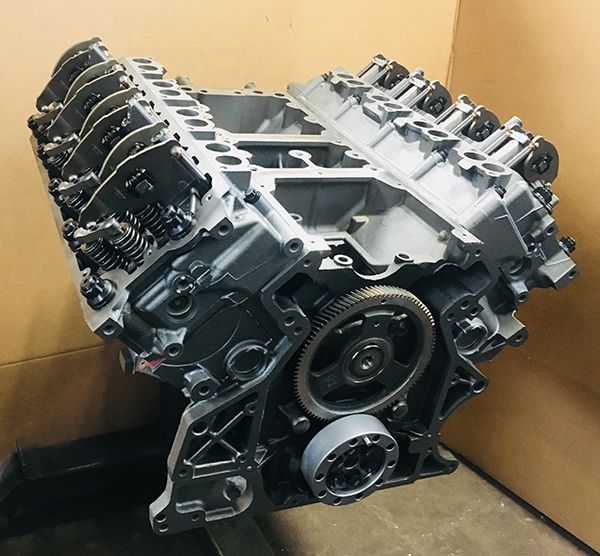 With all of the wear and rust cleaned up, the engine machined back to like-new condition and the new parts assembled in the engine, the Ford 6.4L diesel gets painted and primed and sent back out the door as a remanufactured engine with a clean bill of health. On to the next one!

Advertisement
In this article:diesel, Elring, Engine of the Week, Ford, PennGrade Motor Oil