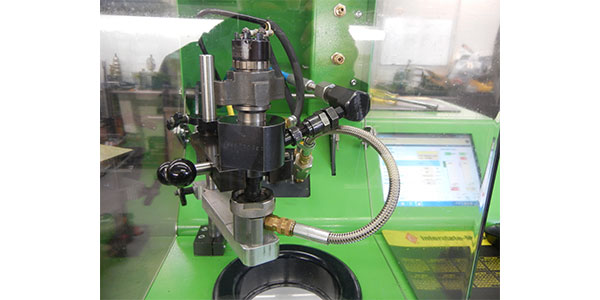 These days just about everything is computer controlled, and we mean EVERYTHING. But the only kind of electronics we’re interested in for this article is one of the oldest computer-controlled engine parts around – the humble fuel injector.

These days just about everything is computer controlled, and we mean EVERYTHING. There are computer-controlled machine tools (which many of you use daily), drones, sewing machines, musical instruments, robotic welders, telescopes and more. But the only kind of electronics we’re interested in for this article is one of the oldest computer-controlled engine parts around – the humble fuel injector.

High-performance and stock fuel injection systems must calculate the proper amount of fuel to flow at the precise moment it is needed. The difference is that in racing or a performance application, the demands are much higher. More power requires more fuel and more computer control of the injector timing.

Having a set of high-flow fuel injectors won’t mean anything without the proper amount of fuel supplied from the fuel tank to build the pressure needed for atomization and combustion, so increasing the fuel pressure and volume is often a necessity. Another necessity for engine builders who work in the EFI world (which is a significant percentage of you) is the need to select injectors that ultimately flow more fuel to unlock the horsepower potential of your build.

Five years ago, Srdjan Bjelanovic started Cleveland Injector Hospital because he wanted to service his drag car that ran on E85. At the time, he didn’t know that much about fuel injector cleaning until he researched it and bought a machine. The system he wanted turned out to be more expensive and time-consuming than he envisioned, so Bjelanovic sold his car to buy it and start his shop.

“A lot of guys were running injectors that had never been cleaned or serviced and having driveability issues because of it,” says Bjelanovic. “I always tell my customers that it’s cheap insurance for your expensive engine and injectors. It’s best to clean them at least once a year.”

What Bjelanovic found in the years since he started cleaning and servicing injectors was that if a racer or street rodder used E85 as their fuel, they needed to flow well because these applications consumed more fuel than pump gas injectors. He also found that the fuel was very corrosive and if left untreated would gum up the injectors.

There’s a misconception among some enthusiasts as to what shops like Cleveland Injector Hospital can do; they are not able to replace all the parts of an injector and make it like new. Bjelanovic says what they do is replace things like the O-rings and filters and perform ultrasonic cleaning and a reverse flush to get out the contaminants. But if an injector has a failed winding or solenoid, or a pitted pintle due to corrosion, there’s not much anyone can do but order a new injector.

Flow testing is, of course, part of the service that shops like Bjelanovic’s provide, and that can help engine builders determine how to match injector flow rates more precisely.

There are also some helpful “injector calculators” available online to help you choose the exact cc size and flow rate. You may also use it to explain why your customer doesn’t need to go up to a 2,000 cc injector and so on. To use a fuel injector sizing calculator, enter the crank horsepower expected, the number of injectors, the correction number based on naturally aspirated or power adder. Some calculators go a bit further and factor in a goal PSI at the rail. But most calibrations for fuel injector performance starts with using Brake Specific Fuel Consumption (BSFC) as the starting point. (See chart below).

Maximum Injector Duty Cycle should not exceed 90% (0.90) for these calculations.

Keep in mind; most injector experts recommend going up a size to give extra margin. You never know when your customer may want to upgrade his or her build later on or add a bigger turbo or supercharger. The aim is to reach the maximum flow required at less than 80 percent duty cycle. Any higher than 80 percent runs the risk of failure.

For engines running pump gas, a 1,000 cc injector can be good for about 500 horsepower. But if the engine will run E85, you’ll need, on average, 30 percent more fuel to make the same amount of power. Engines running dual port injection (port fuel and direct injection) may require a smaller injector size to produce the desired amount of horsepower because of the combined injection.

What Hondata found is that the reliability of the transistor was related to heat, which is a by-product of the current flow. More current means higher temperatures. Not only do the injector drivers get hot, but the injectors themselves heat up from the current passing through them.

If that temperature remains high enough for long enough, the driver transistor will become damaged. Therefore, Hondata recommends that its customers run high impedance injectors, or use a resistor pack with low impedance injectors.

To service diesel injectors, shops need to make a significant investment in testing equipment. It takes years of training to understand diesel fuel systems, and we are only able to scratch the surface here. But according to Bryan Menke of R&R Engine and Machine in Akron, OH, and former Machine Shop of the Year winner, servicing diesel injectors is a costly proposition on the business side because of the equipment you need to stay on top of it all. Bosch is at the top of the food chain when it comes to diesel injection, and to be a certified dealer and service center the company has insisted that all of its dealers buy new testing stands and get training.

The equipment is not inexpensive, which is why some shops have bowed out of the program. Menke says that Bosch dropped as many as half of their dealers who didn’t step up to the new test rigs. “I’m young enough, and we have the demand, so I guess it was worth the investment,” says Menke. And it probably will pay off sooner than later because R&R is one of only 2 or 3 shops in Ohio to have the new machines. “Otherwise, you have to take the Bosch sign down,” quips Menke.

Unlike gasoline injectors that can only be flowed and cleaned, Menke says diesel injectors, since they are very costly ($400-$500 per injector), are much more serviceable. R&R can rebuild almost any diesel injector with his new Bosch machines from older HEUI 7.3L Cummins up to 14L Series 60 Detroit Diesel injectors. HEUI injectors are hydraulically activated and electronically controlled. The newer style injectors are common rail design that can run rail pressures of 30,000 psi or more. The machine takes about 15 minutes per injector to run testing and produce a file of the results. Some of the newer Bosch injectors have what Menke says are “trim codes” printed on them that get plugged into the computer to compensate for the characteristics of that particular injector. “If one is a little slower than another, the trim code can compensate,” Menke notes.

One of the more common problems with diesel injectors is ball seat erosion. Abrasive contaminants can erode and damage the ball seat causing the ball not to seal correctly, leading to improper injection. Customers that don’t keep up on the maintenance and filtration needs of a diesel engine can lead to injector issues. According to Bosch, the majority of diesel engine problems stem from contaminated fuel.

Whether it’s gas, diesel or performance, the need for fuel injector maintenance and repair is only becoming more important as the computers that control them require more precise flow rates.