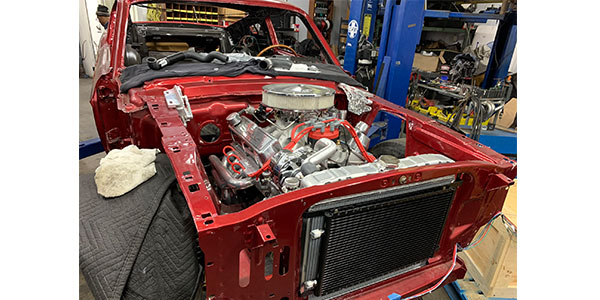 How many times have you had a customer come in for an engine build who asked if you do engine installations? Those dollars are leaving your shop and going elsewhere.

Should you consider offering more to your customer?

How many times have you had a customer come in for an engine build who asked if you do engine installations? How about transmission work? Fuel lines? Suspension? The list is probably endless. However, more often than not, you’re probably turning them away because you don’t offer those services or don’t think you have the capability. Those dollars are leaving your shop and going elsewhere.

Many shops today that offer additional services beyond engine building are considered full-service shops, and were likely derived that way from the start. However, that doesn’t mean a shop that only focuses on engine building can’t get into engine installations, transmissions, restorations and other value-added services for their customers. You’ll just need to have the space for installation bays and lifts, employees with the necessary skill sets and a well thought out pros and cons list. But it can be done!

We recently spoke with two full-service shops and dove into the reasons why they love doing more than just engine building, what the benefits are and what some of the downsides can be. JRP Performance in Bellflower, CA, specializes in sport compact work, and Custom Performance Race (CRP) Engines in Gardena, CA, specializes in performance and restoration work. Each shop has found it beneficial to have installation bays and lifts for added service offerings.

JRP Performance, which is owned by Roni Almasi and Jeffrey Velazquez, has four bays and three lifts. According to Almasi, JRP can fit seven cars in the shop simultaneously thanks to this set up, offering the capability to work on various projects.

“The three bays with lifts are what we use most here and are the most efficient as far as the installations go,” Almasi says. “When we first started, the shop had two lifts. We ended up taking over the neighboring shop, and its lift, giving us our third. That third lift is furthest back and its where we do most of the service work and quick stuff like spark plugs, oil changes and fluid changes. The front two lifts are mostly for bigger projects such as dropping transmissions, engine installs and engine work.”

JRP was founded about a year and a half ago with the intention of making use of lifts and bays so that the shop could do more than simply build engines.

Custom Performance Race Engines (CPR) has been around much longer, but began in a similar way. Owner Martin Marinov utilizes three lifts and four install bays in the shop to offere much more than simply engine work.

“We have the capabilities to do complete restoration projects that involve a lot more than just rebuilding the engine,” Marinov says. “It’s a value-added service for the customer.”

Of course, before we get too deep into the upsides of adding services to your shop, it’s best to consider what potential downsides are or could be. First and foremost, you’ll need to consider what extra help or additional employees you may need in order to accommodate the extra work.

“Shops considering adding installation services and other services need to weigh their pros and cons and make sure that they get good help,” Marinov says. “Good help is hard to find, and that’s the biggest thing – having a team of techs and mechanics who really know what they’re doing. If you have somebody who doesn’t know what he or she is doing, then you’re just creating more problems for yourself.”

Next, you’ll want to make sure you have room for an installation bay – or two or three – and the necessary lifts. Without it, these added services are tough to perform efficiently.

“If you’re going to do a lot of engine installs and pulling engines and you don’t have a lift, you’re doing it on the floor. And if you’re doing it on the floor, it takes efficiency away.” Almasi says. “Most shop owners know efficiency is key to generating revenue and keeping customers happy and allowing you to make promises and keep them. Lifts and installation bays will certainly benefit somebody trying to do more engine installs by making the process so much faster. It’s a very worthwhile investment.”

Almasi explains what might seem obvious but isn’t always remembered. “As part of the engine building service, you may encounter other services that spawned from the build. It can snowball into a huge project, which takes a long time and cars tend to sit on the rack and customers just keep adding and adding and adding.”

Customers-added services will at least make you more money; however, having to wait on customer decisions will not – it just costs you more time. No matter what services your shop provides, this is a common occurrence.

“When we need a decision on what needs to be done with a certain part of the vehicle, sometimes getting ahold of the customers and getting them to give you an answer can waste a day or two,” Marinov says. “But you have to get their approval before you continue.”

Here’s another thing to consider when installing an engine in a customer’s car –  remember that the car itself might be have a lot of hidden issues that you’ve now inherited. “There may be 25 years of nightmares for you to chase down,” Marinov says. “Even if your engine is perfect, it might not perform perfectly in the customer’s vehicle; not because of anything you did, but because of previous issues the car has. However, you want to take care of the customer through and through.”

Adding services to your shop’s list of capabilities can be bittersweet, but overall JRP and CPR both say they’re pleased they can offer and perform these extra services.

That brings us to the real reasons to consider installation bays and lifts in an effort to add services to your shop. There are many upsides – even more than downsides – to making your engine shop a full-service stop for customers.

“I believe it’s a great thing to do if you’re confident with your skills,” Almasi says. “Being a full-service shop makes me much more comfortable knowing that myself or my employees are the only people touching the cars. If there is a problem that has anything to do with the installation or something like that, I can rule out somebody else’s mistake.”

Mistakes are inevitable, of course, since we’re all human, but having the ability to do everything in-house and sublet as little work as possible to take a customer’s engine and vehicle from A to Z, cures a lot of potential headaches. “I want to be the only person that touches the car so if something goes wrong, I know exactly what it is and there’s nobody else to blame,” Almasi says.

Can you imagine a world where no other shop or mechanic can blame you as the previous engine builder for mistakes that were actually their fault? This is one of the most attractive reasons adding services can be a great idea.

“Sometimes, mechanics are sloppy and hasty and they just want to get things done – they’ll blame mistakes on the engine builder,” Marinov says. “For example, a lot of modern vehicles have oil coolers now but not every mechanical shop is aware of how they operate. Let’s say a vehicle had an engine failure, but the mechanical shops didn’t know everything to look for.  What ends up happening is they’ll take the engine out, they’ll send it in, they’ll get it rebuilt, but they won’t do anything to clean any of the components in the oiling system. They’ll put the new engine in and 500 or 1,000 miles down the road, they have a bearing failure because they failed to properly clean the oiling system.”

Marinov explains, “That’s not a part of the engine assembly itself. When something like that happens, they’re often quick to blame the engine builder when they themselves are the ones to blame. To protect yourself as an engine builder, you can offer that type of service. Being in control of the installation process or doing those extra, added services helps protect you from potential failures and getting blamed for things you might not have done.”

Aside from gaining some protection from blame, adding services also allows you an easy way to upsell customers and keep them coming back for more. “We get customers who come in just for an engine build and then they see the other projects we have around – we’ll engage in a conversation with them to make sure they’re aware of what they’re paying for and receiving, but also what else we can do,” Almasi says. “By the time they walk out, it’s no longer just an engine build – they’ll add things to the list.”

Both JRP and CPR have found their customers are happy they can come to a one-stop shop that lets them come in and get everything done at the same time. “You have control of the process every step of the way,” Marinov says. “You can do a better service to your customer. We’re able to machine everything in-house, assemble the engine, test the engine on the dyno and put it in the car. When you’re the one installing the engine, it’s easy to see problems such as not enough fuel line, fuel pump issues and more.”

And don’t just think performance. “You’ll be able to give the customer safety tips. You’re able to tell the customer, ‘Hey, you’re making 800 ft.-lbs. of torque now and these brakes aren’t going to stop you in this vehicle. You should probably do something about that,’” Marinov says. “Being part of the complete process allows you to guide your customer in the right direction to have a safer, more secure, more reliable vehicle down the road.”

Adding installation bays and lifts will also make your shop more efficient at accomplishing any task because it naturally creates a cleaner, safer and faster working environment – not to mention a more profitable business.

“You can do a lot of things without a lift, but if you have a lift, chances are your actual labor time is going to get cut in half,” Almasi says. “You don’t have to struggle. You can become more efficient, and instead of working on one car, you can do two cars in that timeframe, and essentially make double the profit.”

If you maximize your training and efficiency, there are definitely many positives to being able to control the full scope of automotive services and being able to guide your customer along, give advice and help them with their racing program, with their street rod, their hot rod, or whatever it might be that you’re working on. A lot of people see that as a strong, value -added service.

Will you consider making the change in your shop?