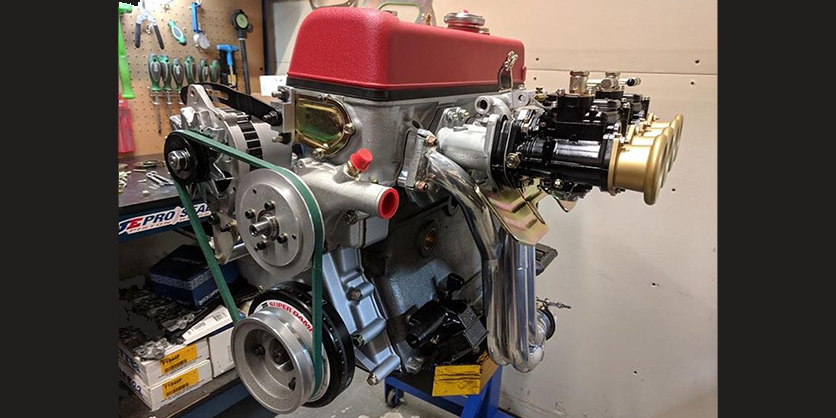 Mitchell Wilson recently had a first time customer get referred to his shop, Engineered Performance, to do the engine work on a 1960s Nissan/Datsun U20 engine. The build presented a unique challenge and Wilson jumped at the opportunity. Find out what it took to turn this vintage engine into a modern-day performance motor.

We last spoke with Mitchell Wilson of Engineered Performance in Alvarado, TX a little more than a year ago. Since that initial meeting, Wilson has been a contributor to the Engine Builder magazine, and we’ve been keeping tabs on all of his engine work via his strong use of social media like Facebook and Instagram.

Wilson recently got in touch with us regarding a vintage 1962 Nissan/Datsun U20 engine he built, and after seeing the engine, we couldn’t resist knowing the full story.

“Everything is done here,” Wilson says. “The only thing I don’t have is an engine dyno, but that’s coming in the next couple years.”

Since the last time we caught up with Wilson, Engineered Performance acquired another machine shop’s equipment, allowing the shop to expand its engine platform and machining capabilities.

“We gained an extra 15 machines,” Wilson says. “We’re now set up with quite a few lathe and mill machines. We’ve got another cylinder hone, etc. We’re up to 24 machines in the shop now versus only six or seven a year ago. That gives me a huge amount of capability.

“We’ve also branched out a little bit more on the domestic stuff. My business partner is a 20-plus-year veteran of Reher-Morrison Racing Engines, so there’s a lot of pedigree there and a lot of people know him. That’s opened the doors a little bit more for us to do a lot more platforms on the domestic side. But we still do our fair share of imports, that’s for sure.”

The two-man shop recently got a call from Austin Z Clinic, an automotive restoration company that Wilson does a lot of engine work for. They had a customer looking to restore a ‘60s royal blue Datsun with an original U20 engine. Wilson was instantly intrigued by the challenge the older engine would be.

“I said, sure, we’d be interested in doing it,” he says. “It’s not a common engine for shops to be building, but we were excited about taking something on. I went down and picked it up and brought it back. It’s ‘60s technology, but it was really cool to see what Nissan/Datsun was doing back in the ‘60s to make a lot of power. They still do a lot of sanctioned racing on that platform, which is really cool.”

Wilson subsequently did a little digging into the U20 platform and found there was a lot of heritage and history on it. He found out that the Nissan/Datsun U20 was originally a forklift engine that they turned it into a hot rod engine. He also found out there wasn’t much aftermarket support for it.

“We were up for quite a bit of a challenge as far as trying to find parts readily available,” he says. “We came to find out there really wasn’t any. So we made it our mission to develop everything that we were going to implement into this engine.”

When Engineered Performance first got started on this build, it was just going to be a standard rebuild. However, that quickly changed when Wilson began telling the customer about what the shop could do for this assembly.

“He changed his tune and told us to do whatever we can do to get this engine done as badass as it can be,” Wilson says. “So we stepped it up and gave him exactly what he wanted and he’s tickled to death.”

Starting with the block, Engineered Performance did the standard bore, deck and hone work, but found some issues with the rope seal from the factory. To remedy the situation, the shop dealt with a rope seal manufacturer to get a custom seal set up for the assembly.

“Another big thing we did a tremendous amount of work on was the oil pump pickup tube,” Wilson says. “We actually made and developed an eight-quart pan for this engine. My business partner sat down and we drew out the plans for what we’re trying to do and he fashioned a complete billet pickup tube assembly for the oil pump. There was a lot of curtailing involved in getting that set up.”

Moving on to the assembly, Engineered Performance had to get much of it custom made due to the lack of existing aftermarket products available for the Nissan/Datsun U20.

“We reached out to Saenz and had Saenz Performance make us custom rods,” he says. “CP jumped in and developed a custom piston for us and we completely revamped the cylinder head. We actually outfitted the engine with small block Chevy valves that were stainless steel and we got an upgraded valve spring kit.

“We reached out to Web Cams to get a custom cam ground for us and came up with a fantastic profile that seems to work really well so far. It’s an asymmetrical lobe design – .310˝ duration at .495˝ lift – so it’s got a big number on the bottom end of it.”

In addition, the shop ported the cylinder head and the CP pistons went up three points for compression. Wilson also dropped 4.5 lbs. from the rotating assembly by upgrading the design and the parts from Saenz and CP.

“We did a lot with the assembly,” he says. “There’s a massive amount of response and rpm that we’re going to get out of this assembly just by dropping that weight alone. The engine still has the factory crankshaft in it. Those crankshafts are pretty bulletproof. They’re very heavy and very durable. Being from a forklift, it’s kind hard to beat those things up to the point you can’t use them anymore. We didn’t have any problem reusing that factory crank since it was straight. We went in and modified the oiling system on it to make it mimic a Chevrolet system. We got rid of rod bearing failures and adjusted oil clearances as needed.”

“We also did a lot of coating applications to the pistons, bearings, carburetors, camshaft, and rocker arms,” he says. “All the coatings were by Tech Line. The pistons were actually diamondized from a new ceramic anodizing process that we didn’t develop or pioneer, but we have been very headstrong on promoting it in the automotive racing industry, and we have a lot of clients sending us their parts to have that process done.”

A lot of the U20’s valvetrain components were able to be retained because they were actually over engineered for their time. According to Wilson, those parts won’t break unless the engine runs out of oil up top.

“We didn’t have that issue,” he says. “All we did was make sure that we cut down as much friction as we could and made this thing as race ready as possible for what we’re trying to do.”

One of the last things the shop did on the Datsun engine was develop a revised v-belt drive on the front.

“My business partner came up with a pretty cool idea of adapting some Moroso v-belt drive pulleys from a small block Chevy and we worked with ATI Damper to figure out some dimensions on some of their Nissan dampers that they run,” he says. “We were able to buy one of their shelf dampers and modify it to fit the U20 with no problem. Datsun Restoration Products supplied us with an aftermarket alternator kit that spaced everything out based on the new belt drive system that we developed for it.”

“For a car that’s anywhere between 1,700 and 1,900 lbs. completely dressed, back then that was pretty fast,” Wilson says. “Now, we’re trying to make it almost double that amount of output from just two liters of displacement. We’re hoping this assembly can pass the 200 horsepower mark. It’s going to be a little screamin’ demon when it’s all said and done with.”

To put the finishing touches on the build, Wilson wanted to make the engine look like Ferraris of the ‘60s, to really capture that automotive era.

“We had a blast building this thing, and one of the things I was trying to convey to the client was you have a vehicle that was built in the ‘60s that was sort of an icon for the import crowd,” he says. “For a lot of people in that era, the car that everyone wanted and fantasized about was the Ferrari. When people opened up the hood, they saw that red Ferrari valve cover, all the zinc-plated hardware, the silver cylinder heads, and the charcoal block.

“With the Datsun build, I wanted to play off of that. When you pop the hood, everyone looks at this and they go, wow. This thing stands out in the engine bay. But everything plays off a ‘60s era layout. We worked really, really hard at trying to keep everything, not only period correct as far as color scheme goes, but give it a good amount of contrast so that your eye could differentiate what we were trying to do and what we did.”

Advertisement
In this article:Datsun, Elring, Engine of the Week, Nissan, PennGrade Motor Oil