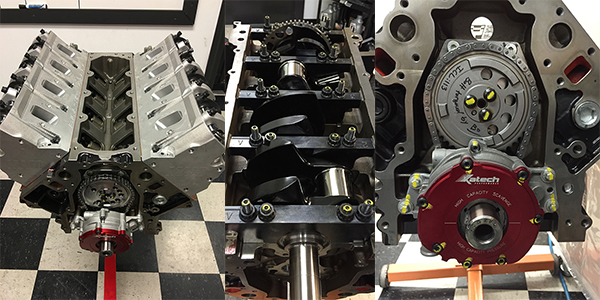 Halston Harrist wanted to become an engine builder so much that in high school he would ask the local engine shop if they were hiring on a weekly basis! The shop would host meets for local street racers every weekend, and after enough persistence, Harrist got his wish – he was working in an engine shop.

As Harrist got ingrained in engine building, he decided to attend SAM Tech in Houston to broaden his engine knowledge. While he was in school, he met Erik Koenig and started working for Erik at HKE.

“I never left Houston after that,” Harrist says. “I stayed here and met my wife and worked for Erik for about six or seven years. I learned 10 times more than I did in school. Then, I got the opportunity to work for Scott Herzog at Arrow Machine Race Engines. I worked for those two guys on and off for about seven or eight years. I worked for both actually at the same time for about four years. I would sleep on a cot in the assembly room when I was working back and forth for both of them. It was pretty fun.”

Harrist eventually got to run both shops. He got to know customers and vendors, and he started having customers reach out to him about doing work on the side. So he did.

“I started some builds in early 2011 in my garage at my house and it just kind of blew up from there,” Harrist says. “I had two main customers when I started my business. That kind of kept me going. I had a day job working in the oil field for the first couple of years. I left the oil field in 2016 and have been building engines full-time ever since.”

“I started the business because I could build an LS engine with my eyes closed,” he says. “That was the platform I was familiar with and that’s what got us going. Since being in business, I’ve got about five platforms that I specialize in. The late-model GM LS and LT is probably the majority of our business. We also build the late-model Ford, the Modular and the Coyote. We do a lot of 2JZ Toyotas. We also build Mercedes V8 AMG engines. Other than that, we do a lot of old school small block and big block engines.”

H-Squared Racing Engines tries to stick to performance racing engine work and has managed to keep pretty busy doing it. The shop is capable of doing everything in-house and is a full machine shop.

“We just bought three new machines two years ago,” he says. “I’ve got a four-axis CNC machine that we do most of our block and head work on. We’ve got a surfacer from T&S. We got a brand new balancer, an old school Sunnen CK10 cylinder hone and a Sunnen CH100 align hone. We also have a valve grinder, a line hone, a lathe, and a mill. The only thing we don’t do is grind cranks.”

All of Harrist’s knowledge, capability and machines have come in handy over the years, specifically for a good customer’s LS engine the shop has rebuilt several times. Harrist has a long relationship with this customer and has been working on this particular LS for many years.

The customer started as a customer of another shop and he decided to leave that shop in favor of H-Squared. He’s been a big part of Harrist’s business ever since.

“He sends me a lot of work,” he says. “His engine started out as just an LS7 block and then quickly he wanted to make big power, so we converted to a GM Performance Bow Tie LSX block. We started out by taking all of his internals and putting them in that. From there, he kept stepping it up. Every time I rebuilt it, he got nicer parts. I think the second rebuild we decided to go with a billet, center counterweighted crankshaft from Callies, which requires custom machining on the block.

“Once we got that one back out there, that’s when he started his big turbo kit. We brought it back for a refresh and noticed we were starting to hurt the valvetrain. We were breaking lifters and hurting valves and got Judson Massingill from SAM Tech involved to try and figure out what was going on.”

Everything was set up right from what H-Squared could tell, so the shop began to research the camshaft that was being run in the LS. It turned out the engine had a cam from another shop that did the turbo kit and the lobes were way too aggressive.

“We got rid of that and quit breaking parts,” he says. “We went to a COMP Cams proven lobe design and changed a few other things and we stopped breaking parts and got to actually have fun and enjoy the car. That was about the time that we upgraded the lifters. We lifter trued the block. It’s been fully machined on the lifter banks and fully trued for a Jesel .937˝ DLC-coated tie bar lifter and it’s got Amco 45 Jesel bushings in it.”

This was also when H-squared went ahead and did extensive head work. Harrist sent the heads to Greg Good of Greg Good Cylinder Heads.

“The engine has some Mast LS7 305 heads that Greg Good has done a bunch of work on over the past few years. It’s got all beryllium copper valve seats, tool steel valve guides, all custom titanium valves from Victory, PSI springs with titanium retainers, and DLC-coated titanium keepers to lighten everything up as much as possible. Trend also made us some tree trunk, 9/16ths pushrods that are .200˝ wall thickness on the exhaust.

“When engines make this much boost, you see a lot of exhaust pressure when that exhaust valve is trying to open. Because of that we put a huge pushrod in the exhaust so we don’t have any deflection. We have a half-inch diameter pushrod on the intake. They’re all Trend one-piece pushrods.”

“I’ve been part of this build for the past four years,” Harrist says. “It’s progressed from a 429 cid LS7 stock block to a pretty nasty LSX combination with some pretty insane heads. If someone were to build this engine from the beginning you’d probably spend $45,000 to $50,000. The engine is now a 431 cid LSX with a 4.000˝ stroke Callies Ultra billet crankshaft, custom CP pistons, and it’s built to handle every bit of 2,000-2,500 horsepower if it wanted it. Currently, it’s set up to make about 1,800 horsepower with the twin turbos. This is a nice engine to work on and it’s been fun to continue to improve it!”

The customer has the 431 cid LSX engine in a Corvette Z06 C6 and uses it for a street/strip application. We can’t wait to hear about what the next rebuild will entail!