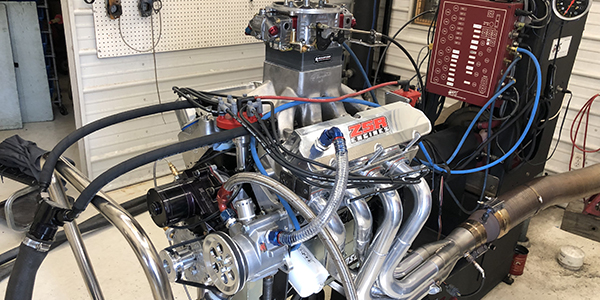 With a focus on building Ford engines, Zach Smith of ZSR Engines wanted to build his customer a naturally aspirated engine for bracket racing that was really low maintenance, didn’t cost an arm and a leg to race and could go multiple seasons without having to come back to the shop. Feast your eyes on the result – a 438 cid small block Ford capable of some serious horsepower. Find out what went into the build.

Looking to break out with an engine shop all his own, Zach Smith wanted to make sure his shop would have a niche market. He chose to build only Ford engines since those were the powerplants his family always raced with. He also wanted to ensure he took advantage of the internet and social media to market his shop not just locally, but internationally.

Zach and his wife Tori opened ZSR Engines in 2015. The shop was initially founded in Illinois, but was moved to Kaiser, MO at the beginning of 2018.

Smith got into engine building not much differently than most people who get into this profession. Growing up, his dad drag raced a ‘67 Mustang, and because Zach looked up to his dad and thought racing was the coolest thing in the world, his career was set at an early age.

“Everything just snowballed from there,” Smith says. “I started drag racing a Fox Body Mustang when I was in high school and that’s when I knew this was what I wanted to do. Right out of high school I ended up working for a local engine machine shop and worked there for a while. That line of work is really all that I’ve done – machining and engine building. As an adult, that’s pretty much the only career path that I’ve been down. It’s always been in my blood.”

After working at different engine machine shops for six or seven years, Smith decided he was ready to open ZSR Engines.

“I think it’s always a dream of anyone who works in one of these shops to have their own business,” he says. “It was always in the back of my head, but I wanted to have something specific. I didn’t want a shop that did anything that comes through the door. I wanted to have a specific market. My family always raced Fords, so it just made sense to do a Ford-only shop and have a niche market.

“Also, I wanted to have a strong internet presence so I wouldn’t have to just rely on local work. I wanted to have a set up to be able to ship engine work internationally. With the internet making the world such a smaller place, I really tried to focus on that and have a decent presence online and on social media. That’s the nature of the beast in this current time.”

Unlike many who open new shops with just a few key pieces of equipment with the idea to add more equipment later on, Zach decided he would get everything he needed upfront and just jump head first.

“All the machining equipment that we have now I bought up front as soon as we started the business,” he says. “We didn’t really ease into it. It was a real leap of faith.”

Four years later, the leap has paid off. ZSR Engines, which operates out of a 3,500 sq.-ft. facility, does small block and big block Ford engine work for racing applications – drag race, circle track, road course, and street/strip. ZSR Engines is capable of doing everything in-house when it comes to block work, the rotating assembly and parts like the connecting rods. However, the shop does send out cylinder heads for CNC work.

While Zach handles the engine and machine work for ZSR, his wife Tori handles the business side. Recently, the shop completed a naturally aspirated 438 cid small block Ford engine for a bracket racing application that Zach hopes will be one of his future engine packages available to customers.

“We’ve started trying to put complete packages together, rather than just having short blocks and long blocks listed. When people order it, we’ll still make changes to it, but we’ll start with that base package in terms of price point.”

For this build, ZSR’s goal was to build a naturally aspirated engine for bracket racing that was really low maintenance, didn’t cost an arm and a leg to race and could go multiple seasons without having to come back to the shop.

“The goal was to have something that’s not going to eat valve springs, beat up the valvetrain and be a maintenance hog,” Smith says. “That can happen with naturally aspirated stuff when you really have to lean on them.”

The build started with a standard small block Ford lifter and cam core size, and Smith decided to keep it wet sump for cost and simplicity.

“We used a Dart block and did all of our normal machining to it – square decking, boring, a torque plate hone, and a line hone,” he says. “For the rotating assembly, we got custom, dome pistons from RaceTec. We used Molnar 6.250˝ H-beam rods, a Scat 4.100˝ stroke crankshaft and a Bullet camshaft. We also used a ring set from MAHLE that has 1mm top and second rings and a 2mm oil ring. The engine also has Clevite coated bearings.”

The 438 cid SB Ford was balanced internally and came out at a 14:1 static compression. On the induction side, ZSR went with a Brodix casting that’s a 15-degree inline head.

“We had Kuntz and Company Racing Engines do the CNC work on those,” he says. “We used stainless valves in it since it’s kind of a sportsman deal. Those were 2.200˝ and 1.600˝ valves. We also used a CHI 4.0 intake and an 1150 Holley Dominator.

“For the valvetrain, we did a custom solid roller for it, T & D shaft rockers, Morel lifters, Smith Brothers pushrods, and a Rollmaster timing set. There’s no belt drive since we were trying to keep it a little modest.”

Once the machine work and assembly was complete, Smith took the engine down the street to make some dyno pulls using PennGrade motor oil.

“I try to push for Brad Penn, which is now PennGrade,” Smith says. “I’ve been using them since I started at the very first shop I worked for. That’s what they used and we did a lot of endurance engine work and everything that would come back for a refresh always looked great. PennGrade has worked and I haven’t strayed from it.”