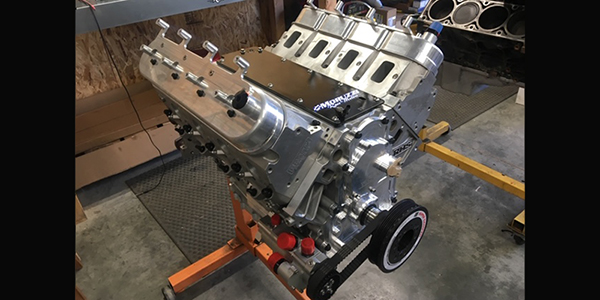 After a shop wanted to charge $1,500 just to tear down his motor and quoted him $38,000 for the rebuild, Jason Whipple of Whipple Motorsports went looking for a different engine shop to work on his LS7 engine. His search brought him to the doorstep of Moruzzi Race Motors in Banning, CA to do the rebuild. Find out what went into this LS7 engine for off-road racing.

After a shop wanted to charge $1,500 just to tear down his motor and quoted him $38,000 for the rebuild, Jason Whipple of Whipple Motorsports went looking for a different engine shop to work on his LS7 engine. His search brought him to the doorstep of Moruzzi Race Motors in Banning, CA to rebuild his LS7 engine for off-road racing.

Robert Moruzzi, owner of Moruzzi’s Race Motors, first found his passion for engine building due to his family’s racing background. Both his mom’s and dad’s side of the family enjoy racing and working on cars and engines.

“We’re all gear heads,” Moruzzi says. “My mom’s dad did circle track racing and dirt track racing. My dad and grandpa are both drag racers. As soon as I could hold a wrench I was working on cars.”

Right out of high school, Moruzzi got a job working for Chevy. His career there spanned 20 years – first starting as a porter, then doing oil changes and finally as a heavy-duty line technician building motors. Despite working on cars and engines all day, Moruzzi still had the energy to build engines on the side.

“My friends would want me to help them build their motors,” he says. “Before long, it got kind of serious and I started doing one a month and then it went to two a month. Pretty soon I had five or six engines at all times. After 20 years at Chevy, I went to my boss and said, ‘I want to do this full time.’ My boss said, ‘I’m all for it. I stand behind you. If it doesn’t work out, you can always come back.’”

Moruzzi took his engine building full-time in 2014 with Moruzzi Race Motors in Banning, CA. Today, he has a 1,200 square-foot shop that’s been getting busier and busier. Moruzzi relies on a local machine shop for his block work, but everything else is done in-house. He operates the shop along with his dad.

“My dad actually works for me doing head work,” he says. “It’s just me and my dad right now. We are busy enough to get more help, but it’s nice having the work pile up a little bit so we have a cushion. We do what it takes to get it done.”

One of those recent builds was Jason Whipple’s LS7 engine. After finding out another shop wanted to charge him $38,000 for the rebuild, Jason came to Moruzzi’s to discuss his options.

“The customer called me and said his motor blew up,” Moruzzi says. “Jason is a friend of a friend. We took it all apart, laid all the parts out, went through everything and took the block to the machine shop. The block was salvageable. They found one little lip on the main they had to fix. We explained to the customer his different options and what we could do with the engine and he went with us.”

Jason’s LS7 engine features an RHS tall deck block and is 442 cid. The main had to be de-burred by the machine shop because one of the rod bearings caught and put a groove in the block.

“Our machine shop line bored it and resized the caps,” he says. “We also bored and honed it with a torque plate. We put new roller cam bearings in it. We notched the block for the bigger crankshaft and surfaced the block.”

The heads Moruzzi chose for the build were off-the-shelf Brodix heads that, once in the shop, got a valve job, were ported and polished, and given triple valve springs.

In addition, Moruzzi used ARP studs throughout, Clevite bearings and for the valvetrain he used stainless Manley valves, Crower shaft-driven rocker arms and Crower solid roller lifters. The solid roller camshaft Moruzzi chose is from Cam Motion and is .689˝ lift intake and .701˝ exhaust lift. The duration is 242/258 on a 112-degree lobe.

“The engine is going in a Class 1 off-road race car that has a sequential transmission and 40-inch tires,” Moruzzi says. “The customer has already raced it and says it’s a killer set up.”

From what we’ve heard, we would have to agree. On to the next one!