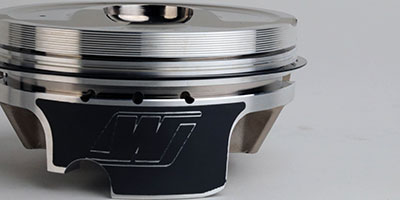 Piston ring packages are as carefully engineered as any high-performance part, but the “middle child” might be the most misunderstood. Here’s a look at the science that goes into second ring design.

The ring package has three primary goals: Keep pressure confined to the combustion chamber on both the compression and power strokes, transfer heat from the piston to the cylinder walls where it can be removed via air or liquid cooling, and control lubrication to limit oil consumption and unwanted emissions.

While it’s easy to look at the top ring or the oil ring at the bottom and intuitively understand their contribution to meeting these objectives, the second ring is more of a mystery. What’s it supposed to be doing, and why is it necessary? How do the materials used and physical properties of the second ring affect performance? To answer these questions, we turned to Wiseco Senior Technical Account Manager Alan Stevenson.

For our first question, we asked Stevenson whether the second ring had a role in containing compression or combustion gasses. “There was a time when bores were so bad in terms of surface finish, roundness, and so on, and ring materials were a lot worse, so that pistons used to have four rings; two for compression sealing, one for scraping oil, and one for pumping oil,” he explains. “The terminology hasn’t kept up with the technology. Referring to a contemporary second ring as a compression ring is a misnomer.”

So what’s the contribution of a modern second ring to combustion chamber sealing? Per Stevenson, “Negligible. There have been SAE papers published that prove how enlarged second ring gaps actually increase top ring sealing and power. Combustion sealing is 100% the top ring’s job.” Combined with other piston features, the second ring’s role in this respect is to keep the pressure in the crevice space between it and the top ring as low as possible, giving any blow-by that makes it past the top compression ring a way to quickly escape to the crankcase.

“An accumulator groove works in concert with larger 2nd ring gaps,” Stevenson explains. “In short, there will always be some combustion pressure leakage past the top ring due to secondary piston motion and cylinder cross hatch. Any pressure that makes it past the top ring tends to get trapped between the top and second ring, which then pressurizes the top ring from underneath which leads to ring flutter (especially at high RPM). The accumulator groove creates additional volume which decreases pressure. This is where Boyle’s law is applicable; volume and pressure have an inverse relationship, so increasing volume decreases pressure. Coupling this with larger second ring gaps provides a smoother transition of the trapped gas out of that space and reduces top ring flutter.”

Because the second ring is specifically intended NOT to be a pressure seal, it’s often constructed quite differently from the top compression ring. Stevenson says, “Many top rings have inside diameter bevels that cause them to twist opposite of the forces acting upon it in order to help keep it flat in the groove for better sealing. Second rings have a bevel opposite to that, so they actually twist the wrong way to help sealing.”

The Heat Is On

So, having established that the second ring is most definitely not there to provide compression or combustion sealing, what about the second main objective of the ring package – transferring heat out of the piston and out to the cylinder walls, where it can be managed by the cooling system? It might seem like the relatively tiny amount of contact the rings make between the piston and the bore couldn’t possibly be a significant route for heat conduction, but it turns out to be the major provider. Per Stevenson, “There are many variables here, but the rings transfer about 70% of combustion heat from the piston to the cooling system.”

The remaining 30% escapes via other routes, like radiation and convection cooling of the underside of the piston to the air inside the crankcase, conduction cooling through contact between the piston skirt and the cylinder bore, and heat carried away via oil splash from crankshaft windage. Some engines even employ oil squirters at the bottom of each cylinder bore that direct a spray of lubricant at the underside of the pistons specifically to aid in cooling.

Other sources of heat transfer notwithstanding, the ring package handles most of the load when it comes to keeping the piston at an acceptable operating temperature. Out of that previously mentioned 70% of total piston heat, “The top ring transfers 45%, the second ring 20%, and the oil ring 5%,” says Stevenson. While the second ring definitely plays its part in this critical task, it’s still not the ring’s primary reason for being there.

Oil Control For The Win

As it turns out, the second ring has a lot more to do with lubrication control than the oil ring beneath it. “The second ring is what scrapes the oil,” Stevenson explains. “The oil ring is what gathers it and pumps it away from the cylinder walls via oil return holes in the oil ring groove.” The second ring’s main function is to continuously remove excess oil from the bore – as the crank rotates, oil escaping from the pressure bearings on the rod big ends is constantly thrown up behind the piston, coating the walls of the bore.

On the downstroke, the second ring and the oil ring work in concert to clear all but a tiny amount of oil and return it down the bore to the sump. Stevenson says, “The top rings will always receive latent lubrication by oil trapped in the cross-hatch of the cylinder walls.” It’s that microscopic texture on the bore that retains just enough oil to keep friction between the ring package and the cylinder wall to a minimum, while the second ring prevents too much oil from making it up past the top ring and into the combustion chamber.

Now that we understand each ring’s purpose in the package, we can see why different specific materials and ring cross sections are often used for the top and second rings. “The overall best top ring material is steel,” Stevenson continues. “Now, granted, some steels are better than others, but as rings get smaller and specific output increases, the demands on the top ring (which sees the most abuse) are highest.”

Move down a groove on the piston, and the different job being performed places lower demands on the material being used. Per Stevenson, “Many second rings in racing engines are still cast iron or ductile iron. The second ring is not under enough stress and temperature to necessitate steel.” The shape of the ring profile also has a significant effect on how efficiently it removes oil, as well as how much friction it introduces, and both the interior and exterior diameters have a role to play. “Bevels are on the inside diameter of the ring and dictate the direction the ring twists to aid in scraping,” Stevenson says. Viewed in cross section, a beveled ring has one edge of the inside diameter cut at an angle – as Stevenson points out, this encourages the ring to dynamically twist in the groove as it moves down the bore and focus additional pressure on the outside corner, in order to more efficiently sweep excess oil away.

“Taper, Napier and steps are all variations of the outside diameter shape,” he continues. The goal with all these profiles is to concentrate contact into a narrow band to increase the efficiency of the scraping action. As the name implies, a tapered outer profile is narrower at the top than at the bottom, while a stepped ring profile has what looks like a notch in the cross section, oriented toward the direction of travel on the downstroke. A Napier ring is actually undercut at an angle or even hook-shaped on the outside diameter, further decreasing the contact area and providing space for scavenged oil to escape, away from the cylinder bore. “In order, the most efficient scraper is Napier, followed by step, followed by taper. Run a Napier if it’s available in your bore size and suits the groove in the pistons,” Stevenson concludes.

What kind of a combination you are running will also influence the optimum choice for your ring package, including the second ring. Stevenson advises, “Thinner second rings are more prevalent in dry sump engines pulling gobs of pan vacuum.” Because crankcase vacuum helps ring seal across the board, it’s possible to get the desired results without working the second ring quite as hard. “Naturally aspirated with no vacuum help should usually be 1.5mm or larger, while forced induction should err towards larger 1/16-inch rings,” he adds.

“Of course, this is all relative to bore size; you can almost think of it like a ratio of ring size to bore size,” Stevenson cautions. “A big boost, four-cylinder engine will control oil just fine with a 1.2mm ring, while a 4.600˝ bore big block would be happier with a 1/16-inch ring. There are also substantial variables in crankcase efficiency when it comes to oil control. Modern engines with deep-skirted blocks, segmented oil pans, windage trays, and crank scraping/scavenging all have an effect on how much oil is thrown up into the cylinders. The more oil present, the harder the second ring’s job is.”

As you can see, second ring design and engineering is a complex subject, but experts at Wiseco have the collective experience to provide you with sound advice for any need. While we can’t cover everything in a single tech article, we hope that what you’ve learned here will help you to better understand the ‘why’ behind a ring package’s specifications.

This article was sponsored by Wiseco. For more information, please visit our website at wiseco.com

What Does the 2nd Ring Really Do?