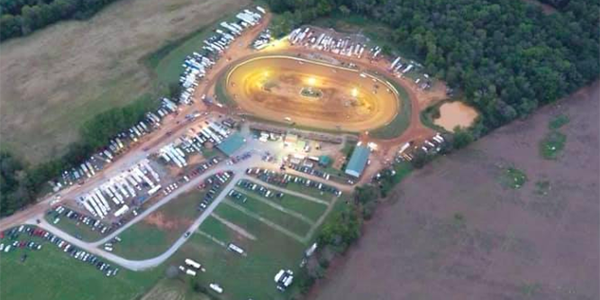 The 35 acre facility is located about an hour south of Nashville and an hour north of Huntsville, Alabama. It has been in operation since 1973 and was originally built and named Duck River Speedway by Sam Pugh. The track has a long history of producing some the nation’s most exciting races for fans and racers alike.

For over 40 years, the dirt racing community has gathered on Saturday nights at Duck River to witness local heroes and national dirt racing stars suit up to race. The racing roots run deep as families, friends, and foes have gathered at Duck River Raceway Park to support racing competition at its best.

Since 2012, Bob Harris has owned and operated the facility. Harris re-named the famed track to Duck River Raceway Park, and modernized it to meet the demands of larger crowds and bigger races. Harris made the much needed improvements to the speedway by building state-of-the-art bathrooms, remodeling the concession stands and adding dirt to the speedway.

It’s with heavy hearts that we announce the passing of motorsports icon Ken Block, who died Jan. 2 at age 55 following a snowmobiling accident. Hoonigan Industries confirmed the report in an Instagram post: Related Articles – NGK Spark Plugs Adds Jeffrey Schlenker as GM of Purchasing – Ralph Sheheen Among Inductees for 2023 National

The National Sprint Car Hall of Fame has announced its 2023 inductees, who will be honored on Saturday, June 3, for the 33rd induction ceremonies in Knoxville, Iowa. Among the names is SPEED SPORT’s Ralph Sheheen, who also serves as the host of PRI’s Grand Opening Breakfast.  Related Articles – MAHLE Aftermarket Elevates Delivery Performance

SEMA and PRI must share that despite strong Congressional backing and extraordinary support from the racing community, the 2021-2022 Congressional session is ending without passage of the RPM Act. Related Articles – Kyle Fickler Joins ProCharger – IHRA to Debut Motorcycle Class in 2023 – Belmont Abbey College Announces MBA in Motorsports Management Key negotiators