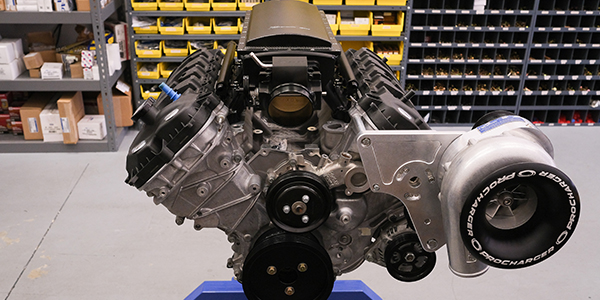 When Tim Eichorn was approached by Horsepower Wars about participating in the LS vs. Coyote Shootout for a chance to show the world what a Ford Coyote engine can do, there was no way he was about to say no to the opportunity. His shop, MPR Racing Engines, grabbed a junkyard F-150 core motor and squeezed every ounce out of their allotted $15,000 budget to create a beast of an engine. Find out how the build came together and how it performed!

A few years back, the folks at Horsepower Wars put together the LS vs. Coyote Shootout in which an LS3 and a Gen 1 Coyote squared off in a dyno challenge. With a pretty restrictive set of rules and a $9,999 build budget, there wasn’t room for the engine builder competitors to use any form of power-adder or even change from stock displacement or street-car-friendly parts.

That Shootout went pretty definitively to the LS3, but the folks in Coyote land weren’t throwing in the towel just yet. Some didn’t like the parts chosen and argued that the best Coyote builders weren’t tapped. To appease those naysayers, Horsepower Wars had a round two of the LS vs. Coyote Shootout, but this time with a little more power, fewer rules and two of the nation’s top Coyote and LS engine builders involved.

When Tim Eichorn was approached by Horsepower Wars about participating in the LS vs. Coyote Shootout for a chance to show the world what a Coyote engine can do, there was no way he was about to say no to the opportunity. MPR Racing Engines is a well-known engine shop that specializes in building Modular Ford engines. Eichorn has been messing with engines ever since he could drive!

“I had more of a passion for engine building than I did trying to get engines in and out of the cars,” Eichorn says. “Around 1995, I started building engines, but I didn’t have any machines at the time, so we were using local machine shops and whatnot.”

After spending 13 years at Mustang Specialties and learning to hone his engine building prowess, Tim decided to break out on his own in 2005, founding MPR.

“A gentleman named Frank Sirico, who used to own Exact Performance in Pompano Beach, FL, is the one who really got me into wanting to build engines,” Eichorn says. “He really pushed me into doing my own thing later on down the road.”

MPR’s first five years in business were up and down, until Eichorn was able to take advantage of several machine shops going out of business due to the economic downturn and ramped up his own shop’s machinery and capabilities.

“Around 2010, we had to start tooling up for ourselves for the machine shop end of it,” he says. “We’ve just been building the company ever since.”

Modular Ford engine work makes up about 80% of what MPR Racing Engines does. However, MPR is fully capable of building all kinds of engines.

With five full-time employees and 7,000 sq.-ft. of space, MPR is a full machine shop capable of doing everything in-house from balancing and cylinder head work to block machining, rod reconditioning and everything in between. In fact, Eichorn has plans to move the shop just down the street in Boynton Beach into a larger, 15,000 sq.-ft. facility so the shop can add more machinery and an engine dyno.

“That move is in the works right now,” he says. “We’re going to be finalizing all the details in the summertime and hopefully moving towards the end of the year.”

When it came time for the Horsepower Wars LS vs. Coyote Shootout, Eichorn knew he was up to the challenge, and found it to be a refreshing opportunity.

“It was actually a really fun project for the shop,” he says. “Everything about the whole project was really, really uplifting here at MPR because when you build engines it’s often the same engines a lot of times and it gets monotonous. This was definitely a break in the normal day procedures. It refreshed everybody.”

Helping to refresh everyone at MPR was a 304 cid Ford Coyote engine. The Shootout was based on three categories – horsepower and torque average, horsepower per cubic inch and overall peak horsepower – and the build had to be done using a $15,000 budget.

“We started with a 2015 F-150 junkyard truck core motor,” Eichorn says. “We used the block, the heads, lifters, rockers – pretty much everything. We took the crankshaft and added some Manley billet rods and some Mahle domed pistons. We balanced the crankshaft. We used a Procharger on it, so we double keyed the crank. We did a Darton sleeve conversion on it. We ported the stock heads. We put bigger Ferrea valves in there, and used some Manley springs and retainers on it. We got some custom COMP Cams camshafts for the blower and locked out the cam timing. Procharger sent us down an F1A94 and Holley sent us an EFI intake manifold.”

According to Eichorn, special machining was deemed part of the build budget, so MPR’s sleeve work and head porting ate up a chunk of the budget pretty quickly.

“We didn’t have much to work with after that, but we needed to do that in order to make any kind of power,” he says. “Unfortunately, the rules weren’t fair because the LS has a plethora of parts. We on the other hand, built this engine out of a junkyard F-150 truck motor. The LS build used an LSX block, Brodix heads and that kind of stuff. We basically worked with what we had.”

“We won the horsepower per cubic inch, but we were trying to shoot for the average horsepower,” he says. “We knew we couldn’t get the peak horsepower. I feel we beat them in terms of taking something that came out of a bone stock car and building it to make 1,300 horsepower, where they took aftermarket stuff and tried to build something for 2,000 horsepower.”

In addition to the LS being the easier platform to build, Eichorn says there were some issues on the dyno itself.

“The dyno operator didn’t know how to operate the blower engine,” he says. “It actually ended up breaking a secondary chain on the dyno, but it was on its way to making some really good power. It made 1,284 horsepower before it had some belts slip issues.”

The problem was that the rules allowed up to a 12-rib belt, but Procharger only makes an eight-rib belt for the Coyote, so MPR couldn’t get anything bigger than an eight rib, whereas the LS had a 10 or 12-rib belt.

“We kept having belt slips and belt breakage… but it ended up making 1,284 horsepower on only 25 lbs. of boost where we built the thing to go to 35 lbs. of boost,” Eichorn says. “I think in the end it probably would have made around 1,500-1,525 horsepower if it had been able to make that boost.”

According to Eichorn, the competition would have been more fair if the rules stated that both builders needed to use a stock block and a stock set of heads.

Hopefully the third installment of this Shootout comes with rule changes that make the competition a true head-to-head battle.

Advertisement
In this article:Elring, Engine of the Week, Ford, PennGrade Motor Oil