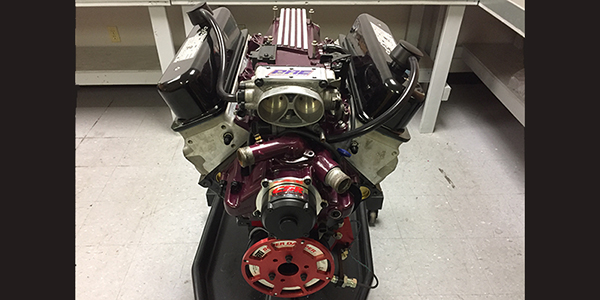 With a mechanical engineering background and racing in his blood, Brandon Page was destined to become an engine builder. The Clemson and SAM Tech grad opened Page Racing Engines just a year and a half ago, but has already been churning out engine builds like this LT1 NHRA Stock Eliminator engine. Find out what went into the build!

“I’ve been around drag racing my whole life,” Page says. “My grandparents and my dad raced, so it was only natural for me to be into racing. When I was eight, I started racing in juniors and traveled the whole East coast. Once I turned 16, I got myself a big dragster and have been running it ever since.”

While racing was always in Brandon’s blood, he got the engine building bug when he was just 10 years old. He wanted to become a mechanical engineer and attended Clemson University where he earned his degree. While there, he learned of the School of Automotive Machinists in Houston and immediately knew his next move would be there.

“I graduated from SAM Tech in November 2017,” he says. “Once I finished up out there, I moved back home to South Carolina and started Page Racing Engines on January 1, 2018.”

Page Racing Engines is a 5,000 sq.-ft. shop capable of doing everything in-house with the exception of grinding cranks and dynoing engines. The main focus of the shop is drag racing and high performance/street engine work.

To get the business off the ground, Brandon got some help from his parents and took out a few loans for equipment purchases.

“We’ve got two machines that we ended up buying new,” he says. “One is a new Rottler seat and guide machine. We had one of those at the School of Automotive Machinists and I just really liked the way it worked. The other is the line hone, which is new because I couldn’t find any used at the time. The rest of my machines are used.”

Page has been putting those machines to work over the last year and half, and recently finished up a build on an LT1 NHRA Stock Eliminator engine for a new customer.

“The build started out with a factory GM block,” he says. “It is a two-bolt block. That’s what the customer had, so that’s what we’re working with. We did put ARP studs in to strengthen that up as much as possible.”

Due to NHRA’s Stock Eliminator rules, Page was limited on the type of crank, rods and pistons he could use for the build.

“We have to choose from an approved list the NHRA gives, so we picked within that list,” Page says. “We used JE pistons, a Scat cast crank and custom Callies rods made to NHRA specs. We then went through and checked the block and got it machined to match the pistons.”

After torque plate honing the block, Page mocked up the rotating assembly to see where he needed to deck the block to in order to get the quench right, which the NHRA has a minimum amount for.

“The block is .040˝ over because the cylinders needed to be cleaned up from being worn,” he says. “Once we got that set, the block was decked and then we were ready for block prep, final cleaning and assembly.”

The LT1 engine also features stock aluminum heads, which Page was only allowed to do a valve job on.

“We can’t do any kind of porting to the heads due to the rules,” he says. “We can run whatever the minimum CC is based on the rule book. We can use any kind of valve as long as they’re a stainless valve. We’re using Liberty valves on this engine.

“The rocker arms and that kind of stuff has to be the stock style with a stud. You can’t use any kind of shaft rocker. They allow us to run solid roller lifters, so that’s what we used. The cam is unlimited other than a max lift that we can have. Everything else you can do whatever you want as far as duration and the valve opening. We used a Bullet Racing cam.”

This engine also uses an OptiSpark instead of a distributor, which is driven off the front of the cam.

“We replaced the cap and rotor with MSD parts, but the actual internals are still the stock Opti,” Page says. “One thing we found is it needs the upgraded rotor and cap because the factory one just doesn’t work as well. The factory water pump is driven off the cam gear, so we got rid of that and went to an electric water pump. Because it’s a distributor-less engine, we are allowed to run a crank trigger. That was one thing we’ve added to help stabilize timing and give better pickup instead of using the Opti. The Opti is mainly used for distributing the spark to all the plugs.”

To top off the build, the LT1 engine is using a Holley EFI system since the factory one is not up to the capabilities needed for rpm and tunability in this level class of racing.

All said and done, this LT1 NHRA Stock Eliminator engine should crank out more than 500 hp to the flywheel and features an 11.1:1 compression ratio. Time to go racing!

Advertisement
In this article:Elring, Engine of the Week, LT1, NHRA, PennGrade Motor Oil