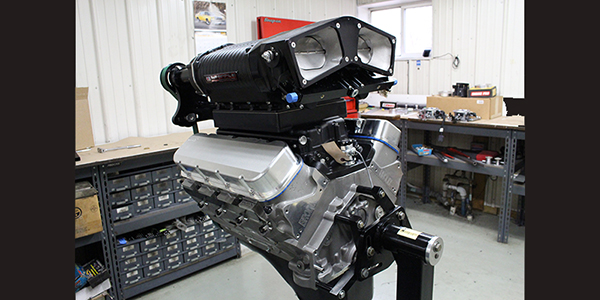 One of Baker Engineering LLC’s recent customers wanted a trophy truck engine with brutal power everywhere. They didn’t have much room on the sides or the front of the engine, but they had room to go vertical, so the shop used it’s background in marine engines to employ a twin Whipple set up on this big block Chevy engine. Find out how the build turned out, and how much brutal horsepower this engine cranks out!

Baker Engineering LLC, in Nunica, MI, is a precision machining company with a focus on the design and development of high tech, high performance technologies for a variety of applications from custom engines to engine components.

We recently caught up with Baker’s own TJ Grimes, who is in charge of performance sales for the company, to talk about one of their recent engine builds. TJ has been into cars and engines since high school. His grandpa owned a general repair shop and was big into hot rodding and that interest rubbed off on TJ. What TJ learned over the years snowballed into coming to work for Baker Engineering about 11 years ago.

“When I started at Baker I was doing chassis dyno tuning,” Grimes says. “That progressed into getting more technical on the engine side and doing some camshaft work and complete engine design through the years.”

Baker Engineering employs about 25 people and has a complete machine shop, CNC shop and multiple engine dynos at the facility where they do all engine work in-house – boring, honing, surfacing, balancing, assembly, valve jobs, porting – you name it.

“There’s pretty much nothing we send out, we do everything,” Grimes says. “We even build our own LS cylinder head for Pro Mod engines. Our primary focus was circle track engines and offshore marine. The circle track engine stuff went away with crate engines, so we’ve switched focus a little bit to street/strip engines and drag racing engines. Primarily what we do now is LS engine builds. We still do some big block offshore marine stuff and we still do some circle track stuff.”

According to Grimes, the biggest part of the business is actually military engine research and development for the Army, Air Force and Navy, in all different phases.

“The customer wanted something for a trophy truck that had brutal power everywhere and was something that stood out because it’s going to be a little mix of race and show,” Grimes says. “Because of that, the engine is nicely appointed inside and out.”

The 540 cid big block Chevy features a 4.500˝ bore and 4.250˝ stroke. Grimes started the build with a Brodix aluminum tall deck block since he knew it would be pretty reliable in the 2,000-plus horsepower range.

“We did a tall deck on it so I had room to get a lot of pin height and get the rod length I wanted,” he says. “It’s set up for a .937˝ lifter and has a raised 60mm billet cam. The basic duration is probably about .275˝ to .280˝ at .050˝ – nothing crazy as far as a lobe lift or anything like that. We’re only in the .475˝ arena. The emphasis there is we wanted good reliability for an endurance application.”

The shop used Brodix BB-2 X heads, which are hipped for reliability with big boost. The crankshaft is a fully center-counterweighted, billet Callies crank. Grimes also used Callies steel Ultra I-beam rods. A steel rod was picked because the horsepower level is not super high and the customer won’t have to worry about cycling out parts.

The pistons are Diamond pistons based off of a Pro Mod Alcohol piston. For the valvetrain, Grimes used Xceldyne intake valves and Manley severe-duty Inconel exhaust valves. The springs are PSI and the retainers and locks are Xceldyne. The big block Chevy also got Trend single taper, half-inch pushrods, a Jesel belt, Total Seal piston rings and a Holley Dominator EFI.

“We sort of built this thing like an offshore marine engine,” Grimes says. “The build was pretty straight forward being the big block Chevy architecture and because we’ve done so many marine engines in the past, everything went together really well. The machine work on the block is pretty minimal after getting it from Brodix set up with the .937˝ lifters. But we hone the lifter bores to size to match them up with the Crower lifters, and then we completely deburr the block. Clearance-wise, with that little 4.250˝ stroke and a raised cam in a big block, you’ve got a mile of clearance, so everything went together real nice on it.

“The twin Whipple idea came along from the Mercury racing engines with twin Whipples, so we were familiar with the package and how it looked. There wasn’t a lot of room externally around the engine on the sides or the front, but he had the room to go vertical with it, so that’s how we landed with the twin Whipple. It looks stellar and makes real good power.”

“The engine is currently set up to make about 2,000 horsepower on the short runs and about 1,400-1,500 horse for endurance running,” he says. “With the Holley Dominator EFI, the customer will have four switchable tunes on it, and the engine is running on e85.”

If you’re anything like us, you’re feeling a little envious of this customer’s new engine!