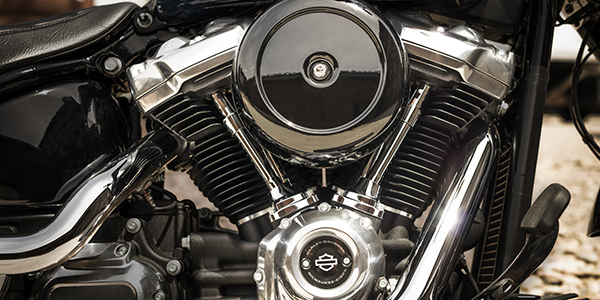 At its peak, the market was booming with new bikes, ATVs and UTVs flying out the door almost as fast as the dealers could get them in. Nearly 1.8 million powersports units were sold in 2006, according to the Motorcycle Industry Council (MIC). In 2018, the number of new units sold was down to 661,000.

The powersports market is not what it used to be right before the “big economic downturn” hit in 2008. At its peak, the market was booming with new bikes, ATVs and UTVs flying out the door almost as fast as the dealers could get them in. Nearly 1.8 million powersports units were sold in 2006, according to the Motorcycle Industry Council (MIC). In 2018, the number of new units sold was down to 661,000.

MIC doesn’t calculate UTV sales, but we estimate that to be the most active segment at 450,000 – 500,000 units per year. All in, the overall industry is down. And one of the biggest industry hardships is hitting close to home for some engine builders. Harley-Davidson has been dropping in the sales column for the past few years, and it doesn’t look like there will be a turnaround soon.

One of the reasons that Harley’s numbers are declining, and in fact, most manufacturers numbers are, is the lack of new riders and the aging out of seasoned, veteran riders (i.e., baby boomers). However, the used market for Harleys has been good because the bikes hold their value and haven’t fundamentally changed in years.

After a nearly 20 year run with the Twin Cam engine, the Motor Company rolled out a new mill for 2017 called the Milwaukee 8 (M8). While Harley’s warranty was for two years, early adopters of the M8 are starting to expire and are looking for performance engine work.

Charlie Lawlor, the owner of Shortblock Charlie’s and Pro 1 in Tempe, Arizona, says that his bread and butter work is still with the Twin Cams. “The Harley market for performance heads is still strong with the Twin Cam engines, says Lawlor. It’s doing quite well even though H-D quit making them in 2016. There are a lot of them on the road since it was one of the biggest selling engines Harley ever had. It was introduced in ’99 and was replaced in 2016.”

After 18 years, H-D introduced the Milwaukee 8 for its 2017 model range to replace the venerable Twin Cam. The engine was a big step forward for the company featuring performance out of the box with 4-valves per cylinder. Lawlor says he owns two new Harleys with the M8, but he’s afraid to tear into the 2019 bike until the warranty expires.

“The M8 market is a strange one,” says Lawlor. “You’ve got two problems: one is the warranty thing that we’re concerned with, and if you do hop one up you’ve got to reprogram the computer (When you hop up a Harley or any other bike that’s fuel injected, you’ve got to program the fuel injection.). Well, Harley is now flagging it so that if you do any reprogramming, it might void your powertrain warranty.”

H-D got into a little trouble with the EPA a few years back when it had its version of the Powercommander in the Screamin’ Eagle line. Now the Motor Company wants nothing to do with reflashing – especially for performance tunes.

The other problem Lawlor says is affecting performance work on the new Harley’s is that money is tight for many of his customers. He says the kids who are riding today don’t want to hop anything up as the old guys have done in the past. “It’s just not like it used to be,” says Lawlor. “To do the heads on the M8 is a lot more money because you’ve got two more of everything. The labor on the heads to do the porting, you’re talking $1,400 where you can port a Twin Cam for $700.”

Lawlor also says they don’t see much work for the other American motorcycle brand – Indian. “We don’t do much work on Indian Motorcycle engines; they’re a damn good motorcycle,” he admits. “I had a guy send me a set of heads to port. He wanted me to design some valve seats, and I have a Newen machine, so I did the bowls. But that was the only set of heads I’ve ever done for an Indian. It wasn’t cheap either.”

Manufacturers such as Harley and Indian have taken some of the thunder from performance shops because they are offering big bore kits from the factory that include a warranty, which adds another wrinkle into the mix. But according to Lawlor, his business is evolving, and there’s still enough older machines out there to keep him busy.

“We’ve changed direction quite a bit as we are now more involved in vintage motorcycles,” Lawlor reveals. “More people want to restore old Hondas and whatever, and what we do is offer vapor blasting. It’s becoming a big business for us. Customers send us cylinders and engine parts that we vapor blast, which is like a liquid bead blaster that polishes parts and makes them look brand new.”

Lawlor has also added other services to the menu that are more in demand today because older parts are difficult to replace. “We got involved with Isotropic Finishing, and that’s been another home run. We polish transmission parts, which is especially popular for vintage motocross applications where you can’t get the gears anymore. We polished the transmissions to help save them. The parts look like chrome afterward. And it’s more durable.”

MPH, located in Peninsula, OH, has been in business for 20 years, and owner Doug Duane says he’s seen the industry and his customers change quite a bit in that time. He started as a road racing operation while he was running the AMA Superbike series for many years, but the market shifted after he stopped racing professionally. “Nearly 60% of our business is on Harleys and street bikes as well as metric cruisers,” Duane points out. “We do everything from basic services such as tire changes and diagnostics to full custom built 26-inch wheel baggers. And then we get into turbos, nitrous and big bore kits.”

One of the primary bikes for a big bore kit is the Suzuki Hayabusa. These bikes are already fast in stock form, but MPH makes them even faster. “We offer several Hayabusa packages from mild to wild,” says Duane. MPH does so much Hayabusa engine work that he says there are almost too many combinations to list.

The company offers big bore kits for ’99-’07 Hayabusas in 1363cc, 1397cc, 1430cc and 1464cc overbore sizes. These engines make between 185 – 234 hp and can run on pump gas, which Duane notes is about the maximum for a street build. For 2008-up Hayabusas, MPH has 1441cc and 1475cc big bore kits. These engines typically produce between 220hp – 245hp and use many aftermarket internals as well as a billet clutch basket for additional strength. The overbore kits are all Nickel Silicon Carbide plated after the boring procedure is complete.

Going to a full-blown Stage 5 kit can produce some significant horsepower increases, but also the engine needs to run on race gas. MPH Stage 5 kits come with a billet stroker crank and a billet 5mm overbored block. Displacements start at 1580cc and go up to 1720cc and can pump out well over 260hp. The engines for this stage consist of 90% aftermarket parts except for stripped cases and bare head. Duane says to build one of these animals; racers are “looking at a starting price of more than $12,000.”

One of the biggest obstacles MPH faces is when guys spend the money to build an engine but then won’t pay for it to be dyno tuned. “If you build a motor and you spend the money putting all these pieces and parts in it, and if you don’t tune it, you’re missing the boat,” Duane asserts. “And I get people who do that all the time. They’ll put $2,000-$3,000 worth of parts in the engine but won’t tune it, which is maybe only an additional $300 worth of investment.”

Although some shops may specialize in building bike engines or have the capability to do them in addition to automotive engines, MPH specializes primarily in modern high-performance bike engines. They sometimes work on a car project during slower times, but the focus is on bikes with electronic fuel injection. MPH doesn’t work on ATVs or UTVs and doesn’t work on vintage motorcycles with carburetors either. It’s strictly the newer electronic stuff, according to Duane.

“We’re leaning towards 2000 and newer bikes today,” Duane explains. “The older stuff doesn’t have the availability of parts, and the price to build them versus the value of the bikes is a factor. We get a lot of calls to work on carbureted bikes, but it’s just getting to the point where we’re moving away from it.”

It comes down to dollars and cents, and it doesn’t make sense for MPH to spend hours on a bike that may cost more in labor than it’s worth.  “Every single one of these [carbureted] bikes, you’re talking six, eight, 10 hours to get through it.” Duane figures. “All of a sudden you hand a guy $1,000 bill for doing his carburetors on a $1,500 bike. Nobody’s happy at that point.”

Duane says MPH invests thousands of dollars in equipment and training to be able to dyno tune and work on all of the modern bikes from Harley-Davidson to Ducati. They have a dyno room that is state-of-the-art with two computer screens so they can monitor the engine and tune the fuel map simultaneously. The fans circulate fresh air at just the right CFM for the most accurate readings. Having worked at dealerships in the past, Duane is very detail oriented from the dyno room to the industrial epoxied floors with the company colors swirled in. The dyno room even has a viewing area with soundproof glass so customers can watch the tuning in action. The showroom and retail area look inviting to customers and gives the sense of the work they perform.

“We’ve always based our whole plan around service,” Duane reasons. “No matter what happens, this is always a luxury item. Nobody needs a motorcycle. But if you do have a motorcycle, you’d go out and buy our part. You can’t go and gret a technician online to fix your bike. Right? So, we’ve always focused on that part of the business, that has always served us very, very well.”

The internet has affected everybody in business to some degree. Sometimes it allows a small shop to expand their reach into a broader market, and other times it drives prices down to the lowest common denominator. Duane says that with ECU tuning, the latter is true due to people sending their computer to shops that will reflash the units without the necessary bike specific dyno tune.

Shops that don’t specialize in motorcycle electronics can get lost in a hurry, according to Duane. “With some of the ECU flashing software, there’s already built-in triggers for nitrous and outputs for shift kills and shift without lift. There’s an auto ‘blip’ feature now on the 2016 and newer bikes that don’t offer it from the factory, but you can add it in with the editing software,” he explains. “It’s a different world now than when I was racing. And it’s a lot of electronics. If you don’t specialize in it or you don’t keep up with this stuff, some shops are just getting lost.”

Markets: Grassroots Racing and the Future of Motorsports