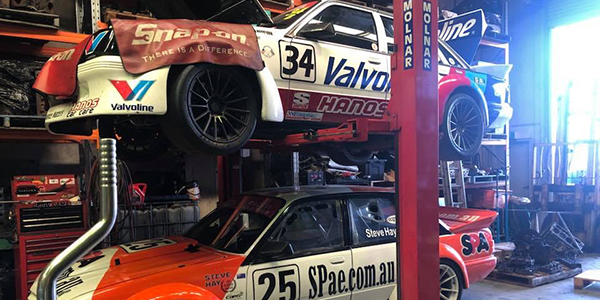 Over the years, we’ve heard from a number of engine builders here in the States who do a lot of international business with Australian customers. But what about the engine builders actually in Australia? What engines are they working on and what racing series do they support? We caught up with two Australia-based engine builders to get an inside look at their shops and a taste of the industry down under.

When you think of Australia, it’s hard not to picture the unique wildlife, the Sydney Opera House and scenes from Paul Hogan’s “Crocodile Dundee” movies. While the average person not living in Australia might drum up those thoughts, those who know a bit about the country’s rich motorsport history will be picturing rally racing, V8 Supercars, Sprint Cars and offshore boat racing.

There are few spectator sports in Australia quite as popular as racing, and for good reason too. With a number of different racing divisions and an almost 100-year history behind racing in the country, many people head out to the tracks for heart-pounding race action.

One of the leading racing series these days is V8 Supercars. It has corporate sponsorship and mainstream television coverage, however, in recent years it has been on shakier ground, but still has strong support.

Muscle Car Masters is another racing series with some popularity where cars of the ‘60s, ‘70s and ‘80s race one another. 410 Sprint Cars is the top level of speedway racing in Australia. Dirt track racing is strong at the moment too, due to its affordability. Other racing series include circuit racing, drag racing, targa rallies, drifting, hill climb, and historic race series. There’s no shortage of competitive spirit, that’s for sure. With all this racing comes a lot of engine building!

Over the years, we’ve heard from a number of engine builders here in the States who do a lot of international business with Australian customers. But what about the engine builders actually in Australia? What engines are they working on and what racing series do they support? We caught up with two Australia-based engine builders to get an inside look at their shops and a taste of the industry down under.

“I feel Australia has some exceptionally talented engine builders and automotive machinists, up there with the best of the best,” says Chris Morus, owner of Elite Engine Building PTY LTD in Blackburn, Victoria. “Australia has contributed a lot of talent to the automotive industry. Us Aussies have always contributed across the board.”

Getting into the Industry

Chris Morus first got into engines as a youngster, and was interested in making things go fast. He completed several automotive courses and an apprenticeship at a top machine shop in Melbourne where he caught the engine bug for good.

“After almost 10 years working on modern, mainstream two-stroke, light and heavy diesel, passenger and high-performance engines, followed by another 10 years working on veteran, vintage and classic engines; in 2017 I decided to start my own business,” Morus says. “It enabled me to combine my love of vintage and veteran cars with American classic, muscle and race engines.”

Much like Morus, Scott Trappett of SP Automotive Engineering (SPAE) in Deception Bay, Queensland, Australia, also had engine building in his blood from a young age. His dad Phil was an engine builder and machinist, and when Scott left school, it was a given that he would follow in his footsteps.

“My dad started a business called Auster Engine Centre,” says Scott Trappett. “I joined the team after high school and completed my machining qualifications. My dad has since sold the Auster business and opened a business in the adjoining building called Hardcore Performance where he concentrated on performance engine building. After a few years, and with children on the way, I decided to venture out in partnership with my dad and we created SP Automotive Engineering.”

“I specialized in engine builds for veteran, vintage, classic, muscle and race cars. Given the young age of the business, I’m not fully equipped. I do outsource most of the basic engine reconditioning, boring, honing, crank grinding, etc. I’m pretty well equipped for the manufacturing of the required components and I hand build every engine. My plan for the future is to expand the machinery so I can do everything in-house.”

SPAE is on the other end of the spectrum. The shop has a lot of machinery and is capable of doing all machine work in-house, enabling the Trappetts to have full control and oversee all tasks being done.

“We machine and build all kinds of engines including: motorcycle engine components, Yanmar and Kubota heads, cranks and engine blocks for forklifts, LS engines, small block and big block Fords and Chevys, as well as other four, six and eight-cylinder engines, Sprint Car engines, and diesel engines.

Much like the state of the Australian racing scene, the engine building and rebuilding market has been in full stride for a long time. Both Elite and SPAE have been as busy as ever.

“The aftermarket engine building going on around the country is very strong and nothing short of amazing,” Morus says. “Whether it’s street cars, classic cars, muscle cars or race cars (old and modern), there seems to be plenty going on. For the 13-odd years I’ve been building the older engines, I’ve been pretty well booked up. I’ve never had to go out looking for work. Given our population, I would say it’s been strong for a long time.”

Just as it is in the U.S., there are politics beginning to threaten the existence of performance engines and vehicles in Australia. However, the nature of motorsport and everyday driving in Australia is different than here in the U.S.

“Australia is very spread out, and we have a lot smaller population compared to America, so road transport and traveling is very important,” Trappett says. “Put simply, our country is too big and spread out for us to go full electric, and the importance of motorsport is engrained in Australian culture. There is always government putting pressure on the car industry, in particular, motorsport activities and the performance car industry. It does cross your mind that there could be a day where motorsport is no longer in Australia. I don’t think the government could do this though as there are too many families that survive on this industry as well as car companies who use motorsport and the personalities involved to help sell their products.”

While the threat looms, shops like SPAE continue to see strong support for its services.

“We have about six months of work booked at any point in time,” Trappett says. “We offer services for the regular car enthusiast and racer all in one place that not many other shops offer. It is a constant flow.”

Outside of its regular customers, SPAE sponsors a road course racing series called the Queensland Touring Car Championship. The shop builds engines for a number of competitors in this series, including multi-time winner Steve Hay and his car ‘The Big Banger.’

“We have a passion for helping the ‘little guy’ and everyday budget racer and car enthusiast,” Trappett says. “We enjoy getting to see hard working guys get to go and have fun with what they are passionate about. We could chase work with the top level of V8 Supercars, however, that is not really of interest to us at this point in time. We also build a number of speedway engines each year, mainly 410 Sprint Car engines. We would like to grow the speedway engine side of things in our business purely because you can count on speedway engines to get a freshen up once a year, whereas street cars and classics are usually a one-off build.”

As mentioned earlier, Muscle Car Masters is a popular racing series in Australia, and it’s one that Elite Engine Building is looking to get further involved in.

“The series covers original race cars from the early 1920s through the 1990s,” Morus says. “It usually has massive fields of entrants, runs at several tracks around the country and makes for a fantastic weekend of racing. We usually have a few engines running, so it can be stressful too.”

With cars in Australia running engines from all decades, from the 1920s to today, engine builders in Australia often see certain common issues amongst the engines they rebuild.

“Engines from the early 1900s to the 1940s rarely come in complete,” Morus says. “They are almost always in pieces and generally the parts are not off one engine, but rather a collection of components from multiple engines. Corrosion or erosion on these engines is a huge issue. This can be easily fixed with vacuum impregnating resin (referred to here as loctiting) and a couple of good coats of glyptal red engine enamel, but you need to be aware of the issue first. Welding of aluminum or cast iron of this era is not recommended. It will usually open up a can of worms that leads to an unusable casting. Instead, cold stitching is the only method I use to repair damaged or cracked castings of this era.”

Oil leaks are another common issue with this era of engine. It used to be acceptable for your car to leave big puddles of oil on the ground. To fix these oil issues, it usually means extensive modification/machining to the crankcase.

“Carrying out the work to reclaim these style of bearings is very labor intensive and there aren’t too many shops here in Australia that can do it,” Morus says. “I haven’t come across too many white metal engines that can’t be converted to modern copper/lead composite slipper bearings using either main or con-rod bearings from a modern engine. This allows for a much more robust style bearing and a much longer engine life expectancy.”

These early engines also face issues just due to their sheer age. You can’t buy parts for most of these engines. Instead, engine builders are left having to make parts.

“It is not unusual for me to machine up camshafts, chain sprockets, all sorts of different shafts, gears, head studs, main studs, valve guides, valves, etc.,” he says.

Engines from the late-1940s through to the late-1950’s can be very hit or miss. A lot of corners were cut on maintenance throughout these years. Corrosion and erosion are still an issue, oil leaks are still an issue, but parts are getting easier to get for engines of this time. Bearing material can still be an issue, even though slipper bearings were getting introduced, by-pass oil filtration was starting to get introduced. Costs for rebuilding come down to what the specific engine is.

“Most certainly, engines only get easier from here on in,” Morus says. “Quality bearings are common, full flow oil filtration, hi-tensile strength bolts were mostly standard. The only issue’s I really come across with these engines are the amount of times they have already been rebuilt. Other than that, aftermarket parts are usually readily available and affordable.”

While the racing series and engine types in Australia may be slightly different than in the United States, engine builders down under are largely experiencing similar things. As the world continues to become a smaller place with more and more engine builders doing international engine work, that line differentiating countries from one another will keep blurring. But, the passion for this craft is something that won’t change.

“I truly love what I do, I couldn’t imagine doing anything else and I will be doing it until I die,” Morus says. “I also could never imagine doing it in any other country than Australia.”

Engine Building Down Under