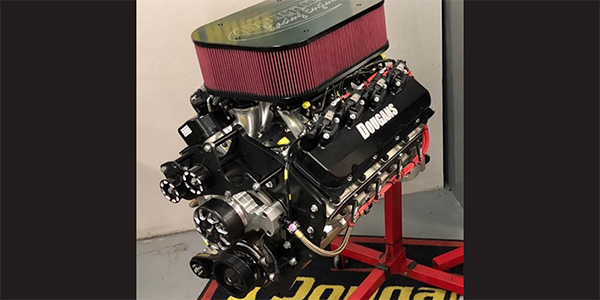 Everything about building trophy truck engines is difficult. The courses are extremely rough, the racing is very intense and the demands on the engine are nothing short of punishing. Due to these race circumstances, Ray Field and the guys at Dougans Racing Engines build a 555 cid big block Chevy engine with custom components from bottom up. Find out how this top-level build comes together.

Engines for off-road racing and trophy truck series such as SCORE or Best in the Desert have to be built stronger and more resilient. No one understands this better than the folks at Dougans Racing Engines. Long running times at maximum rpms in hot, dirty racing conditions, pushing a 6,500-7,000 lb. truck with 40-inch tires that are constantly loading and unloading, all make building a trophy truck engine a next-level endeavor.

The closest comparisons to off-road racing would be 24-hour endurance racing or offshore boat racing. However, when you really look at the similarities, those engines are truly child’s play up against a trophy truck engine. Trophy truck engines require attention to detail – many details!

“That is what turns me on about it,” says Ray Field, owner of Dougans Racing Engines in Riverside, CA (The shop is currently working on moving into a new facility). “It’s the small details that make the difference.”

Dougans was founded by Terry Dougan, who started the business in 1980. Ray Field was just a 16-year-old kid at the time, who got a job at the shop doing teardown, cleanup, sweeping floors and scraping gaskets.

“I was heavily involved in auto shop as a freshman and sophomore in high school,” Field says. “I started at Dougans on a work program through school. I have now been with Dougans for four decades.”

In 1998, Terry Dougan passed away from cancer and Ray was asked to manage the business. In April 2003, Ray bought the business from the Dougan family.

“At that time, we were involved in many different styles of racing – stock cars, drag boats, drag cars, street cars and hot rods,” he says. “In 2005, we built our first trophy truck engine. Since then, we’ve grown our presence in off-road tremendously. Today, we are all off-road racing engines, and between the SCORE series and the Best in the Desert series, we build, maintain and track support as many as 30 to 40 trophy truck teams.”

Dougans Racing Engines recently had six trucks race at the 2019 Baja 500, including the winner – all using its engines. The shop’s premier trophy truck engine is a 555 cid big block Chevy.

“Nothing in this industry puts the amount of abuse on an engine that off-road racing does,” Field says. “One of the things that is tough on these engines is the extended period of time in which they run at each race. They run between four and 25 hours at a time without a valve lash, with no maintenance whatsoever. Dirt ingestion is also a natural part of off-road racing. No matter how good the filter is, there’s always a certain amount of dirt ingestion. Along with the dirt ingestion comes minor valve recession. Then you have the loading and unloading that happens in an off-road vehicle, which is the most difficult part of these engines. Every time it loads and unloads, the pistons and rods are trying to stretch apart from each other. It’s trying to break the pistons, pins, connecting rods, bolts and crankshaft. It’s hard on timing components too because of the loading, releasing, loading, releasing.”

Everything about building these engines and trucks is difficult. The courses are getting rougher and rougher, and the amount of money and effort being spent to prepare for these races is becoming more and more advanced. Therefore, Dougans’ 555 cid big block Chevy has custom parts from bottom up. These are eight stack injected engines with custom air filter assemblies and a lot of fancy stuff inside.

“The key for us is building custom components for engines, electronics and all accessories related to it,” Field says. “It’s the actual mixture or recipe of the proper amount of components to get the proper finished product that, in my opinion, makes or breaks whether you’re going to get a winning combination or not.”

To start, Dougans uses a custom Brodix aluminum block. The shop will ask Brodix to put threads here, holes there, add material here, remove it over there in order to meet its specifications.

“We custom machine the block,” he says. “All the finish work is done in-house. We do the line honing, cam tunnel honing, lifter bushings, pressure test, finishing the cylinders, finish the decks, detail work, tapping all the holes, sizing lifter bores, and a restrictor program. All of that work is done to the blocks here in-house.”

The crankshaft is also a custom component from Sonny Bryant that has been strengthened in areas Dougans found to be weaknesses. The connecting rods are from Carrillo, which were custom designed to meet Dougans’ needs, and the pistons are custom from CP as well.

“The Brodix cylinder heads we use have our own port program,” Field says. “The heads are completely finished in-house. We have bare castings that we install our own custom valve seats, custom valve guides and we finish hone the guides, finish valve jobs, surface cc and assemble the cylinder heads all in-house.”

The truth is, anybody can buy the parts in the engines Dougans builds, but what separates Dougans’ engines is the quality control of those components, the modifications, the finish machining techniques, and a very stringent process which allows the shop to control all aspects of its engines.

“That is the key,” Field says. “The engine has to accelerate properly, idle well, never die, and run at high speed for a long period of time without hurting the engine. The demands are immense. It’s like nothing you’ve ever seen!”

To aid those demands, Dougans also employs MoTec components, which the shop is able to monitor and adjust any way it wants.

All said and done, these 555 cid big block Chevy engines crank out 1,000 HP, 850 lb.-ft. of torque and typically have a compression ratio between 12 and 13:1. Bring on those harsh racing conditions!