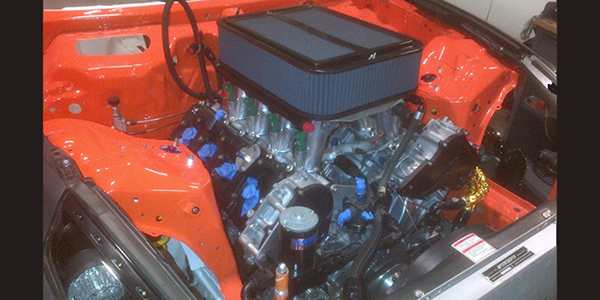 Using a VK56 Nissan V8, which was originally an off-road truck engine, the guys at AHM Performance changed up some key aspects to turn it into a nitrous-injected Formula Drift engine for Chris Forsberg’s NOS energy drink Nissan 370Z. Find out what went into the build.

Chris Crossont started working at his dad’s engine shop, AHM Performance, in seventh grade, scraping gaskets and crud off of engine blocks and heads for $1 an hour. From there he knew engine building was what he wanted to do.

“I grew up engine building,” Crossont says. “I would eat, sleep and breathe cars. It was the same for my younger brother Tom. That’s how we got hooked into it. After scraping gaskets, I progressed into learning how to run the machinery, doing valve seats, reconditioning rods, boring blocks and much more. From that point, I knew that’s what I wanted to do. I’ve been here pretty much my whole life.”

Chris’s father Chester opened AHM Performance in Rosedale, MD in August 1979. The family run engine machine shop is coming up on its 40th anniversary this summer, and business is better than ever.

“We started out doing standard rebuilds, but as time went on, we got more and more into performance and race engines,” Crossont says. “Now, we might see a grocery getter engine once in a blue moon, but pretty much everything has turned to racing and high-performance engine work. Of late, we’ve been doing a lot of stuff for other specialty shops.”

AHM Performance focuses mostly on automotive and truck engine work, but will occasionally take on a marine job. The shop does diesels, Subarus, Volkswagens, Fords, LS and Chevy, and Nissan engines for street/strip, drag racing, drifting, and off-road applications.

AHM consists of Chris, his brother Tom, his dad Chester and two part-timers. His mother Jean has also lent a hand on the business side of the operation through the years.

Not too long ago, AHM Performance was asked to be the engine builder for Chris Forsberg’s NOS energy drink Formula Drift car, a Nissan 370Z.

“For three years, we were doing the V8 Nissan engines for Chris Forsberg,” Crossont says. “The base engine was a VK56, which was originally designed for Nissan’s off-road truck. However, Nissan bailed on it, and Forsberg and the guys at MA Motorsports bought the whole ball of wax from them. They got all these engines and decided to go ahead and run them on nitrous.”

AHM got the engines in-house and were tasked with changing them from off-road competition truck engines into higher rpm, Forumla Drift nitrous engines.

“We just did some good solid machine work and put them together,” he says. “We went through and oversized the bores to 3.875˝. We honed the block and touched up the seats. We redid the piston design and the ring pack and altered a few other things for the nitrous set up. We also redid some stuff on the heads and with the cam timing.”

Another big change the shop made to the engine set up was added a better timing system. Due to the high rpms these engines run, the factory set up wasn’t going to cut it.

“I have to give a lot of credit to the guys at MA Motorsports because they got these engines dialed in on the tune,” he says. “We were having some pretty good success. Forsberg would go through the season with maybe two engines, with nothing more than new rings, bearings and maybe a touch up on the cylinders.”

“I was really worried about the nitrous working, especially with drift,” Crossont says. “In a drag car, you have a constant rpm rise. In drift, you’re on and off the throttle constantly. I was just really worried about the nitrous working with that, but it did, and it worked very well. The biggest attaboy goes to the tuners. We built these engines to stay together, but they definitely got all that to work and I was pretty impressed with how it all went.”

All said and done, these V8 nitrous Nissan drift engines made around 1,000 horsepower, and in the three years AHM Performance built Forsberg’s engines, he won the Formula Drift championship twice – 2014 and 2016.