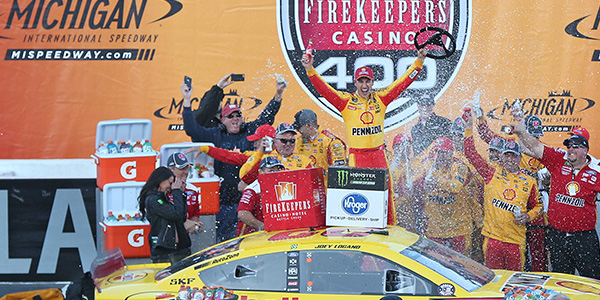 “Congratulations to Joey, Roger and the entire No. 22 crew,” said Doug Yates, President and CEO of Roush Yates Engines. “Joey drove an amazing racing, keeping the No. 22 Ford Mustang out front for the majority of the race! We say it all the time, but it’s true, it’s a privilege to be part of the Ford Performance team, to support Ford Motor Company and provide the power to these Ford Mustangs every week. To win the pole and race in Michigan, in Ford’s backyard, is extra special to achieve this for the Ford family.”

After starting from the pole position on Monday night, Joey Logano won the first stage of the race, proving the No. 22 would be hard to pass, on his way to leading a race high 163 laps out of the 203-lap race.

As a late race caution took the race into overtime, Logano proved once again to be the leader of the race in the two-lap manufacturer’s shootout. Logano took the lead on the restart and never looked back as he took the checkered flag .147 seconds ahead of Kurt Busch to clinch his 23rd career victory.

“It feels so good,” commented Logano, when asked about the win in Victory Lane. “Winning at Michigan means so much to Team Penske and Ford, being able to pull into this victory lane and see everybody means so much. A day like that, you don’t get all the time, best car, best team, we executed perfectly all the way through and ultimately to bring this Shell Pennzoil Ford into victory lane. I just can’t thank everyone at the shop enough, everyone that built this thing Roush Yates Engines, Money Lion, SKF, everyone that helps out during this whole thing.”

“It is easy to say that the Mustang has dominated MIS this year so far,” commented Pat DiMarco, NASCAR Program Manager, Ford Performance when asked about the team collaboration in post-race interview. “Kudos to our teams, collectively and collaboratively for developing the Mustang, along with our Ford Performance aerodynamics team and of course Roush Yates Engines. That is a common denominator to our success here among all the teams. We have the best engine in the garage and that power under the hood is a huge part of our team successes.”

Advertisement
In this article:NASCAR, racing