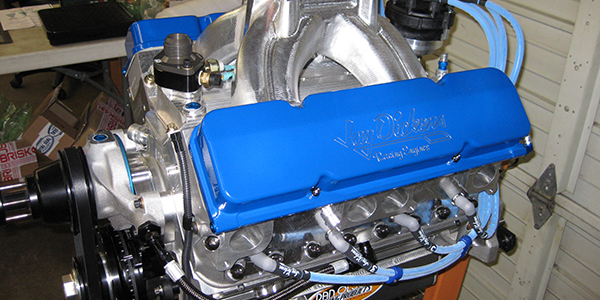 According to Jay Dickens of Jay Dickens Racing Engines (JDRE), he’s never seen a better running engine than his 4.400˝ bore space small block Chevy race engine. And there must be something special about it, as more than 75 race teams trust JDRE with their engine builds. Find out what goes into this 432 cid small block Chevy build!

As a teenager, Jay Dickens was very interested in race cars and engines. It didn’t hurt that his high school automotive mechanics teacher was one of the best race engine builders in the country, and built engines for Bobby Allison and several other big-name racers of the time. Unfortunately, Dickens’ teacher, Bobby Brown, was killed in a plane crash in 1987, but the things Jay learned from his teacher live on at his engine shop, Jay Dickens Racing Engines, located in Aberdeen, MS.

“I graduated school in 1982 and that was his last year teaching,” Dickens says. “I just showed interest at a young age and went to work in his shop where I learned everything – one thing at a time. Eventually, I got to where I could start my own deal.”

Jay opened Jay Dickens Racing Engines in 1994 and has been at it ever since. The engine machine shop specializes in circle track engines.

“We do mostly late-model dirt, but I’ve done a lot of pavement,” he says. “I’ve done some short track and some NASCAR stuff as well. But primarily our focus today and the last several years has been circle track dirt. We primarily build Chevys and Fords.”

Jay says the shop has been building a lot of wide bore engines in the past, but recently has been working on a number of standard 4.400˝ bore space small block Chevy engines.

“Those run better than anything I’ve ever seen,” Dickens says. “We can’t build them fast enough and all the parts in our engines are custom made.”

“The block comes to us 75% machined,” he says. “We have to do the final deck heights. We have to bore and hone the cylinders and do the cam tunnel, the lifter bores, and the main bearing bores. We have to machine all of the moving parts that go into the block.”

The engine’s crankshaft comes to JDRE from Callies and gets balanced in-house. For the rotating assembly, JDRE uses Dyers rods, Diamond pistons and Total Seal piston rings. From there, the work moves on to the short block.

“The Brodix cylinder heads get CNC’d and then we finish them and do the final cc on the chambers,” Dickens says. “With the technology now in CNC equipment, even our intake manifolds now are split in two halves and they’re CNC’d. It takes a lot of man hours out of the equation.”

Supercharged LS9 Engine
Connect with us