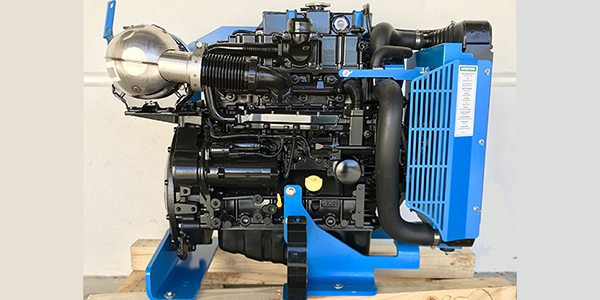 What once was a manufacturer of tractors and farm equipment in Frankfurt, Germany, in 1962, is now an established manufacturer, distributor of diesel engine parts and a fully equipped rebuilder of Deutz diesel engines. Based in Southlake, TX, Memo Corporation uses its extensive knowledge in the European diesel engine sector to specialize in replacement parts and rebuilt engines for Deutz, Volvo, Mercedes-Benz (Detroit Diesel), MAN (International), Kubota and Iveco.

For three decades, Memo’s niche has been to supply replacement parts and rebuilt engines worldwide for Deutz. Memo opened its U.S. distribution center in Southlake, TX, in 1982. As the farming industry slowly diminished, Memo directed its efforts toward heavy-duty diesel engines and parts.

“Back in the late ‘80s, Memo tractors and engines were made in Yugoslavia,” says Ahmed Elborai, senior vice president, Memo Corporation. “The tractor that we were selling at the time was sold under the Memo name. The engine inside of it was a torpedo engine, which was a Deutz licensed air-cooled engine. Due to the wars going on at the time, we basically had no way of getting tractors anymore. We had to reinvent the company, and we moved from selling tractors to selling engine parts.”

As the company evolved, Memo added to its parts sales and decided to start building engines about 20 years ago.

“We had the parts, we knew the engines, so we started building air-cooled engines only,” Elborai says. “Over the years, we got into 1011F/2011 series oil-cooled engines and the 1012/1013/2012 series water-cooled engines. We only rebuild Deutz engines and have built ourselves a little niche as being known for Deutz.”

Deutz engines and parts are used in a wide variety of industries. If one industry is down, many others still need engines.

“If oil and gas are down, Deutz engines are still heavily used in the ground support equipment for airlines,” Gibson says. “They’re also big in the rental market and the agricultural and forestry market.”

Memo recently started rebuilding the 2.9/3.6 Tier 4 water-cooled Deutz engines. One of Memo’s most rebuilt engines is the Deutz 2.9, a diesel engine that comes in two different versions – a D2.9L4, which is naturally aspirated, and a TD2.9L4, which is turbocharged.

“Those are the two main engines we’re seeing now,” Elborai says. “They are Deutz Tier 4 engines, so they’re common rail with EGR systems. The horsepower ranges from 36kw to 55kw (48hp –74hp).”

“Memo is a rebuilder, so we take an engine and tear it all the way down,” Gibson says. “We don’t do the machining in-house, so we send the block, crank and cylinder head out to be magnafluxed, bored and machined as needed. It comes back to our rebuild line, and we have a team that builds the bottom end – putting in the crank, connecting rods, pistons, EGR, oil pump and front cover. They assemble it, then the engine gets passed to another team that completes the top end – the cylinder head, the manifold and other accessories. After this, it goes to another team that preps it for the dyno.”

“On a 2.9, we use parts from all sources, aftermarket and OEM, but we try to go with aftermarket more than OEM,” Elborai says. “We bore the engine oversize 0.5mm, and then we’ll use our pistons with NPR rings.”

With the Deutz 2.9 engine used in so many different applications, the Memo team has seen all kinds of engine issues come through the facility, but has noticed reoccurring issues.

“We’ve noticed the EGR systems get clogged,” Gibson says. “These engines often sit in idle, so carbon builds up really bad. When the EGR gets clogged, it overheats the engine.”

As those issues arise, Memo is there to rebuild these engines and get them back into the many markets in which they’re used, helping businesses keep downtime to a minimum.

A typical rebuilt Deutz engine at Memo takes seven to 10 days, and Memo cranks out around 400-500 engine rebuilds a year.