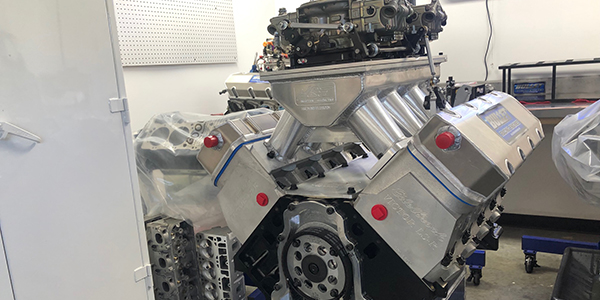 Jim Gray is an engine builder of high end drag race, circle track and street performance engines. When a business partnership in his previous shop, Venom Racing Engines, went south, he sold the shop and was quickly approached by Larry Jeffers with a new opportunity. Larry, who owns Larry Jeffers Race Cars in House Springs, MO, wanted to open an engine shop and have Jim run the show. Jim quickly agreed, and he has spent the last three months running Bullet Racing Engines.

“Larry wanted to start an engine shop, and he said he would buy all the equipment and set it all up if I would come to work for him,” Gray says. “That’s what happened. We’re in full swing doing the same things that I had been doing at Venom only on a larger scale with a lot nicer equipment and a lot more people.”

Bullet Racing Engines is a full machine shop capable of doing all work in-house and has five full-time employees, including an engine builder and machinist named Rob Stidem who is well-known in the area.

“Between his clientele, mine and Larry’s, we’ve really taken off with a good start,” Gray says. “Our engine work here at Bullet is a wider scope of engine work than Venom, but is very similar. We focus mainly on high end, drag race, circle track and street performance engines. We build LS-based engines, small block and big block Chevys, nitrous, turbocharged and supercharged engines, as well as dirt late models and dirt modified. We also have a machine department where we do machining work for other shops too that don’t have all the equipment.”

With everything inside Bullet Racing Engines banging on all cylinders, the shop recently finished up a build for a new customer with his eyes set on setting records in the naturally aspirated small block class at Hot Rod magazine’s Drag Week.

“We have two Drag Week engines in here now that are going together for this year’s Drag Week,” he says. “Both of them are for the naturally aspirated small block class. One of them is a bit more extravagant than the other. It’s an incredible piece. The customer has spent a fortune on it.”

That small fortune is going towards a naturally aspirated 427 cid LS engine with lots of compression and all coated internal parts.

“The Drag Week engine build is for a new customer who was sent to us by another shop that he had contacted about doing it,” Gray says. “He was unaware I did this type of engine work. He had begun the process with another builder who had gotten uncomfortable with it and he was sent to us. We’ve just taken it and ran with it from there.”

The LS engine started with a Dart LS Next block that was machined in-house at Bullet. It has a Jesel belt drive in front, which required additional machining. According to Gray, every piece of this engine build is top notch.

The engine features a billet, eight counterweight Bryant crankshaft, lightweight CP-Carrillo H-beam rods and custom CP pistons with a thermos-coating on the top and anti-friction coating on the skirts, King Racing bearings, Jesel lifters and rockers, and a solid roller Bullet camshaft.

This N/A 427 LS engine will run on gasoline and also has an HRE billet runner tunnel ram intake manifold with two Braswell carburetors on it. The camshaft is .900˝ lift and the compression is 14:1.

“The customer wants to set the record in the small block N/A Drag Week class,” Gray says. He has the engine going in a Fox-body Mustang.”

With well north of 900 horsepower on tap, Drag Week will be in for one heck of a treat when this car flies down the drag strip.