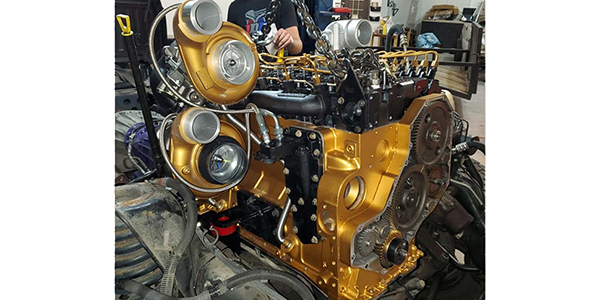 No, that’s not a typo. Tommy Clayton’s Clarksville, TN-based diesel shop, Integrity Diesel Performance, is known for doing its fair share of Cummins swaps. When they swap a Cummins into a Ford, they call them Fummins builds, and they’re pretty awesome. Find out what makes this 12-valve Fummins a special build.

No, that’s not a typo. Tommy Clayton’s Clarksville, TN-based diesel shop, Integrity Diesel Performance, is known for doing its fair share of Cummins swaps. When they swap a Cummins into a Ford, they call them Fummins builds, and they’re pretty awesome.

Tommy Clayton has been into cars and trucks his whole life, and rightfully so. His dad owned a Chevrolet dealership when Tommy was just a kid, which meant Tommy was in the dealership after school, on Saturdays and during summers, helping where he could.

“I was always in the automotive realm,” Clayton says. “I’ve been into hot rods ever since I could drive. In ‘98 and ‘99, I went to Lincoln Tech in Grand Prairie, TX and took the automotive program there. That was my first diesel experience.”

When he moved to Tennessee in the summer of ’99, he worked for a few dealers in the area for a couple years before getting the opportunity to go independent by taking over a shop and its customers.

“I’ve been building engines pretty much my whole career,” Clayton says. “In 2001, I opened Tommy’s Auto Repair. Then, I had Valley Auto Repair in Sparta, TN for almost 10 years. I started Integrity Diesel Performance in 2015. We’ve hit a real niche market with diesel work here. I didn’t even realize how it was going to go. We were willing to go European. We were willing to stick with auto service, but I’ve always done everything, so we put that we did diesel on our signs and our website, and it just blew up. We’re pretty much the primary diesel shop in town now.”

Integrity Diesel Performance (IDP) has six full-time employees, including three techs who specialize in Duramax, Powerstroke and Cummins engines, respectively. The diesel shop operates out of two buildings, which have the capacity for 11 full-size trucks – eight in the back shop and three in the front.

IDP is a complete diesel repair and service facility, which also builds engines in-house for their famed Cummins swaps, for sled trucks and drag trucks, modifications, tuning, turbo swaps, and injector work too. No matter what the job is, however, IDP works as a team.

“We’re all a team here,” Clayton says. “We’re team IDP. We function that way in the shop and in our relationships. If you work here, you’re part of the team, and we do extracurricular things together as well. My son Elijah also works with me. He’s worked with me since he was little – he’s 20 years old now.”

That teamwork mentality recently came in handy when a repeat customer visited the shop tired of having to fix his 6.4L Ford engine. He came to Tommy for a solution.

“The customer is a bomb tech for the military, and he had spent a lot of money keeping his Ford 6.4L going, and his engine went out, again, and he just wanted to do something reliable,” Clayton says. “That’s why we went with the mechanical 12-valve Cummins.”

Tommy knows what he’s talking about, as the 12-valve Cummins inline-six is known for awesome torque figures and has a reputation for being almost unkillable, even after it’s been modified to produce big power – exactly what this customer was looking for.

The customer’s truck is a 2010 Ford F250 King Ranch that is a daily driver and is used often for pulling and towing. With only 109,000 miles on it, this truck was no junker! The F250 is lifted, has custom rims and upgraded suspension – it’s a nice ride, according to Tommy.

That being the case, IDP sold the customer on doing a 12-valve Cummins swap, which the shop calls a Fummins engine build. To start, IDP works with a local machine shop called Richmond’s Machine Shop.

“We bored it .020˝ over,” Clayton says. “We used Mahle Motorsports pistons and ARP bolts all the way through – the mains, rods, head studs, rocker arm bolts – all ARP. When you use ARP, of course, all the machine work has to be torqued, honed and line bored with the ARPs.

“I used a Colt Cams Big Stick, Stage 3 camshaft, Hamilton conical springs, and 24-valve-style, solid lifters. Trevor Manton made us custom pushrods that have the bottom end for the 24-valve-style lifter, but it has the top end for the 12-valve rockers. So that’s kind of custom and a nice little upgrade. We also went with a performance P pump and injectors from Pensacola Diesel, and the compound turbo setup is an S368 over S475 setup for a Cummins swap that we got from Diesel Power Source.”

In addition, the shop used King bearings and decided to keep the stock connecting rods, as they can tolerate 700-750 horsepower, which is more than the customer needed.

The toughest component of the Fummins build was the conversion kit IDP got from Diesel Conversion Specialists, which has a billet adapter plate and flywheel flexplate to bolt up to the 5R110W transmission in the Ford. Everything but cruise control should work when you’re done.

“You basically need a donor truck, not just a Cummins motor, because you’re using the old, ’95-style Dodge AC compressor accelerator cable, and all this stuff that you might not have in preparation for a Cummins swap,” he says. “Also, with the cooling fan, the way they did it, you use the old Dodge one, which is a smaller diameter fan and really doesn’t draw enough air across the condenser for the AC and idle when it’s really hot. We’re having to put in some electric cooling fans. But other than that, the build went pretty smooth.”

To finish out the 12-valve Fummins, IDP added some flare by applying a high-temperature black and gold paint scheme to the engine’s exterior, which matches the customer’s F250 King Ranch. Now that IDP has finished up the Fummins, this diesel engine puts out about 650 horsepower and somewhere between 1,100 and 1,200 ft.-lbs. of torque!